I use my iPod Touch mainly for it’s intended purpose, listening to music, as well as accessing my e-mails, Lovefilm, Amazon and even my bank. It’s true that smart little touchscreen devices have come a huge distance in the last ten years, now functioning like futuristic palmtop computers. One thing I don’t use mine for much is gaming; I find most games use the touchscreen poorly, preferring to project awkward-to-use buttons in the foreground rather than properly use the highly advanced, multi-touch screen and in-built accelerometers.

So it’s odd that I find myself reviewing yet another iOS game, and it’s no surprise that it’s a quirky, mildly original puzzle platformer with a story that makes no sense and all the appeal of a Dali painting on fire. Okay, so maybe I’m being a bit cynical and I should really give Spintrip from Clickgamer.com a fair crack. So here’s my fair crack…

Seriously, what the fuck is going on?

Spintrip doesn’t kick off with a plot intro so much as a collection of random exposition and unfathomable names. In the first 20 seconds I’m expected to understand what everything is, and my entire purpose within the game… which is almost impossible, because said introduction goes something like this:

“The Gants took five of my Shims. Will you help me little ’tisu? Collect all the Chibs you can find, they’ll help you! Use the Chibwheel and get to the Shimloon portals.”

I mean, come on! What the fuck are Gants, Shims and Chibs? What is a Chibwheel? Why does all this matter?! Spintrip fails to convince you that whatever wacky journey it has planned out for you is at all worthwhile. It serves solely to confuse you right away; not a great start.

As the game progresses it doesn’t get any easier. Despite the mass of initial exposition, further information is thin on the ground, and it’s easy to feel like you’re just rolling from one level to another with no purpose or goal. That would be okay if the gameplay was up to scratch; it’s a short, portable game and cannot be expected to have a massive, epic plot. A Shame, then, the gameplay is actually more confusing…

So THAT’s a Chibwheel!
Basically you choose one of two characters, Noss and Lillme, who are male and female respectively but identical in their abilities. Stuck inside a sort of hamster-wheel-thing, you cartwheel about insanely colourful levels collecting stars. Essentially it’s a side-scrolling platformer made overcomplicated and incredibly frustrating by two things. 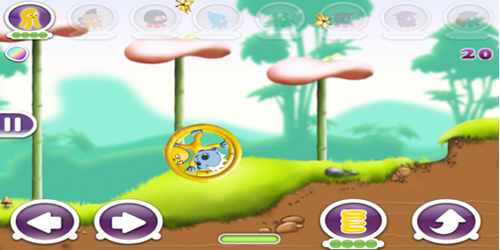 Firstly, the fact that your wheel controls like a greased-up bearing and is about as responsive as a comatose sloth. Despite the game being released solely for the iMachines, all of which have accelerometers, you have to use two on-screen arrows to move about, coupled with probably the worst jump button in the history of mankind. Remember Tomb Raider, where you had to hit ‘jump’ a full five seconds before you wanted Lara to do it, lest you fall to your death?

Well imagine if that jump button was also self-aware, and had settled into an adolescent sulk. Pressing it doesn’t guarantee an action; you can only hope for a response. Most of the time it’s happy to allow you to hop around flat ground no problem, but refuses to work when you actually need to clear a gap. It spites you, proving it can work but neglecting to do so when it’s really needed. Never before have I actually thought of the jump button as an enemy.

Secondly, the chief mechanic that makes Spintrip more than just a poorly executed platformer is the necessity of Chibs. These bizarre creatures can be collected and stored in your Chibwheel, much like an old lady driving around town collecting stray cats. Each one gives you an ability that’s needed to progress, and this is where it gets ridiculous. There are eight kinds of Chib and while you can have them all in your corral at once, you can only have one ability selected at a time. This is executed by a slightly more responsive on-screen button, and the powers are chosen from a bar at the top of the screen.

Your wheel moves so fast, and things pop up so quickly, that you have to hastily tap the right icon to select the right power, then just as quickly hit the button to use it. Most of the time you fail initially, falling down a gap or taking damage from an enemy because you couldn’t select the ‘High Jump’ or ‘Spitter Chibs’ quick enough.

It’s a constant panic, jabbing at the lazy buttons in the hope of picking the right Chib in time so you don’t have to fall, die or sink. It breaks up the gameplay and makes almost every second tedious. Just when you think you’ve got a rhythm going, you have to stop, jab a ‘Chib’ button 5 times, then jab the ‘Use’ button a similar number of times, then move on. Couple this with the senseless story, and I can find very little reason to play this game at all.

Is that a blue baby in a wheel?
Graphics-wise, Spintrip doesn’t look awful. The cartoony backgrounds scroll along nicely and each level has its own design and vibe about it. The colour palette is akin to a 3-year-old’s crayon box gone all mushy in the sun, but it kind of fits the setting despite giving me a headache after a while.

The character design is nothing short of barmy. Our two heroes look like blue, deformed children in garish yellow baby-grows, or ‘onesies’ as fashion twats like to call them. They grin maniacally through every single second of the game, seemingly immune to the sickness-inducing spinning of the wheel. Eyes wide open they weirdly gyrate in the wheel, obviously garnering immense pleasure from the experience but being unable to express it any other way than that creepy grin.

The Chibs aren’t much better, looking like sad rejects from In The Night Garden. I can imagine Iggle Piggle looking them over, one by one, and declaring them not cute enough, or weird enough, or what ever the criteria is for being allowed to reside in the Garden. Downcast and still desperate to inhabit some sort of head-wrecking children’s nightmare, they found a home here. Consisting basically of eight amorphous, coloured blobs, some with tentacles and other protrusions, their only form of personality is their various powers. 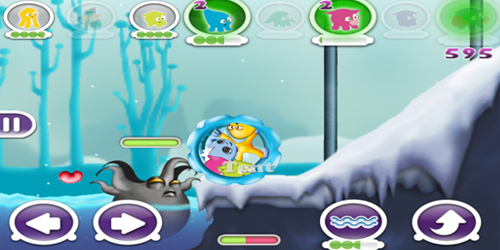 I beg you, fat, blind octopus. Pull him in. End my torment...

Enemies consist of black jelly beans and other indescribable… well blobs. Everything in this game is a fucking blob! It’s like Clickgamer just let Tumble Tots go ape with finger painting and used the messy results as concept art. It seems like some hugely misguided attempt to create a new cast of horrific kids characters and give Iggle Piggle et al a run for their money. Instead it just looks lazy and pathetic.

Tommy, get off the glockenspiel!
The sickness carries over to the sound too. Everything is seemingly a sample from a bunch of under-developed toddlers.

Every action of Chib and enemy comes complete with a sickly, twee gurgle or squeal from some kid somewhere. The Chibs all make sounds like babies being poked or tickled, each checkpoint calls in a child’s ‘woo’ noise and the enemies gurgle about with the menace of a mother playing with her new-born. It’s like being stuck in a room full of kids, none of whom belong to you, while a delusional children’s entertainer cavorts around attacking them with a feather and making stupid faces at them to illicit auditory reactions.

The music is a similar experience, only with added glockenspiel. A seemingly random collection of notes that follow no pattern, scale or rhythm constantly tumble out of the speakers, underpinned by tedious FX sweeps. I can’t even imagine what they were thinking; it was probably an afterthought.

Ok, I get it! It’s supposed to be for/about/made by kids!
I think I can sift through the mountain of shit Spintrip has thrown my way and come to a sort of realisation. This game was designed to be a child’s world, as if children made it. Very small children. Everything is happy; even the enemies look about as threatening as the family dog. The colour scheme is vomit-inducing for me, a 22 year-old man, but to a 3 year-old it would seem wondrous. The music is like a primary school World Music lesson, and all other audio is the sounds children make when they’re stimulated. I get it; it’s supposed to be for kids. It’s supposed to seem like they could have made it, like some sort of 21st-century middle-class school project.

The fact is, kids didn’t make this; adults did. The actual mechanics are so unresponsive and complicated that I can’t imagine anyone below the age of ten being able to get on with it, so they immediately alienate their intended target market. Parents will be turned off by the overbearing kiddie theme that oozes from every pore of Spintrip, and older kids won’t play it because it’s babyish and shit (and these days everyone over the age of 12 is playing COD). It’s not even relaxing; the relentlessly awful controls and irritating sound effects see to that.

I honestly can’t think of any reason to recommend this to anyone. A potentially innovative concept is marred by shockingly bad execution and an apocalyptically misguided design direction. It plain doesn’t work, and its charms are way below the level to allow anyone to gloss over this. Don’t waste your money; there are plenty of better games on the App Store that your kids can grease up your iPad screen playing.