For modern-day gamers, it’s probably hard not to picture Sam Fisher as a Jack Bauer-esque, off-the-rails; hard-ass who smashes criminals up against glass mirror panes and flushes their face down the toilet. However, there was life before Fisher’s transformation into a ruthless renegade with a zest for conviction, and it materialised around eight years ago.

Back then, we were playing with a different Sam Fisher. Instead of seeing bloodshot eyes and a midnight shadow, we were playing an experienced veteran, kitted out with tri-focal goggles, and tasked with figure-heading a new government operation. He was a by-the-book professional and the absolute best in the field. There was no way the government would allow a simple detail like retirement get in the way of re-enlisting their golden boy.

These were the beginnings of Splinter Cell, and the surging popularity of the stealth genre on consoles. Deservedly so, this one was a firm favourite of mine and while it never overshadowed the love I had in my heart for Thief: The Dark Project, I have nothing but fond memories of the first time I fired this up on Microsoft’s overweight black brick!

It was just missing one very important ingredient: High Definition. A detail that was but a generation away. Now that Ubisoft have finally given it the green-light eight years on, we ask ourselves, was it worth the wait?

Retro remakes are gaming’s current hot potato. It’s as big of a deal for a developer to release a last-gen game with new spit and polish, as it is to launch a new instalment in a successful IP. In fact, some of the most anticipated titles this year are remakes, Halo: Combat Evolved HD, Metal Gear Solid Collection, Silent Hill Collection and Goldeneye Reloaded, to name but a few.

However, there’s a big difference between essentially re-launching a game, and rebooting it. Where Halo and Goldeneye have been redeveloped from the ground up, Splinter Cell and Metal Gear are the same games that were released last gen, but with a reconfigured graphics set.

There-in lies my problem. Splinter Cell HD feels rushed and thrown out of the door. It feels like a way to make a quick buck, capitalizing on consumer’s desire to lap up a piece of history, rather than respecting the legacy and heritage that the game initially carved out for itself. Sure, the game comes with HD and 3D support in an effort to try to modernise it as much as possible, but it looks ugly and genuinely unsuited to the engine. 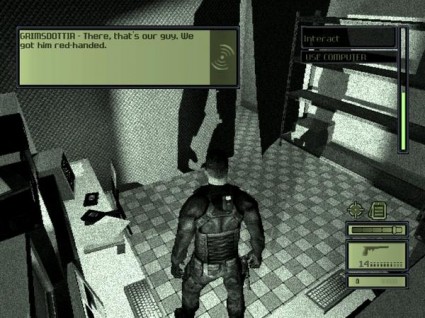 Bathroom conference calls are the way of the future.

Unlike the game’s look, the plot remains unchanged. Sam Fisher is a retired agent that has been called in by his old friend, Irving Lambet to spearhead a new undercover government operation, known as Splinter Cell. Fisher hasn’t been in the field in years, but has still been headhunted as the best man for the job. The president of Georgia has been assassinated in a suicide bomb attack, which allows Georgian billionaire, Kombayn Nikoladze, to assume control of the country. Fisher’s first assignment is to find two missing CIA operatives who have been connected with Nikoladze, one of whom secured a role in Nikoladze’s political cabinet. However, as Fisher starts to peel back the layers, and discovers the dead bodies of both agents, he realises a deeper problem lies underneath the surface, one that could potentially lead to World War III.

Fishing with Fisher
Splinter Cell lives, breathes and bleeds stealth. It is the game’s core mechanic. So much so that if you attempt a head-on collision with an enemy, you’re liable to find yourself in the morgue a millisecond later. If that doesn’t sound like you, you’re not going to have any fun here.

The game essentially plays the same as it did back ten years ago. Sam Fisher needs to use light and dark areas effectively so that he can successfully infiltrate buildings undetected, and spy on his enemies to learn more about this global conspiracy. Sam has several gadgets at his disposal to help keep his presence completely anonymous (such as night and thermal vision, silenced pistols, scopes which can be placed underneath a door to see who’s on the other side, and, at a last resort, flash-bang grenades). 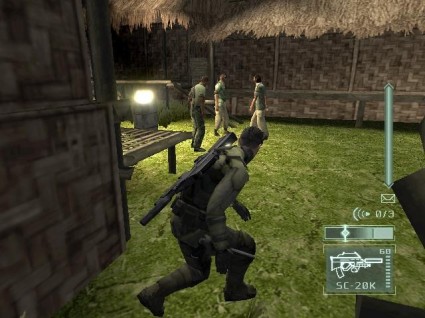 That's the name of the game.

Sam also has several gadgets which are used for the espionage elements of his mission. One in particular is a portable microphone which can be aimed at an area of a building, and will transmit any audio heard within that area straight to Sam’s Op-Sat. This allows him to keep a safe distance from his foes, but to hear them as crystal clear as if he was stood right next to them. Handy, if you ever want to know what people are saying behind your back in the office.

Splinter Cell encourages you to use the environment to your advantage, and much like Deus Ex, allows the player to find alternative paths to their destination, whether that means they have to climb up on drainpipes, sneak through ventilation shafts, or zip-line through the skies. You’re encouraged to make as much use of the terrain as you can, although when compared to more modern-day offerings, it’s much more linear.

Splinter Cell was an unforgiving beast on Xbox, and widely regarded as one of the most challenging games on the system. While that still rings true today, a big part of that reason was down to the checkpoint system, and the distance between them in each level. This is where Ubisoft have introduced the best element of this HD remake: Quick-Saving and Quick-Loading. It’s an absolute godsend, and truly does make a big difference to how this game is played. Even though the graphics are an eye-sore to look at, the quick-play implementation make this devilishly challenging original a much more tameable, and ultimately more enjoyable beast.

Fear of the dark!
Frankly, Ubisoft would have been better served starting the game from scratch using the Conviction engine and recreating the game as Activision are doing with Goldeneye. While they’ve done an okay job of trying to bring Splinter Cell up to date, the graphics just look ugly and seem out-of-place, jarred and blocky. Unfortunately, the modified Unreal Engine 2 is starting to show its age, and no amount of HD updating is going to be able to conceal that fact. In fact, it makes the case in point seem even more obvious.

Regardless of the age, as I alluded to earlier, the game still works a charm. Light and darkness is integral to your survival in Splinter Cell. Stick to the shadows in your black, lycra suit, you may as well be a ghost. Stumble into a spotlight, you’re liable to get a bullet through the head. Splinter Cell is merciless, and you will constantly need to keep up with its pace and remain aware of your surroundings if you want to make it to the end.

Unfortunately, I don’t have a 3D capable television, so I couldn’t test the game’s 3D. However, if my experiences with the normal graphics were anything to go by, I’m willing to bet I didn’t miss much. 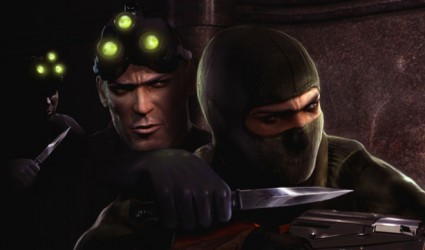 Whispers in the dark
It never gets old hearing Michael Ironside creating vocal magic with Sam Fisher. Even in an aging game, he still helps depict a perfect balance of drama and suspense. Sam Fisher is a multi-layered, intricate character, but it is Ironside’s portrayal that helps bring each layer to life. If there’s one element to Splinter Cell that has aged gracefully, it’s the hard-hitting, fast-paced story telling, told through masterful voice-acting.

Much like the graphics, sound is a key gameplay tool in Splinter Cell. Much of the time you rely on sound to tell you where you are in relation to the enemy, whether your footsteps are too loud, or if your gun is drawing too much attention. Sound is your friend, as much as it is your enemy. Splinter Cell was a pioneer for the importance of sound in games, and that is as true now, as it was almost a decade ago.

From darkness comes light…
On one hand, I would happily call this the definitive version of the game because of the quick save/load functionality. It instantly erases some of the major frustrations that prevented the original game from perfection. On the other, I’d say that in trying to modernise Splinter Cell, Ubisoft have detracted from its overall quality.

Splinter Cell is a fantastic game, with a great story, and is still a true master-class in gaming stealth. That said, you may be better off sampling it first, as the new graphical update is more of a distraction from this great game, than if you were playing it with its original graphic set.