You know the guy who gets beat in fighting games amidst a whirlwind of combos, special moves and finishers in ten seconds flat? That’s not quite me, but I’m only the next tier up from that. I don’t own an arcade stick or a rapid-fire controller, nor do I possess a strategy guide with all the answers; I’m just a dude with a pad and a fuck-ton of patience…

Believe me; you’ll need that with Street Fighter III: 3rd Strike. Balanced it might be, but this one will go down in history as one of the toughest fighting experiences on the market. It’s sink or swim, do or die; there’s no middle ground.

I’m about to dive right in…

Bring the pain
So, why are we bothering with a twelve year old 2D fighting game, anyway? The beat-em-up market has moved on and is incredibly competitive now, with comic book character collaborations and glorified 3D visuals. I know we’re in the age of retro remakes and downloadable titles, but why this, Capcom, and why now?

Well, one reason in favour of this would be that Street Fighter III is considered to be a flawless fighting experience, and one of the greatest beat-em-ups ever made. When you consider the heritage, that’s a lofty claim. However, when you don the pad and get in the action, even though you can see the game strain trying to keep up with today’s mammoth processing power, you can tell there’s still something really special about the end product.

Street Fighter III is as much of a change for the series as Street Fighter II was from 1. The most notable change, of course, is that the majority of the established roster has been thrown out and changed, with only Ryu, Ken and Chun Li representing the old guard.

Street Fighter III’s new cast is figure-headed by Alex, a powerful grappler who is on a quest for revenge. He’s joined by other new characters, including Sean, Dudley, Necro and Hugo, all of whom offer something very different to the series. 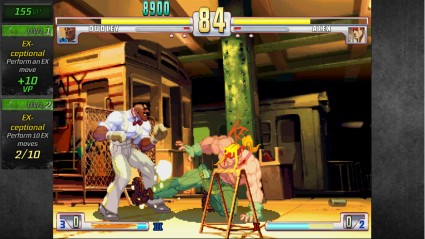 It’s not just the gallery ensemble that’s different, though. SFIII also has significant gameplay changes. Unlike before, you can dash toward your opponent, or retreat just as quickly. You can also execute high jumps, or flip up quickly to your feet if knocked down by your opponent. Also, for the first time in a Street Fighter game, you can parry your enemy’s attack. This means that you can receive no damage from an incoming onslaught, and then counterattack your dazed opponent with a barrage of your own. Parrying isn’t just effective against punches and kicks, however; it can also be used to deflect special moves, all without the sacrifice of losing even a fraction of your health.

There are also such things as Super Arts, which are character-specific special combos. When choosing your character at the selection screen, you’ll be given the choice of selecting one of three Super Arts to take into the fight with you. You can only use your Super Arts combo once its designated gauge has been filled during the fight. However, you should be cautious. Each Super Art has a specific gauge requirement, and to use some moves, filling up the gauge will take a longer amount of time than on others. So, choose wisely… 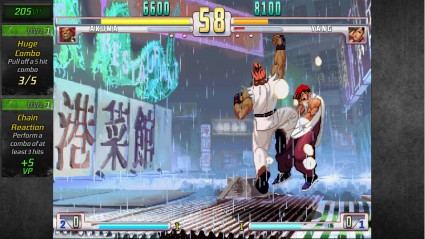 Tiger Upper-what?
Despite the changes, this is still just a straight up, one on one, fighting game. No tag teams or handicaps, just move for move action, and this is as good as it comes. That’s not just locally, or online, however; the single-player portion of 3rd Strike is just as fulfilling.

There’s the standard arcade mode, which allows you to go through a sea of challengers, until you fight Gill at the end. The arcade experience will change depending on who you play, as the game will always try to put you against someone who goes against your fighting style to ensure that each playthrough is a challenging one. When going through the qualifying stages, though, you can actually select who you want to face between two scheduled opponents. Dependant on how you play, there may be an easier option between the two choices, but generally, they will still kick your ass, no matter what difficulty you’ve got 3rd Strike set to.

Each time you fight, there will be a column on the left hand side which details available challenges for you to complete, descriptions on how to do them, and how close you are to achieving them. Once a challenge has been completed (it can be simple as landing a special move or as complex as performing a multi-hit combo) you will gain VP, and improve your rank. Your overall rank is compared via the game’s (rather mentally competitive) leaderboard, which can be customised to just compare against your friends or the rest of the world. Also, the VP you earn can be used to spend on things in the game’s vault, which includes concept art, new stages, music and each character’s cinematic ending!

The game also offers you a Trial mode. Here, you can go up against a makeshift opponent, and the game will tell you to perform a fixed action against them. This works for the most basic of moves, all the way to the most complex, and it is an excellent way for you to familiarise yourself with the game. Training offers something similar, but it’s a more direct way for you to just spar with a friend. However, 3rd Strike also allows you to record your sparring sessions, save them, and play them back at any time, so you can study your fighting style and figure out ways to improve.

After every fight, 3rd Strike will grade your performance, based on your offense, defence and Ex-Points. It will then give you an overall grade. You’ll also be graded on how you performed throughout the tournament, so if you’re a consistent A+ student, expect to be revealed as such when the end credits roll. Once again, it’s all about a learning curve; while 3rd Strike is a tough beast to tame, it’s all about teaching you the ropes and helping you get better with time.

Other notable inclusions see a ‘Beat the Car’ Bonus Stage, which will be familiar to Street Fighter fans, and a basketball game, where you have to parry the ball back to your opponent on the other side of the net!

Personally, I had a much easier time controlling the game using the D-Pad. Others may feel differently; however, I found the game more responsive to my actions when I used it, as opposed to the analog. Naturally, however, the game will come to life if used with a proper arcade joystick, just like being back in the Arcades. 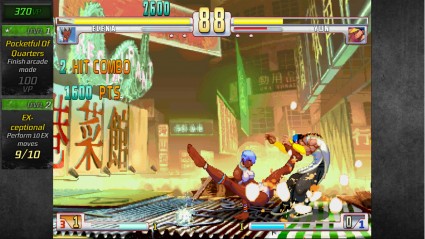 The weird and wonderful
Street Fighter has always been renowned for its vibrancy and ‘attractive to the eye’ quality, and that’s never been more apparent than it is here. SFIII uses the CPS III engine, which allows for more detailed, thriving 2D sprites than its predecessors. In addition to making 2D models less static and zombie-like, the engine allows a character to turn around after being hit. Obviously, things have rapidly progressed in twelve years, and these are details we take for granted now, but in 1997, this engine was a massive breakthrough.

3rd Strike also has a much more colourful cast than any other Street Fighter game before it. It brings the freak show, with oddities like the tall, brooding, trenchcoat-wearing Q; the extra-terrestrial look-a-like, Twelve; the goblin-like Necro; and Hu – ‘Don’t call me Andre The Giant’ – go.

Even now, the models are all very distinctive, polished and elegant, and all offer something very unique to a franchise that has prided itself on the weird and wonderful. Even twelve years on, this one is still a beaut..

Hark now; hear the fighters scream…
Running parallel with the wacky look of the game, SFIII also produces some equally crazy sound effects. Sure; you’ll get the conventional grunts and groans, but when you’re listening to Necro zip around the screen, or hear Twelve as he’s shapeshifting, the game manages to effortlessly blend reality and fiction and make it seem utterly plausible. Of course, the graphics go a long way towards enforcing that, but it’s also the sound that keeps things regulated and helps them to make sense in this quirky environment.

The music is a real mixed bag as well. While there’s a lot of drum and bass playing in the background, on some stages you’ll get some hip-hop influences, and on others, there’s even a jazzy vibe. 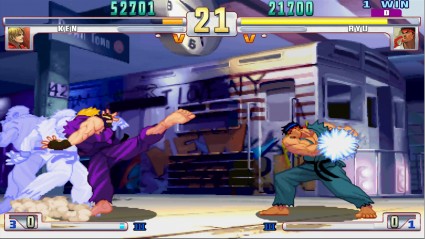 I don’t need to stare you in the face to kick your ass
Online is obviously the massive new feature here. There’s always a fear that when slapping on an online mode to an old game, it’s not going to take to it very well. Just look at Mortal Kombat Kollection. But here, it’s as if they were born to be together. The transition is excellent, and feels as smooth as if it were being added to any game coming out on the market today. There’s the odd stutter (that’s to be expected), but generally it’s a smooth experience, and one that offers more opportunity than ever for you to face anyone in the world, in one of the most prolific beat-em-up arenas of all time.

As you play online, so you can help improve your overall ranking, collect VP points, and, of course, work on your Win/Loss Ratio. Obviously, this isn’t the most detailed online experience you can find in the genre, but it’s an excellent new add-on to an already brilliant game.

Back for more?
3rd Strike is balanced brilliantly, it handles very well on Playstation 3, and is as good of a port as Capcom could have possibly made. It’s still a real challenge to play, no matter which difficulty you select. Yet the beauty of 3rd Strike is that the more you play, the more you learn, and the more you’ll grow, develop, and eventually improve.

There are a lot of old games coming back just to give you that quick retro hit, but Street Fighter III: 3rd Strike Online Edition goes further than that. It doesn’t push the boundaries like it did back in 1997, but it’s still one of the very best in its class. Unlike some other games which have received the re-launch treatment this year, it’s aged quite gracefully, thank you very much.