I love bacon, and I know I’m not alone. Hell, even the veggies like bacon! So, one has to wonder, what isn’t there to like about a game called The Baconing? Surely, it will be filled with slices of pig, all frazzled and fried into streaky meaty goodness, ripe for sticking between two slices of bread with some brown sauce for a good, early morning hangover cure. Surely, the Armageddon of our world wouldn’t be so bad if we were to be engulfed by hog?

Well, Hothead Games clearly think so, and obviously have a phobia of Trotters and Troughs, as they’ve tasked their intrepid hero, DeathSpank, to rid the World of such an impending doom. However, with this being his third outing, and with such a hero being compared to bacon, one has to wonder, is Spanky-two-hands the one overstaying his welcome?

Frazzles!
The oddest thing about The Baconing (aside from its name, of course…) is the omission of the DeathSpank name from the title. It’s almost as if EA wanted to rebrand and start anew with the series, even though, The Baconing starts almost immediately after the events of Throngs of Virtue. The game has been made stand-alone enough that you will be able to follow what’s going on, but part of the appeal of DeathSpank is having some familiarity with his character, and, you know, the whole premise of the Baconing is largely to do with the events that occurred in the second game.

Rest assured people, this is a DeathSpank game, even if it doesn’t have his name slathered all over the title. It’s the third instalment of the series, and if you’re a fan, you should be considering it.

The game begins with DeathSpank sitting on his throne, having vanquished all the foes in the land. Basically, he’s kicked complete and utter arse. He’s dominated the dorld, rid it of maleficent beings and is a true superhero now. Nobody in their right mind would dare challenge his might.

One day, it all becomes too much, and to relive the glory days, DeathSpank wears all six Throngs of Virtue at one time, hoping it will remind him of times better spent. The problem is, Spanky clearly didn’t read the small print, and by wearing all the Throngs of Virtue at the same time, he creates an evil incantation of himself called the AntiSpank. Suddenly, the people and world he has sworn to protect are under attack, and DeathSpank is thrown back into action!

His quest? Destroy the very things he sought to collect in the second game, so he can weaken his evil counterpart and restore peace once again. Oh, the irony… 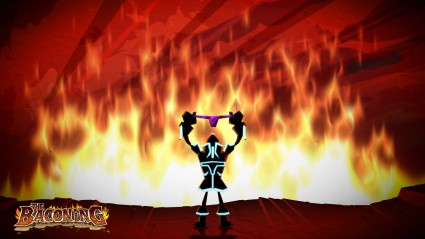 Spank tank
I’ll just clear this up for you right away. If you’ve played the previous DeathSpank games, then you’ll know exactly what is going on here and instantly feel right at home. If you haven’t, you better read on.

The DeathSpank games are action RPGs. You collect quests from townsfolk, aliens, even cows, go out into the world doing as they ask (whether it is collecting blood samples, killing x amount of enemies or fulfilling any number of set requirements), hand your quest in, and gain XP and loot. It’s like playing an MMO without the online component, but there’s an over-arching narrative dictating the action throughout.

Of course, sewn in between all of that is combat, and plenty of it. At this point, however, DeathSpank turns into a bit of a button-masher, and doesn’t really favour strategy and skill, over pure button pressing and health potion popping. The combat is something that’s always been a bit hit and miss for me in DeathSpank. It’s interactive and it works, yet I’ve always felt a bit disconnected from it, as it is quite shallow. Deathspank can go in mêlée and swing his sword or axe, or he can shoot from range with a crossbow. Later on though, the game introduces some really wacky weaponry that perfectly thrives in its sci-fi setting, and accommodates both mêlée and ranged warriors.

The game’s combat will really test your resolve, so you should always make sure your armour is tiered to the type of enemies you go up against. You can either do this by collecting the armour dropped from fallen enemies or by using items given to you as quest rewards. As with MMOs, all armour has stats which will increase different aspects of your character’s overall foundation. Additions to strength, endurance, health, dexterity are evenly distributed between breast plates, helmets and even boots, each offering something more to the overall template that is your customised DeathSpank.

You’re not solely dependent on your garments, however; one great new feature is the Shield Bash, which allows you to put distance between you and your enemies if the action gets hot and heavy. This is a great blocking mechanic, which will probably save your life more than once, and is something previous DeathSpank games could definitely have benefitted from.

Also, as you gain XP so you level up, and upon doing so, you can also add perks to your arsenal. Usually, though, the perks are quite uninspiring, and range from allowing DeathSpank to run faster, to reflecting health. Unfortunately, assigning specific perks doesn’t require much thought, which I know is something a lot of people like about MMOs, ensuring they get their character balance just right.

The only other feature that seems to have improved in this version of DeathSpank are the Justice Attacks. They’re much bigger and badder now, and you can even summon in a dragon air strike, whereas in previous games, a massive hammer attack was all it had to offer. However, they only break up the slog-like action for the briefest time, and then shortly after that, it’s back to the grind. 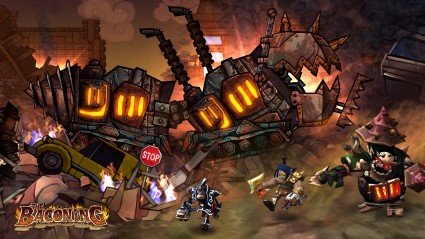 Look at the glint in my teeth
The Baconing doesn’t really look any different from its predecessor. It’s still quirky and colourful, and does wonders in creating strange places and unusual environments, however, it’s a style we’re used to, and doesn’t seem to have progressed as far forward as it should have at this stage of the series. While the art style of DeathSpank is very distinctive in today’s market, and still looks great, it’s just the same as it has always been, and almost seems too stubborn to progress past this point.

Gristle and grunt
DeathSpank’s voice is either going to annoy you in the first five minutes, or you’re going to get on with it just fine. His delivery of the dialogue is still as priceless as ever, but it’s still the same kind of humour that has defined the series. The quirky cast of characters in DeathSpank remain, with everything from cows, aliens, young girls that sound like boys and weedy men with a deep, rugged voice. It’s an ensemble that certainly doesn’t seem out-of-place in The Baconing.

Additionally, the script is as wacky as ever. Yet, it is conspicuous by the absence of the legendary Ron Gilbert. Ron is fondly remembered for creating The Secret of Monkey Island, as well as many other classic Lucasarts titles. His wit was extremely evident all over the first two DeathSpank games, and while this one still makes you chuckle, it’s doesn’t seem quite the same without him. As such, I feel the game has lost some of its charm, and definitely feels like a series in decline.

I’m a mighty hero… and I don’t need no stinking sidekick
As with Throngs of Virtue, The Baconing supports drop in/drop out co-op. Player one gets to play as the mighty DeathSpank, and the second player can play as one of four sidekicks. How many heroes can say they have four sidekicks to call upon at any one moment?

The action works pretty well, although you do use the one screen together and sometimes have to wait on each other to get where you want to go. It’s nice to be able to play the game with a friend, but ultimately, it feels like a mode that’s just been put into the game, rather than one that’s been given a lot of thought.

Happy as a pig in sh**?
This is one of those games where all three TIMJ Medals could apply…

In truth, despite some slight changes to the existing formula, and a new story, there’s really nothing new to see here. Whereas some series’ get better and better with each instalment, the third DeathSpank title just gives you more of the same. It’s also quite baffling, as, despite deciding to rebrand the series, this is not a good entry point for people just getting into DeathSpank. In fact, playing this as a new-starter would probably put them off for life.

The Baconing is not the mouth-watering experience we all hoped it would be, and now seems to be more of a dry and crispy afterthought. It’s still a good game with an entertaining story, and a wealth of content, but it’s a series that is beginning to wear out its welcome and one that probably shouldn’t get a forth instalment…