Robbie Williams is a musical figure you’re either going to love or hate. While Brits revere him, Americans seem quite indifferent. What one cannot deny, however, is his meteoric rise to superstardom, his string of #1 hit singles that fill dance floors on every continent and his personality which seems to merit him endless attention. It’s a natural fit, therefore, for a man who has so many songs to his name and such a committed fanbase behind him, to get his own version of a karaoke sing-a-long just in time for Christmas. The Wii is certainly an ideal platform to support that. With this one sure to be a favourite on people’s Christmas lists, This Is My Joystick asks the question; is it worth your time or does this one deserve to be bumped off in favour of something else?

2010 has been a comeback year for Robbie after he decided to start chasing UFO’s, looking for signs in crop circles, growing a full-on beard and living the Capital Wasteland lifestyle wasn’t really cutting it for him any more. With a new album, a reunion with Take That and a comeback tour next year, it seems things are back in full-swing for the man who shares the same initials as me (although, I carry them better and do more with them. Naturally…). Not only that, 2010 represents his 20 year anniversary in the business! So, what better time to launch this next instalment in the We Sing series and have him as the headliner?

It’s a shame then that this game doesn’t really care too much about Robbie’s comeback story. In fact, there’s no story here at all. You don’t play as Robbie and go on a Worldwide conquest to sing your tunes to both adoring and ill-advised fanbases in various venues to raise your profile and achieve world domination as the definitive pop star. You don’t play as a roadie as part of his team making sure his stage is set up to precision before his performance each night, ensuring fireworks don’t go off in his face causing him to scream expletives into the microphone instead of that rendition of Eternity you were hoping for. You don’t play as his mum making his tea each night, providing him with enough carbohydrates, fats, proteins and minerals in each meal, picking his favourite foods. You don’t even play as his wife and have to perform… favours… for Mr Williams in an effort to…

Sing when you’re winning!
Yeah ok, this is reaching the realms of morbid pornography but hopefully you get the message, We Sing Robbie Williams is about singing along to the songs of Robbie Williams and nothing else. The track plays, the video is on in the background, the words show up on the screen and you will need to sing them in time and in tune. If you’re a Robbie fan, you’ll find most of his memorable tunes are in here and there’s not a lot left missing from the game, even his new single, Shame, with Gary Barlow, which has been used to relight the fire with Take That, is available to unlock for your vocal pleasure. Although, I was more than a little bit surprised that Millennium, one of Robbie’s biggest tracks was nowhere to be found. Perhaps this leaves the floor open to future DLC?

In addition to all of this, the game offers you singing lessons, so it teaches you how to tune yourself using the Solfege Scale (something you might be familiar with if you’ve ever watched The Sound of Music) and sing along to each Robbie song as faithfully as possible. The game also offers a full photo gallery, ranging from the early days of Robbie’s career to the present. There are a total of 33 in-game achievements and there is even footage from the 2003 Knebworth concert which almost makes the game a blatant attempt at Advertising Space, wouldn’t you say? 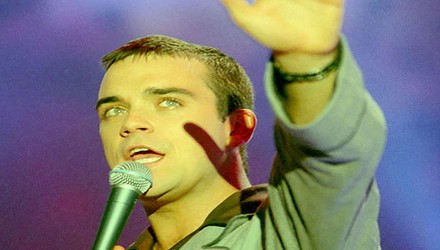 Robbie actually decided to sing 'Angels' live for the first time ever!

Something beautiful?
Robbie is a vibrant individual and the game definitely showcases some of his imaginative, wild music videos. Everything from being a member of Kiss, to boogying on the dance floor having torn his skin off. He’s tried animation in his videos and  even dressed up as a member of the Rat Pack. The music videos are enough of a celebration of him as an entertainer as they are of his vocal prowess. I actually find some of these quite entertaining to watch and found myself forgetting to sing a few times just watching the videos unfold. The music videos are probably my favourite part of the package and it’s nice to see those songs put together on one disc.

Your guide through the game also turns out to be a mini Mii version of Robbie who watches your actions as you roll through the screens. He also looks surprisingly tough, so you probably don’t want to go around calling him ‘Shorty’ and prodding him with your cursor either, else he may kick you out of his game. Just bear that in mind! 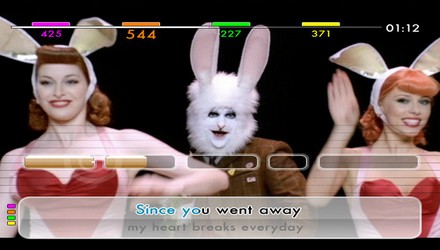 Somethin’ stupid?
Of course, the sound in this game will be subject to opinion. You either like Robbie or still think of him as the fat dancer from Take That. I’m not the biggest fan of Robbie (therefore some might ask why I’m reviewing this game when they could do a better job?) yet I’ve found myself singing along to many of his songs while I’ve been on a night out, subconsciously or not and therefore found singing along in this game to be quite easygoing.

Although, while this isn’t a fault of the game, because the Wii doesn’t enable the use of a High Def cable, I’ve noticed having transferred over from Xbox and PS3, that the Wii’s sound and graphical systems do seem more dated than ever. I’m so used to playing in high definition now, that I do notice big differences when playing games on Wii. As such, the sound in-game, while it is still very good, does seem very muffled to me and isn’t as crisp as it could or should be. Once again, this isn’t, as such a criticism of the game but more about the limitations of the hardware the game has been developed for. I just happened to notice the differences in the sound more having played We Sing Robbie Williams than perhaps I did when I played Ivy the Kiwi and Smash Brothers a little while back.

Let me entertain you!
There’s a lot of multiplayer variety offered here and the game is definitely suited for the party-based experience. You can have a simple ‘Pass the Mic’ mode, whereby you only need one microphone plugged in and up to four of you can sing a bit of the song each. Then there’s the Versus mode where you can sing the same song and the person with the most points at the end wins. You have Group Battle, which is similar but enables you to sing the song as groups against each other. There’s ‘Blind’ mode where you sing the song against each other as normal, but at a random point in the song, the lyrics and sound will disappear and you will need to take over! There’s even Expert mode and up to four of you will compete with no lyrics or pitch bars on screen.

All in all, there are eight different multiplayer modes and ultimately this is where the game thrives when it is experienced by a group of you!

You were there for Summer Dreaming but did you give me what I need?
There’s no getting out of it, We Sing Robbie Williams is a party game at heart. It’s not designed to be an elaborate gaming experience you’re going to spend hours upon hours on, day to day (unless you’re really into Robbie’s voice and videos). This is designed for a group of people coming together who are a bit drunk and want a laugh, or for a family who want to do something together. It’s what it says on the tin and isn’t trying to be anything more or less than that. If you like that kind of thing, if you’re a fan of Mr ‘I used to be in Take That then left and am now back in Take That’ music and singing is your vice, then this is definitely your thing.

When you look at it as a party game experience, there are better games out there that can involve everyone. Because the game is dependant and reliant on one artist, if you’re not a fan of Robbie’s music, then this just won’t interest you. Unfortunately with the likes of Rock Band, Singstar and Lips out there, offering very diverse catalogues between them, they do best cater to the variety of musical tastes many people have in today’s society. That being said, as far as Robbie Williams is concerned, you will not find a better package out there to celebrate  his music, this is very comprehensive and somewhat of a ‘wet dream’ for his fans.

As a party game experience, for me, I can only recommend you Try It as other games of a similar ilk can simply offer me more and the lack of diversity in the game grew old for me. I prefer games with a mixed catalogue of artists and musical ranges. That said, if you’re a fan of Robbie’s music, you should definitely buy this as it really celebrates his work, and if you’re not, obviously, you should stay far away.