Do you have at least three friends who enjoy playing video games?  Hopefully you do, because if you’re interested in playing Shoot Many Robots, you’re going to need all three of them. This side-scrolling, ‘bot-shooting mayhem of a game will require all four of you to be ready to kick some robot tail.

The game is one big parody of the American South, and it’s a hilarious romp. It’s not the best multiplayer game I’ve ever played, but it’s a pretty good time and a good way for friends to have fun killing robots together.

There isn’t much of a backstory set up by the game. Simply put, you play as one of four stereotypical American redneck characters, running around by yourself or with friends shooting robots. Though the ‘by yourself’ option is very iffy; this is a really hard game to play without at least another person.

It’s a pretty funny game, too; although what would you expect from a game that includes ‘Patriotism’ as one of its weapons stats? Simply sitting in the shop menu reading the descriptions of the weapons and equipment is a fun time. There’s a lot of American pop culture references thrown in, too. To best enjoy this game’s brand of funny, being a Southerner like myself, or at least knowing some about the American South, is a plus. 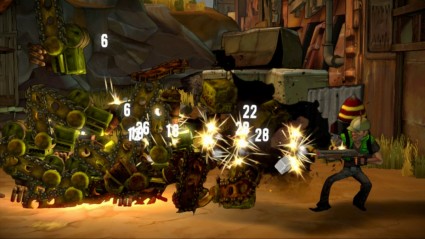 Does what it says on the tin...

Shoot ‘em, cowboy
The game contains multiple levels which are different locations in ‘Robot Country’. To unlock more levels, the player collects nuts which earns them stars, of which unlock the next location. They can also be used to buy new weapons and pieces of outfits for the characters to use and wear. There are a lot of options, and they’re all funny to boot.

As the game goes on, the enemies and bosses the players face become more complex, and eventually ‘boss’ characters become normal enemies who appear time to time. The game has Resident Evil-esque hordes of robots which will come after you again and again, and each wave is stronger and bigger. If you survive to the end, you’re either skilled or lucky… or both.

The level designs feel somewhat repetitive, as if many of the levels were merely tweaked and given a few new details, and then placed in another level. Most are built with two levels, an upper and lower, with various entry points spread out through the level. Though fun, this style can become bland pretty quickly.

A fist full of pixels
Though not stellar, the graphics of this game are passable. Shoot Many Robots has a sort of comic or cartoony-style art with a country flare. It’s not going to win any awards, but it won’t make your eyes bleed, either.

The scenery is mostly filled with stereotypical southern staples, like pick-up trucks and farms, and drifts between urban and rural scenes, but never leaves the visage of the Southern U.S.. It’s not exactly creative, but it fits the theme of the game.

Country road, take me home
The soundtrack is a mix of country twang and rock ‘n’ roll that works pretty well. After gaining an item, the speakers erupt with a victorious guitar solo, and between fights, mellow rock drifts over the scenery. For the most part, the soundtrack stays within a range of genres and songs that one would probably hear while driving through the American South; although it’s not exactly the ‘greatest hits’ mix.

Team robo-killers
This game is one which really has to be played with friends. For the first level or two, the player can probably survive alone, but eventually the swarms of robots are just too many.  If you plan on playing this game, make sure to bring along a friend or two. 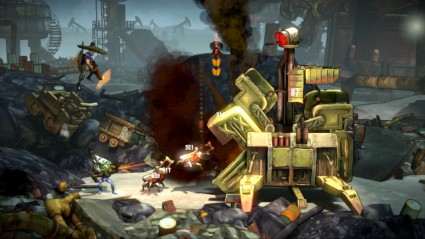 The game is both competitive and cooperative. The team works together to get all the robots and prizes, but the game also tracks how many robots each person kills, and how many nuts each person collects. It tallies up the winners at the end of each level.

Multiplayer is the saving grace of this game. It’s a pretty mediocre game, otherwise; looks alright, sounds alright, and plays okay. Throw multiplayer in, and it’s a lot more fun.

Time to wrap it up, y’all
This game isn’t really bad so much as it just isn’t good. Shoot Many Robots fails to impress, standing squarely in the mediocre category of games. It can be fun, sure, but there are definitely better multiplayer games out there. If you’re dying for a new game to pass the time with friends, and you enjoy the tongue-in-cheek, redneck American humor, then you’ll probably enjoy this game.

It’s not remarkable, but it’s acceptable. Shoot Many Robots, if nothing else, may at least make you laugh.