The world of Syndicate isn’t new, but upon playing Starbreeze’s re-imagining of the series, it may as well be. Thrust into the role of an agent protecting the interests of global leader, Eurocorp, you face a world that has long resisted war, yet failed to escape its anarchistic clutches.

Moving away from the RTS origins of the series, Starbreeze have gone for a whole new approach with Syndicate, now fifteen years since the series first debuted.

Is it the right one?

In 2069, the world has been split apart. Territories are now controlled by Syndicates, and with government now abolished, the only constant left is the desire for supremacy. So, the world’s capital is now made up of war, with consumers caught up in the middle. These consumers rely on the technology created by the syndicates, and the neural chips they supply which allow them to perform day to day duties in this digital realm.

In Syndicate, you are cast as Miles Kilo, an agent of Eurocorp, embedded with a revolutionary new chip known as Dart 6. Dart 6 is largely untested outside of combat simulations, yet Miles’s progress has been observed by higher powers, and they feel he shows a lot of promise.

However, Eurocorp’s hand is forced when they feel their interests are being betrayed. A rival syndicate, Aspari, are working on very similar technology to Dart 6, and Eurocorp suspect that there might be foul play. Thus, Miles is sent out into combat with field veteran, Jack Denham, to find an Aspari scientist known as Gary Chang, and put a stop to Aspari’s plans. What Miles doesn’t realise however, is that this conspiracy runs much deeper than mere scientific experiments. 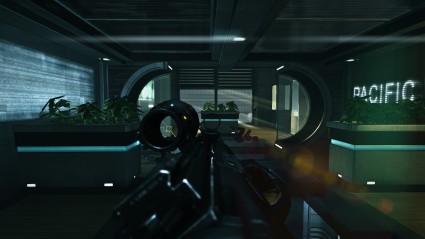 I am weapon, use me
‘Oh, another FPS, nothing new here’ you cry, but Syndicate actually challenges many of the core fundamentals associated with the genre. Much of this is due to the Dart Overlay, which is a cross-over between the Detective Vision found in the ‘Arkham’ titles from Rocksteady, and Crysis’s Nano-Vision. This serves as a kind of heat vision, but merged with Max Payne’s bullet-time. It only works for a limited time, but when activated, is a real treat.

Syndicate’s ‘level-up’ system is also quite different. Certainly, the game requires agents to level up in order to progress, but they don’t gain experience points. They collect chips from bodies and can then manually input them. Miles plunges a device into his facial orifice of choice, and uses a retracting tentacled device to pluck the chip out of their brain. Once he has the chip, he can access a pool of upgrades, with each upgrade providing Miles a 2.5% health upgrade. Unfortunately, these aren’t separated into trees and the lack of variety available does see the campaign play out mostly the same way upon multiple playthroughs.

Syndicate also features mods, which can be used in battle. Firstly, there is the Suicide Mod which causes the enemy to turn a gun on themselves and shoot. Then there’s the Persuasion Mod which turns the enemy into your accomplice, having them fight in your corner. Finally, there’s the blowback, which causes a gun to explode and forces the enemy backwards, stunning them in the process. These abilities can be used to great effect with guns, but they also wonderfully support something called Breaches.

Breaches enable you to overload turrets, deactivate shields, and bypass security with just a tap of LB. Controlling this is very natural and fluid, similar in part to the reload system in Gears of War, with the player strafing to achieve Breach Spikes (hitting the sweet spot for maximum effect). With all of these combined, Syndicate boasts a unique combat experience that feels natural, is easy to get to grips with and works well.

Unfortunately, in face of this innovation, the A.I. is overly erratic and inconsistent. When you’re badly hurt and regenerating, the enemy will stay on you as you naturally try to dart into cover, making evasive manoeuvres tricky. On the other hand, snipers will jump out of their secure positions to fight you face to face, then quickly realise their mistake, shit themselves and start backpedaling like a bat out of hell. Despite these imbalances, the game does have boss battles and ones much better than Deus Ex’s frustrating exhibitions. 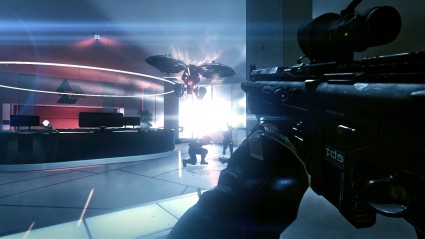 Too much damn light!

Looks like Ridley Scott
Syndicate is in a horrid place between utter beauty and complete eye-sore. Starbreeze have devised a wonderful sci-fi reality that will inspire as much as it engages. With likeness akin to Blade Runner, Shadowrun, and Tron, there’s a lot to love here.

Then there’s the contrast. A contrast that is completely and utterly blinding, forcing you to either avert your eyes or wear sunglasses while playing. Sure, we’ve all had those knee-jerk reactions of shielding eyes from the TV, like the moment you first break out into the daylight in Fallout. Those moments have impact and purpose. However, Syndicate just plays the attention-seeking card way too hard. Even adjusting the settings or alternating between Television sets doesn’t change this, unfortunately making the game disorienting and overly flamboyant.

Reeepo bwop bop
Skillrex only make an appearance in the trailer, however the rest of the score is still pretty heavy and techno funk. There’s a real mix of fast and slow beat efforts, that sweep along effortlessly in the background and fit the game perfectly.

Equally, with a pulse-pounding soundtrack, comes compelling voice-acting from Hollywood talent like Brian Cox and Rosario Dawson. Syndicate sports high production values and the whole experience seems smart and polished from beginning to end, never cheapening itself or wearing itself thin with poor, half-hearted efforts. 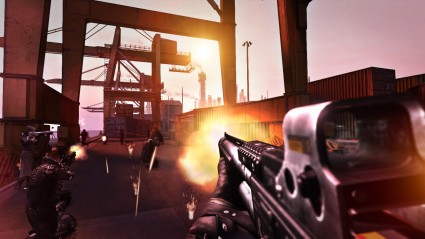 Co-op is the real focus of Syndicate...

Collaborative destruction
It’s the multiplayer in Syndicate, however, that really brings the best out of the whole package. Up to a team of four can go head to head against A.I. forces, with a series of mission objectives for them to follow. These vary from area to area, and there are over eight map choices for you to wade through. You can alternate the difficulty on these, and each player is graded on their performance.

Much like the co-op demo from a few weeks ago, you’ll realise that healing and working together will equal success. Whereas going in gung-ho or sitting back, is liable to get you wiped clean.

Trying this with less than four can be a real challenge, though. It certainly creates a much more tense, co-operative scenario with both players having to watch each other’s back at all times, but its clear the mode has been designed for four players. Learning and co-operating are key to success, and if you’re not willing to do either, this won’t be a lot of fun for you.

Syndicate offers a creative multiplayer mode, definitely more than your simple team deathmatch. However, that’s not all it does right. Syndicate also allows you to research weapon types, add new abilities to your guntype, as well as create entirely new ones. You can also create syndicates (designing their emblem and name) and have friends join your syndicate. This is actually quite beneficial, as when players play together in a syndicate online, they get added bonuses.

Group Hug?
Syndicate is a bit of a lite package that is liable to be bolstered by a wealth of DLC over the coming months. What is in the package is good and entertaining, the game has a multiplayer mode that needs to be played by everyone, and the campaign is an entertaining excursion, but there definitely could and should be more.

Despite the slight niggles, however, Starbreeze have created an entertaining, must-have title that challenges much about a genre where many think they’ve seen all there is to see.

Want more information on Syndicate, a place to arrange co-op sessions or somewhere to discuss the game? Look no further than our forum thread right here