Ron Gilbert, of Monkey Island fame, has been harbouring an idea for decades. Initially it was this concept: A cave that pulls people into the recesses of their mind, where the dark thoughts reside.

The idea stayed with him while other projects took precedent for almost twenty years, until the recent collaboration with Tim Schafer’s Double Fine Productions finally took the concept and made it a reality.

Each theme has its own personality, and personality is something both Ron Gilbert and Tim Schafer are renowned for. This shines the most when your narrator, the sentient cave, is layering the action with witty observations.

Of the seven available characters, you can only take three into the fold on a single playthrough, meaning if you want to see all that The Cave has to offer, you will have to play through the game three times.

The reason stated for this odd number, was that players may like to keep a single character for each playthrough, one that resonates the most with them. Whilst the reasoning is sound, it means you will have to do two character-specific sections twice. With this being a puzzle game at heart, there really is no motivation to replay sections when you know the solution. 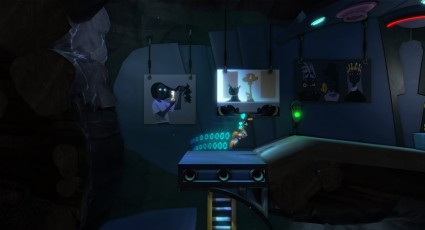 Spelunking
The game is like a classic adventure and platforming hybrid, falling short of excellence in both areas. Each of your characters has a unique special ability and these usually come in handy on their personal sections.

The knight, for example, can form a protective shield around himself, allowing him to fall from any height or withstand any attack unscathed. This is mainly useful for distracting the insta-kill enemies, as death is only a minor setback in The Cave, with the game respawning you in a puff of smoke to a nearby platform.

The platforming is functional, but very basic and underwhelming. You jump into things: ropes, chains, the edge of a platform, and your character grabs on automatically. You can drop down from the hanging position or you can climb up.

When hanging from chain-like objects you can only shimmy up or down and there is no way of combining jumping with climbing to traverse any quicker, which strangely you can do on ladders. This feels inconsistent, especially as the rope climbing animation starts off like a snail and gradually increases to match the haste of a tortoise. You can feel the G’s.

You see, there is no inventory present in this run, jump and click adventure. Instead, the items needed to solve puzzles are physically present in the world and when you pick them up, your character can be seen carrying them around. This works fine when you have access to all three of your minions, but when you reach a character-specific section they’re only usually accessible by using that character’s special ability.

When you’re locked into these sections, there is a painful amount of backtracking and with the frustrating platforming mechanics, this gets tedious very quickly. Then just when you think you’ve done all the backtracking you can handle; you climb a chain and climb it all the way to the top. You weren’t supposed to, but this is a two dimensional game, you won’t fall through the scenery and corrupt the save, causing you to start the whole game again… oh wait, it did.

The game is absolutely riddled with bugs like this.

For this review I had to play through the opening section three times because it bugged so badly that when I loaded my save the bugs were still occurring. On top of the major, potentially game-breaking bugs, there are a collection of smaller, annoying bugs for your irritation. Glitches where you fall on the spot, into eternity with the ground inches from your feet. These would be a big problem too, but luckily for you the developers knew their game was a bit messy and installed a ‘suicide button’. When you inevitably get stuck, you can kill your character and try not to repeat the same set of circumstances that caused the problem.

It’s kind of like an Ikea wardrobe, it’s good value for money, but you have to fix it yourself… 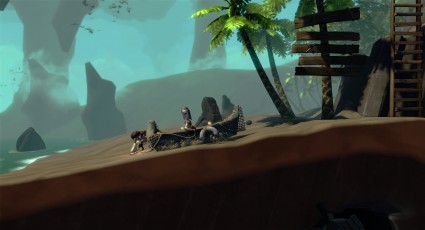 Although classy, the game does have some hefty bugs…

Look into my mind
The art direction is full of charisma and each character, although mute, oozes personality through their unique animations. The characters are all exaggerated and cartoony, lending them a pleasing visual style. Each character also visits a place personal to them during the course of the story, and inside the cave you will visit medieval castles, Victorian England estates, future museums and many more.

Each has a quirky charm and they all contrast nicely. Although the action all operates on one layer, a lot of thought has been put into the incidental details in the background, giving you some eye-candy for when your mind eventually loses interest.

On your journey, you’ll also come across various monsters who play the same animation on a loop when your characters come within range. These animations are pleasing enough, but they are entirely pre-scripted.

Aural ambience
The game’s namesake, as I mentioned previously, acts as your narrator throughout your journey. He is voiced with absolute gusto and enthusiasm (yes, the cave is a “he”) and is easily one of the highlights in a game full of lowlights. His booming voice verbalises things you wouldn’t expect a cave to be thinking and at times he’s genuinely funny, but just not as funny as he thinks he is.

Your mute characters just grunt and groan their way through the adventure, with the sounds of water dripping in an ambient rhythm forming the soundtrack to a large swathe of your journey.

Weather effects are in place for occasions like cave thunder (yes, cave thunder) as the grumble booms through your speakers and rain acts as percussion. The game only has a light use of music, but what it does display is fittingly haunting.

Caved in
There is an option for local multiplayer in the game, but unfortunately it isn’t split-screen. If one player wanders off the screen the game wrestles control away from the second player until they are both reunited into a single frame.

This gets extremely irritating on the sections where the game concentrates on a specific character and the second player can’t fully contribute without the freedom to nip off and collect quest items that are off-screen.

It’s a nice addition, but the execution comes off as a huge afterthought. 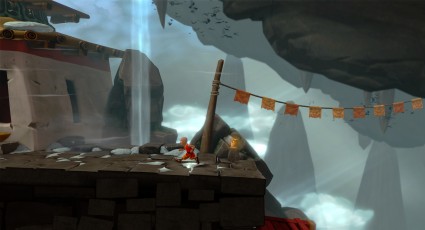 It’s not all doom and gloom, despite being in the cave…

I looked in my mind, what did I find?
The game has a few good ideas, and it’s hard not to fall in love with it for sheer charisma alone, but as a game it’s seriously flawed. Regardless of the bugs, which will hopefully be patched in time, I find it very hard to recommend this game, even to those with a fondness for old-school point and clicks.

The amount of backtracking and retreading with different characters just makes it feel that the game would have benefited massively from having an online multiplayer component.

The Cave asks you to look into your character traits and ask yourself where it would take you if you were its next victim. Currently it would probably take me to the lowest place I’ve been recently; when I was stood, positioned to kick my console into orbit out of frustration of having to restart the game for a third time.

It’s not until you’re inside of a cave that you notice how hollow they are.