I think it’s fair to say I review a real mixed bag of games. One minute, I’m embracing a rich, cyberpunk universe with Syndicate, and in the next, I’m flailing around in a Hollywood High School dance-off with VICTORiOUS. I’ve always been open-minded about trying new things since I started writing about games. Whatever a game’s background, I believe everything deserves a fair shout.

It’s with that mindset I approached Milton and Friends. Instead of closing down twisted enemy corporations and swooping through the night skies, cowl-intact, I used my stylus to feed carrots and baby bottles to a horse.

Then promptly regretted the whole thing…

You’re a trainee stalemate, and have been put in charge of a horse. Congratulations. Now it’s your job to heed the advice of experienced stalemates, as well as vets and dieticians, to ensure your horse is in immaculate, show-jumping commission. This means you have to groom your horse, feed them, pet and train them for a series of events.

Agreeing to this, I found myself stood in a stable with Stewball, ready to begin our ‘wild adventure’. 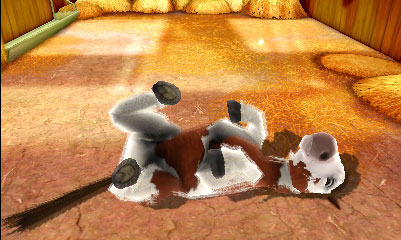 Come on Ref! That's a Foal!

Giddy-up
The majority of the game’s action is dictated via the touch-screen, with some limited Augmented Reality functionality and gyro mini-games. Essentially though, the bulk of the action features you and your stylus.

Stewball has vitality bars at the bottom of the screen which need to be fulfilled in order for him/her to give you undivided attention. Focus on one area in particular and you’ll lose favour in other areas. Keeping an even balance in Milton and Friends is essential. You’ll also be able to track your horse’s mood via a journal tracked at the bottom of the screen. Somehow, the Whitakers have uncanny insight into a horse’s inner psyche and write it all down in words we can all understand.

Controls handle well enough. Whether you’re tickling your horse under the chin, or spraying them down with a hose pipe, the stylus is always responsive and accurate. However, the game itself just lacks spark and performing each action, jumping from mini-game to mini-game just feels like a rather thankless routine

Also, the much promoted Augmented Reality functionality is, in a word, pointless. Sure, it’s cool having a virtual horse on your coffee table, but all you can do is snap 3D photos of it. That’s it. I’d have personally liked to have seen some show-jumping exhibitions, using real-life obstacles, or see the horse do a bit of exploring. Instead it remains confined to the card, and stands there looking half-asleep and clueless.

A good way to break up the feeding and grooming is to use the gyroscope in show-jumping. You tilt and twist your way around a course, but unlike the stylus, this rarely seems to be as responsive. The problem is, as show-jumping improves your ability in later areas of the game, this presents a problem with progression. When entering actual tournaments, I felt ill-prepared and unable to actually do anything, except fail.

It’s not all bad, though. Depending on the level of care you’ve given your horse, you earn Prestige Points. You earn stars based on your performance in a particular mini-game, and from this, can unlock new horse types and breeds so you can go through it all over again.

Well, if you can stomach it, that is…

Carrots or Baby Bottles?
Sadly, another area Milton and Friends fails on is the 3D. Certainly 3D is there, but it neither contributes anything to the game, nor is it particularly prominent. Sure, the horse appears to come out of the screen to lick you, or sniff around for food, but it definitely doesn’t have quite the same appeal or effect as Nintendogs.

Regardless of your choice of horse, they’re all rather cute and cuddly, but graphically, this isn’t a standout title by any means, with dull colours and last-gen graphics. 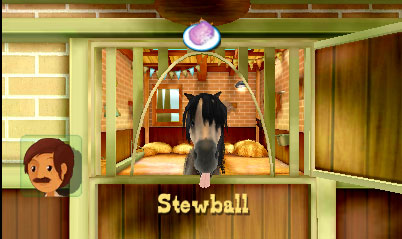 C’mere!
Another 3DS feature Milton and Friends makes limited use of is the microphone. The game lets you to call the horse over to you when in the stables, allowing your to fulfil your dreams of clicking your tongue and getting a horse to actually react to it.  Although, if you’re in a public place, and you don’t want people on the bus to look at you cock-eyed when tongue-clicking or shouting ‘COME ON STEWBALL’, there’s a simple call button you can press, which actually works a whole lot better. It also cuts embarrassment by half. Well, maybe a quarter.

The sound in-game is very much background noise, with a few whinnies and some trotting in for added effect. On the whole though, the sound quality would have even seem dated on a DSi.

That tail is so 19th century…
While there is no online functionality here, Milton and Friends does support Street Pass. One can’t say that the developers haven’t tried to accommodate all 3DS functions here. Street Pass hits allow you to compare horses in a beauty pageant, with the best horse winning awards to unlock in the game. This totally takes the ‘best in show’ concept to a whole other level. Whether it’s the right level, however, is entirely up for contention.

Worst in show
I think the fairest thing I can say about Milton and Friends is that it is a trier. It has tried to take advantage of every element of the 3DS, so you can make the most of the package. Problem being, the whole experience is very bland, and had already been bettered before the game hit store shelves. There’s not a lot of reason for me to look to this over Nintendogs, or any other game of this type, other than it has horses. In a market full of exceptional experiences and entertaining excursions, that’s no longer reason enough for anyone to consider a purchase.