There are hordes of tower defense style video-games out there. Needless to say, it’s understandable that players will often miss out on a few because of the breadth of what is on offer.

So with that in mind, it’s very brave of Colossal Games to develop a mobile video-game in this genre. Commando Jack seems to have a few interesting ideas, but is it enough to make sure that it gets some attention?

Who needs story anyway? Blow up some aliens instead!

Those pesky extraterrestrials are up to no good again in this latest action packed video-game. They have come to Earth with evil intentions and only one man can stop them. This is the basic premise that makes up the story behind Commando Jack. It’s almost like going back to a time where iconic action stars like Arnold Schwarzenegger were facing such beings.

Commando Jack successfully draws inspiration from such film material by making minimal use of story elements. Instead it relies on action packed stages to keep the player engaged. All that it matters is that it is up to the player to make sure Commando Jack doesn’t fail, or humanity gets annihilated. 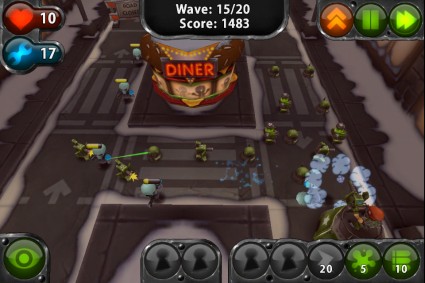 Even aliens can't resist a cheeseburger with some fries and a milkshake.

Blowing up alien scum
The basic premise in Commando Jack is to survive various enemy waves. These enemies get tougher with each wave. It’s a good way to keep players trying to get to the end. Controls are oddly responsive for a mobile device video-game, and placing weapons on the small grids is very simple. First-person view shooting mechanics effectively make use of the touch screen by ensuring one side’s purpose is for moving the aiming reticle, leaving the other side of the screen for firing.

There are various enemy types to defeat. Each one is weak to a certain type of weapon, and so it’s entertaining to try and work out the best way to defeat each enemy type. Finding out about new enemy types is another way to make sure that Commando Jack doesn’t become repetitive.

It all culminates in a fight with a massive boss. Each will take some serious skill to defeat; it will literally require every unit on the field to defeat a boss. There are various perks that will help the player even the odds, but only after they become unlocked. As a last resort, the player can also take control of Commando Jack in first person view, where he uses a machine gun to directly shoot at enemies.

In the start players only have access to basic weapon units. It is possible to buy new weapon upgrades with money earned by playing stages though, which is a good incentive to keep playing coming back for more. Defeating enemies will earn the player skill points which makes it possible to put more units on the battlefield.

The only downside is the fact that real money is also accepted. Anyone inclined to spend money can literally buy every upgrade and potentially easily finish every stage. Fortunately it’s not mandatory to use real money when buying new upgrades. It’s recommended that players just make use of the in-game money earned to get the better experience.

The tower defense genre isn’t known for being varied when it comes to design. Surprisingly enough, Commando Jack bucks this trend by including a lot of different stages. Each stage represents a different country with its unique style. The battlefield completely changes too, which means that players need to reconsider their strategies accordingly. Some of the stages are a bit too small, however. One set in Egypt barely gives the player any room to place weapons. It does give a challenge, which is fair enough, but it is still rather frustrating to play these smaller maps.

In all fairness Commando Jack has different difficulty levels. New players should start out on the easiest difficulty. It’s plausible to then move up in difficulty once more weapons become available, and the player feels confident enough to take on tougher enemy waves. Anyone that has managed to unlock every stage should think of taking on the challenging Endless mode. It’s also nice of the development to support Commando Jacob by updating it with post-launch content. 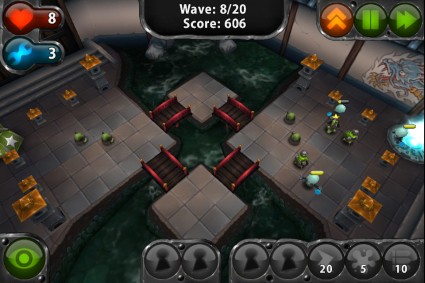 Forget Godzilla. These aliens are the latest threat to the people of Japan.

Do some sightseeing while saving the world
The visuals are nice enough  and are even on par with most other mobile video-games on the App Store. The locations for the various stages makes it possible to see different art styles, with players able to see iconic landmarks like pyramids in Egypt. It’s this attention to detail that ensures Captain Jack isn’t just another generic-looking tower defense video-game.

Each enemy has a distinct design that makes it more fun to fight against each one of them. Captain Jack himself is a typical muscle-clad hero with the attitude needed to save the world. It’s always a good sign when characters become memorable for being unique.

There are also lots of gun effects to look forward to. These aren’t exactly on the same scale of destruction as console software, but are still interesting enough for a mobile video-game. It feels like the player shouldn’t take it too seriously anyway. It’s a typical action-pumped experience that will leave players impressed with the various weapon effects.

Can aliens dance to the rhythm?
There is a lot of different music, which is unusual for this genre. Each stage has its unique music track, that you would typically associate with the country that each level represents. Strangely enough, the various music tracks sound like remixes of the main menu theme; but they fit each level so well, each of them still feels unique.

World-saving on the move
Commando Jack is the type of video-game that works really well on a mobile device. The level design will successfully keep players entertained when they need a distraction, like during work commutes. There’s even an option to continue playing any unfinished stage. Commando Jack is a successful gamble from newcomers Colossal Games, and is one alien invasion that iOS device owners will not want to miss out on.