Here we are then, after all of the hype: the next generation has arrived. Leading the march of games on Sony’s PlayStation 4 is Killzone: Shadow Fall, the latest in Guerrilla Games’ FPS series.

Killzone has always been touted as a Halo rival for PlayStation, but while I’ve never been much of a Halo fan, I have to say that up until now Killzone has generally failed to live up to the hype as well. Instead it has consistently delivered pretty, but somewhat brown, generic military shooters that didn’t quite match up to the best that FPS gaming has to offer.

Here Guerrilla Games had an opportunity to really take advantage of the huge leap in power of the PS4 – not only in terms of the graphics but also in advancing the nature of the shooter, being the only FPS out before Christmas that’s been made specifically for a next gen system. Yet while it is fair to say it has had great success with the graphics, and some success with gameplay as well, ultimately I couldn’t help coming out of the experience feeling that while this is a worthwhile FPS, I was a shade disappointed.

The first time I powered up Killzone: Shadow Fall, I must admit my jaw dropped. I’m not blessed with a mighty gaming PC, so for me the step up in graphical prowess was instantly and impressively noticeable. I wasn’t expecting the difference between PS3 and PS4 to be all that great on the graphics front to start with, and while that is true of some games, here I couldn’t have been more wrong. Vekta is gorgeous, kissed by hugely impressive lighting, a vast cityscape that stretches as far as the eye can see, and for the most part excellent character animation as well.

The only area where this is let down slightly is by recycled NPC models; they are clearly just there to add screen furniture and walk set routes that make no sense which draws you out of the experience slightly. Otherwise, however, Killzone is simply beautiful to look at throughout, and at least they have made an attempt to create a living, breathing city. 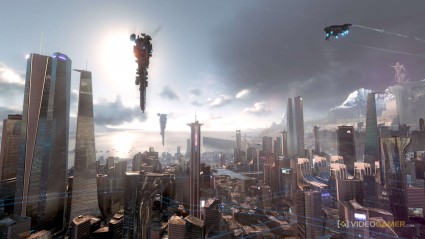 It really does look this good…

Early on, the single-player campaign does a decent job of matching this ambition too. The first real mission (the very beginning sets the scene and introduces you to some of the controls) throws you into a fairly expansive wooded region with a number of guard towers and gives you the freedom to cross it however you wish. To aid in this task, there’s a new toy to play with called the OWL. This has four modes, which are accessed by swiping the DualShock 4’s touchpad in different directions. There’s a shield, an extra attacking option, a stun move which also disables shields, and a zip-line to help you traverse the area.

Although you are still effectively funnelled through the level, it gives you enough scope to get around that it almost feels like a sandbox, especially when you’re presented with multiple objectives that can be completed in any order. I must admit it actually took me a little while to get my head around this different approach and I felt like I hadn’t really made the most of it.

This feeling increased further upon realising that after this brief early promise, what follows doesn’t give you anything like this level of freedom, relying instead on too many FPS tropes such as a turret sequence (which also happens to coincide with a large and very frustrating difficulty spike), a section where you’re stripped of all your weapons and toys, and unfortunately a good few corridors.

Criminally the OWL also becomes basically an attack or defence option for most of the remaining campaign. After that first level I found I only used the stun or zip-line functions because I was made to, either because the stun mode needed to be used to remove enemy shields, or if zip-lining was the only way to get to the next part of the level. 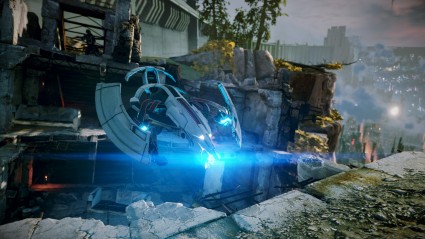 This is the OWL: cool, useful, and sadly underused. You can buy skins for it if you like, just in case spending £50 on the game itself seems a bit cheap.

It’s not all bad news after that first level though; I particularly enjoyed a level in space, which almost channelled Dead Space at times. By and large the rest of the campaign does enough to keep you going as well, with the story doing nothing hugely revelatory (I don’t recall a single moment causing me any great surprise), but being diverting enough.

The main protagonists serve the story well enough but are something of a mixed bag. Echo is the most well-realised character, although this does highlight that perhaps the rest of the cast is less effective. Sinclair in particular has motivations that are never really given context, and a story which plays out in a manner that is far from surprising. Other characters fare even less well, serving more as pantomime villains, and your character, Kellan, whilst given clear motivation, has a story arc once again that is extremely predictable. It’s fair to say there’s a lot of anger and hatred in the characters and not much else.

The campaign is a fairly lengthy one, being more generous than those in the likes of COD and Battlefield, but this is both a strength and a weakness in the circumstances. I’m glad a meaty campaign has been provided, but because Guerrilla seemed to run out of either ideas or time by the end, when that did arrive I was definitely ready to move onto something else.

This isn’t helped by a few late sections which are extremely frustrating. Not least of these is the turret section I mentioned earlier, which ends up nigh on impossible if you don’t do well enough in the early part of the siege it occurs in. I had to restart the entire section a couple of times because a checkpoint was placed at the worst possible moment meaning each time I retried it I just got killed in moments. As it turned out, really the only way to get through this section was to pick up a particular gun to keep enemy numbers down before then getting into the turret. Given the array of weapon options you’re given at this point, I can only put this down to poor design decisions and that the checkpoint really needs to be moved…

The end of the very last level is also an exercise in frustration – a stealth section that I had to do perfectly to get through but found that it was far too easy to get noticed. Since you have a number of objectives this generally meant I was dead before I could finish them. It took me several attempts just to find a way through the level that wouldn’t end in my being spotted. I must admit it caused me to utter a few words that would have upset my mother somewhat (sorry Mum!). 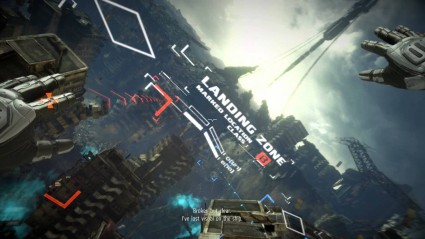 “The” freefall section. If it looks good, it really isn’t.

To cap it all off, there are a few sections where you freefall. This might’ve seemed like a good idea on paper; however, in reality it just leads to numerous sections where a mistake equals instant death and restarting the whole thing. One particular section late-on which takes you through a collapsing cityscape is particularly bad, so I just hope this never makes a re-appearance. What makes this even worse is that it comes directly after the aforementioned turret section.

Despite these frustrating moments though, overall I did enjoy the campaign and it is certainly better than any single-player Battlefield offerings. I would say it is at least on a par with most COD campaigns as well, and is easily longer than either of those tend to be.

Of course no FPS is complete nowadays without a hefty multiplayer package, and Killzone: Shadow Fall delivers pretty well here. The main crux of this section is Warzones, where you can heavily customise weaponry, perks and so on that are available, or just jump into one of the warzones already set up, of which there are already plenty of options. Matchmaking seems good and I was always able to quickly jump into a match without any trouble. Up to 24 players can take part in a round, and with the arenas tending more towards compact COD size as opposed to the large arenas of Battlefield, this is more than enough really. 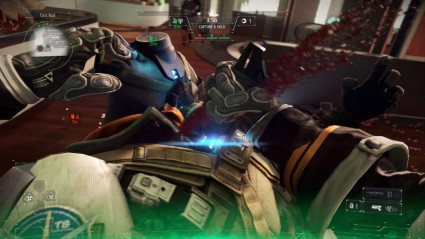 Melee kills are particularly satisfying in multiplayer, unless they happen to you of course. This happened to me a lot, but then I’m rubbish…

In terms of modes, there’s nothing hugely surprising in here really; you have deathmatches, capture the flag, and domination modes. But all are perfectly enjoyable, and the rounds that change your goal as you go through them are particularly fun, turning them into best-of-three matches. A typical example of this has you setting bombs, then protecting sites from being bombed, and finally a domination mode with three areas you need to control. Given that, as an example, you can set up a warzone where players have to be a scout and only have an invisibility cloak and a knife, the innovation here is more down to loadouts though than game modes, and there is a lot of scope here for creating some fairly crazy setups.

One large change is that there is no XP system for levelling up. Instead there are a vast number of challenges (over 1500!) which will unlock accessories for weaponry, extra perks, and more if you can complete them. These are largely fairly obtainable (I had well over 50 after just a couple of hours), although you’ll have to put in some serious time to get them all as some require literally thousands of kills.

I’m not normally a huge multiplayer FPS fan but I  had a lot of fun here, and there’s enough variety to make it enjoyable to invest time in. In fact overall it’s the multiplayer that makes Killzone: Shadow Fall a package worth investing in; more so than the single-player.

All you need is Kill(zone)

Overall Killzone: Shadow Fall does just about enough to make it worth purchasing for the PS4. In spite of the frustrating sections in the single-player, and the by-the-numbers approach to later stages, it is a fairly strong campaign, and the early sections stand up to some of the best FPS games out there. The story is also fairly interesting, although mired a little too much in cynicism and hateful characters.

Multiplayer is great fun, varied, and provides a progression structure that could keep you playing for quite some time. All of this is wrapped up in graphics that are truly next-gen, so at the very least if you’re looking for a way to show off your new PS4 then this is certainly a good option.