When I reviewed Driveclub, it was a half-decent game wrapped up in a long list of disappointing bugs and content not included due to clear problems with getting it ready for launch which, in my opinion, it still definitely was not.

Here we are now, though, a couple of months down the line, with a large number of patches in place to resolve the bugs, and with the promised dynamic weather patch in place as well. I promised once things were more stable I would write an update with my thoughts, so read on for whether Driveclub is now more worthy of your time and money…

The first thing I have to comment on is how Driveclub looks, especially with the added weather effects. It was great looking anyway, but now, it’s an absolute visual tour de force. This is quite possibly the best looking game on PS4 right now; the cars look phenomenal, almost real, and the weather effects are sublime. This perhaps shouldn’t be the most important thing about any game but it really does add to the experience, giving it an extra sheen of reality.

What of the various and many problems with the online experience? Happily, these seem to have been addressed now for the most part. The main issues I’d experienced previously were being kicked off online multiplayer (until one of the later patches, every time I played it), in-race challenges being incorrect (I’m pretty sure no car can hit 3000 miles per hour), and some pretty noticeable ghost car stuttering.

The weather effects are sensational, as good as this picture looks, they’re even better in motion

With all the aforementioned issues, the news now is positive. I’ve not been kicked off multiplayer at all in the past few weeks, I’ve only encountered one challenge that seemed completely impossible to me, a cornering challenging in the thousands where I was only managing at most about 600 points, although I’m just about willing to accept this could amount to my comparative lack of skill against the player who set it. It did seem a little too high though, so I have a lingering doubt that it should have displayed as a drift challenge. Either way, I’m no longer seeing the ridiculous average speed challenges from the early days.

Ghost cars too seem to run smoother now, so all in all, it looks as though Evolution Studios have finally delivered on their promise.

What now though? There is DLC being delivered fairly regularly, and by way of apology, much of the early content has been released for free. This has no doubt clawed back some good will, as the amount of content is quite impressive. More tracks arrived this week as well along with a new country in Japan. 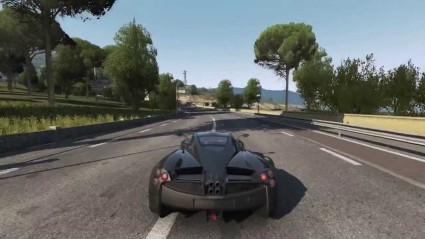 Once you get to the point of unlocking cars like this, Driveclub becomes a much greater challenge

The only lingering doubt I have about Driveclub at this point is longevity. There’s certainly no lack of content now, but for any skilled racing enthusiast it wouldn’t take all that long to blast through single player, and from that point on it lives and dies by the multiplayer. The club aspect certainly helps, as do the in-race challenges, but to keep coming back to repeat similar challenges over and over, really requires a love for the genre that I personally don’t have. Right now, I’m not sure there’s quite enough variety or content to keep me coming back for months and months, as much as I enjoy it.

Certainly don’t let that put you off though, especially if you are a big racing fan, in which case Driveclub now comes highly recommended.

The only black mark still in the Evolution copybook is the ongoing lack of the PS Plus edition. This was meant to come out on release, but we’re now so far down the line, and with so little news, that we’re almost at a point where we have to question if it will still happen. That would be quite damaging to both Evolution and Sony though after so many promises, so I can’t see that it will be dropped. It’s high time some form of release estimate at least was given, although with the next batch of PS Plus titles to be announced this week, you never know…