Mass Effect is an interesting franchise. The first was a classic Bioware-style RPG, with a rich backstory and focus on exploration. The second game focused more on combat and fighting and, for many, it did wonders for the franchise.

It makes sense that the third game does the same, considering what it’s all about.

The Mass Effect 3 demo kicks off right at the start of the game, so anyone that hasn’t played through the second game should probably look away now. Those pesky Reapers are on the move and their first holiday destination is planet Earth. Obviously London isn’t even ready for the 2012 Olympics, let alone a reaper invasion, so it’s one of the first cities to fall.

As it’s only a demo, it would make sense that user-created characters are not compatible with it, so Bioware made it possible to use a default male or female Shepard. Not only that but there’s also the option to change several physical characteristics of the character. It’s definitely the right move to add this feature in the demo, so anyone somehow new to the franchise can get to see just how extensive the character customisation is.

Another new idea featured in the demo is the ability to choose how to play the game. It’s not just about how difficult the game is anymore, every individual likes to play games in a different manner and that is why Mass Effect 3 will cater for them all. It’s now possible to, for example, to pick an option that will focus purely on storyline. It’s bound to end up luring in a few new fans, due to the fact that they can just experience what that they enjoy. 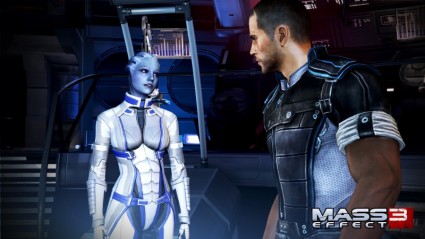 Liara is probably taking on the role of femme fatale in the third game.

The first level aims to familiarise players with new elements but it does it ever so subtly, to a degree that it’s not even really noticeable. Although the opening is very linear, it provides players with fantastic views of the reaper invasion in Vancouver.

After a swift escape and a touching moment, it’s time for Shepard to round-up the intergalactic troops. The second section of the demo takes place in the Salarian homeworld, where the ever charismatic Wrex is trying to get his Krogan females back. Besides producing one of the funniest ever Mass Effect conversations, this section is also where players are able to further familiarise with new combat mechanics. That feisty Liara is back too and she and Garrus accompany Shepard on this mission.

Anyone familiar with Mass Effect games should know the drill by now. The section pretty much consists of clearing each room out until you get to the objective. What’s interesting is that enemies in this level can deploy turrets, and those that rush through might find themselves being killed by one of them. It’s all about strategy with plenty of opportunities to flank the enemy and other tactics used in combat. 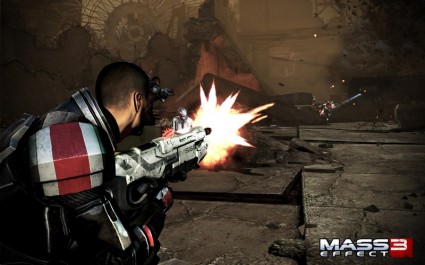 The real question is: Is Mass Effect 3 is truly better with Kinect? The simple answer is yes, but it’s best to explain why.

Kinect integration in Mass Effect 3 fortunately doesn’t mean you have to get up and start doing movements like you’re participating in a yoga class: It’s only necessary for players to use voice commands. These work extremely well when in the heat of battle. Ask Garrus to use a concussive shot and he will promptly do it. Tell Shepard to switch to the shotgun and it’s done without the least hint of a slowdown.

Read one of the dialogue options out loud and it will automatically be picked. This might sound strange but the use of voice commands really makes for a different experience. It makes the game move on at a steadier pace, due to the fact that it’s not necessary to constantly pause it to exchange weapons or use biotic powers. Anyone with a Kinect sensor will certainly be making good use of this feature.

Visually Mass Effect 3 is impressive, but it doesn’t seem to have been vastly improved when compared to the previous game. It’s not bad, though, as Mass Effect 2 is still one of the best visual experiences when it comes to modern gaming. However, it shows just how far the Bioware team has come when it isn’t possible to enhance the game significantly on current generation hardware.

Something that Mass Effect veterans might find shocking is just how difficult Insanity Mode is in this game. No longer will the old ‘hide in cover’ trick work as enemies will actively seek the main character. Health does not automatically replenish and it’s necessary to use health kits. The shield does regenerate but will go down with just a few hits. Enemies themselves are experts at evading fire when it comes to tagging them too. This might sound like a nightmare, but it’s exactly the kind of challenge that players have asked for.

This Mass Effect 3 demo is just the right length to get fans salivating, and hopefully it’ll rope in a few newcomers too. Enabling Kinect commands seems to work well, and will surely prove to doubters that Bioware were right to implement them. All the small changes make it possible to see just how far the game has come, in terms of the advanced A.I. and all the other features that will hopefully make Mass Effect 3 an enjoyable game.

March can’t come soon enough, but for now there’s no better way to wait than to experience this demo.