It’s been a pretty short summer for us football fans. On the back of the European club season and an exciting (all be it horrible) end to the Premier League, we’ve had one of the best European Championships in recent memory. Deservedly won, of course, by one of the best teams ever. Now, after a very short break the Olympic football tournament is in full swing with a few surprises already, and a close look at some of the world’s most exciting young players.

With only two weeks to go until the start of the English football league season, Konami have decided to add to the overload and give us what has to be considered a very early look at this autumn’s PES 2013, with the demo now available on XBLA, PS3 and PC. Never one to miss out on a bit of football, I’ve been spending the past week dissecting what’s good and not so good at this early stage.

First things first, the front-end presentation and overall visual appearance at this stage follow on very much from last year’s game, with the usual tweak here and there to smooth the edges, as it were. Players are a fraction more detailed, but it is only a fraction; and although they look impressive close up, when picking an International team and watching the pre-game animations it’s pretty poor to see that no effort has been made to lip synch any singing of national anthems. It may seem like a small, insignificant note, but Konami would have been better off taking their lead from England and just keeping the mouths shut.

Speaking of the anthems, they are played in superb style before those international games, and are a sign of a definite upgrade in the audio (until we hear the commentary in a later version). The crowd (an area that I personally have always felt PES has done relatively well with), sounds crisper and louder than ever, and follows the play pretty well. 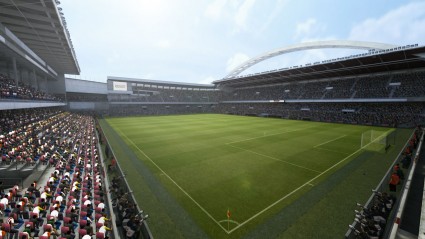 All that’s par for the course really, as we know it’s what happens on the pitch that matters. Although it is clearly an early demo, the player movement is more fluid than ever before. This is most noticeable when on the attack, as the AI players on your team move intelligently off the ball and actually create space for the man on the ball, allowing you to build some good solid play in possession. This is before you factor in the return of the second man control that debuted so well last time out, and which already feels a little more comfortable this time around.

The fact your team mates move so intelligently for you off the ball is what has really drawn me into this demo. It makes the game much easier to play when you regularly have someone to pass to. Don’t mis-interpret this for a drop in difficulty though, as the opponent AI has also had an upgrade. On the higher difficulty levels, getting the ball back is harder than ever before. AI teams now pop the ball around superbly well, with passing crisper and sharper, and that added off-the-ball movement. 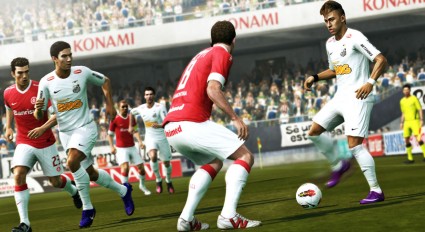 The most famous haircut in football, lovingly recreated

In addition to this, the computer-controlled teams pick their passes more intelligently, use their feints in more dangerous areas and genuinely make you think about how you’re going to counter their play so defensively, you’ll need to take a leaf out of Barcelona’s book and hunt in packs.

The pace of the game is akin to the modern game. When on the attack, you are aware that if you overload too much you might be open to the counter, and similarly know when defending, if you pick the passes right you could be in on goal in no time at all. This all adds to a PES 2013 feeling considerably slicker than last year’s game already.

However, we must point out that despite the strides made in the past couple of years, arguably the biggest question that faces every PES release now is how the online modes will hold up. This demo steers clear of that question. In addition, with the recent announcements of the improvements made to FIFA’s career mode, Konami’s title will be under more pressure than ever to deliver a slick, smooth game of footy. This demo shows us it’s at least on the right path.