The Red Faction series has moved on quite a bit since its 2001 debut as a FPS. Back then the game was as much about the GeoMod Technology as the actual gameplay itself, although it did receive some good reviews and is unquestionably something of a cult classic. It is perhaps a little strange then that there have only been a couple of sequels in the ten years since that debut back on PS2… Until now.

Red Faction Armageddon is the fourth (fifth if you include the failed B.E.A.S.T) title in the series and will be hitting our stores in early June. It takes place some fifty years after the events of Guerilla and like that title is played as a third person shooter. I have spent some time with the demo, currently available on Xbox Live Marketplace, to see what we can expect from our next trip to Mars.

The demo opens with your character, Mason, being grilled by what can only be described as an angry mob. It seems that they are holding you accountable for releasing some rather nasty creatures where you were doing a bit of mining. Rather than hang around and get a kicking, your character wisely decides to cut his losses and do one, ending up in the underground tunnels that have become the home of the colonists.

It just so happens that the particular tunnel you find yourself in for the demo is the sewer and it is up to you to find a route out. What follows is something of a training level that sees you battle a selection of aliens and get a feel for some of the weapons on offer in the final game.

You can hold four weapons in total and selecting one is a simple case of pressing up, down, left or right on the d-pad. You begin with one of the new weapons for Armageddon; the Charge Launcher. This is kind of a grenade launcher that fires sticky grenades, which have to be manually detonated with the X button. On the plus side, the weapon is pretty powerful with a good kill zone meaning the accuracy-challenged, like myself, still have a good chance. On the downside, the firing range isn’t the greatest and the fire rate is quite slow. You can also only hold twelve charges but even so it is clear to see on this level that it’s a good tool and the destructive power will make it a solid choice come the final game. That’s because, as ever, blowing up the world around you is clearly going to be a big part of the gameplay. 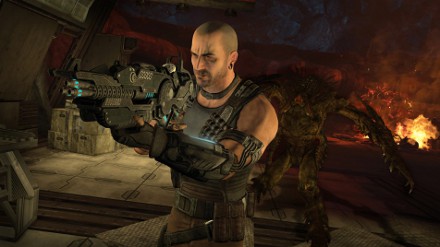 This is shown immediately, as your first task is to find a way past some fallen debris by firing a charge with RT, then hitting the X button to detonate to clear your path. You then get your hands on weapon number two of the demo; the Magnet Gun. This is described as a Salvaging Device and fires in two parts. The first press of the trigger sets out an anchor and the second works as an attractor. As a weapon, on this level, it seems pretty useless doing next to no damage while being very slow to fire, so we’ll have to wait and see how it fares later.

You then need to use your repair function to rebuild a bridge, which leads you into your first alien encounter. The enemies come in a few forms in this demo and cover big and slow to quick and small with the standard foot soldiers in between.

You will then quickly pick up a third weapon; the Singularity Cannon, which is basically your smart bomb. This fires a black hole that will engulf everything in its path, including you, so no getting trigger happy with this one equipped. Again it doesn’t have the quickest of fire rates but when a single shot can literally clear a screen of alien scum who needs rapid fire? 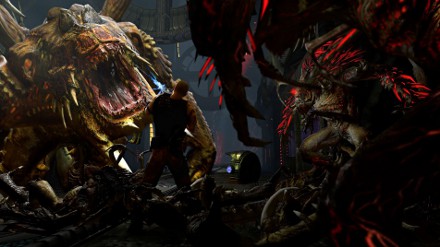 As you turn the corner you get a quick look at the power-up mechanism of Red Faction: Armageddon; an upgrade station. Upgrades are purchased with salvage and include your standard health increase, quicker reload time, increased fire accuracy, enemy indicator, evasion level up (which makes it harder to get hit), and a Shockwave, which freezes all enemies on-screen by holding down the RB button.

Another of the new features showcased in the demo is the Nano Forge which allows you to use a Kinetic energy to destroy objects or baddies in front of you. It is used with a tap of the RB and is basically a shoulder charge action that flattens anything in your path. Think of it as Wayne Rooney in a bad mood.

The fourth and final weapon showcased in the demo is the standard assault rifle. Rapid Fire, reasonable range, low damage but every good soldier needs one and our Mason is no different. Having picked this up, the demo gives you a glimpse of what running battles might be like in the final game by giving you a standoff with multiple aliens. As briefly mentioned earlier there is a good mix in the abilities of your enemies and you will need to master switching weapons quickly throughout a gunfight. 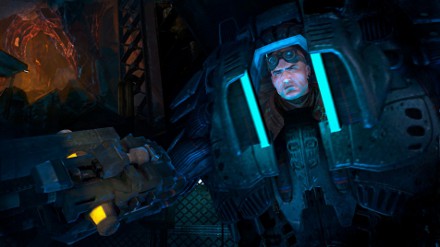 After a quick wander through some caves and another influx of aliens to take out, you will get your hands on an exoskeleton suit which has two weapons attached. The Mini-gun and the Rocket both have infinite ammo and the suit gives you some added protection from attacks but you wont be able to visit an upgrade station whilst you are in it. The demo then ends with a pretty epic shootout through a market.

Graphically I have to admit Red Faction: Armageddon looks pretty impressive. The final Market area of the demo has explosions going on all over the place with structures literally crashing down around you and there are no apparent issues with frame rate or screen tear. There are some really nice graphical touches too, like steam coming from Mason’s mouth as he breathes in the cold atmosphere. Likewise the sound is shaping up with some impressive explosions, decent voice acting and some nice alien screams to set the heart rate going a touch quicker.

Although it is a very short demo, Red Faction: Armageddon does the job of whetting the appetite for what looks like being a good solid shooter come June. With some impressive visuals and some nicely varied weapons, it’s safe to say this is now well and truly on my radar.