It is safe to say that when I look back over my formative years and my gaming life as a whole, a certain spiky, blue hedgehog is somewhere close to the top of the list of iconic characters and classic games. The original Sonic the Hedgehog on the Sega Megadrive is still one of my favourite titles ever and I was very quick to download the XBLA version a few years back when Sega made it available over the marketplace.

Since then, it is fair to say that the series has had a few ups and downs, but in my opinion the Nintendo exclusive, Sonic Colours, released just before Christmas 2010 was a real return to form for the series. This year, the speedy hedgehog celebrates his twentieth anniversary and to celebrate, Sega will release Sonic Generations across multiple platforms. I’ve been spending some time with the recently released Demo to see what we can expect come November.

First things first this demo is available for a limited time only so if you want to give it a go yourselves go and download it, NOW.

The demo consists of one level only and that is the Green Hill Zone. You will immediately get a sense of familiarity as the design of the level is very much as it was back in 1991 with the major difference being the added depth to the backgrounds. The other noticeable graphical change is the more mechanical look of the baddies. In the original the robotic creatures had a much more curvaceous style and moved in a smoother motion than they do in this demo and the weapons they fire are a bit more advanced too, which I personally believe adds a bit to the game. As an example the Crabs fire missiles rather than pixelated balls.

As always with Sonic the levels have more than a single route through and locating some of the more difficult to reach platforms is both challenging and enjoyable in equal measure. The Green Hill Zone certainly seems to be a bit bigger this time round and in the demo at least the secrets I remember from the original are not in place. Naturally, should you wish you can fire our hero through the level in around 90 seconds or so but as this is the only level you can explore in the demo I have tried to take my time as much as possible and explore the environment. 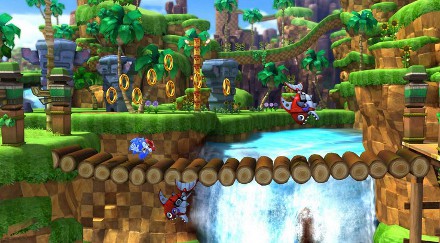 Spot the difference from 1991

Sonic himself doesn’t look as though he’s aged at all in the past twenty years as he sprints, jumps and spins his way around the environment. He does have one key new animation and perhaps it is a sign of his age but when hit, Sonic gets dumped on his backside. This means that he takes a bit longer than we have come to expect getting back up and grabbing one of those dropped rings is a little tougher. The controls are the same as ever with a spin dash performed by pressing X when standing still and you’ll be perfectly happy spin-jumping with A to attack the baddies in the same way you have done for years. Those baddies are themselves the same as the original in this Demo level with the exception of the previously mentioned extra mechanics.

Unfortunately that really is all you get in the demo. It is without question the shortest demo I have ever seen on Xbox and it does next to nothing to trigger any excitement for the final release. There is no special zone to test, you only get to play as “Classic Sonic” and you only see one relatively short level. In fact, Sega might have been better holding this back altogether as fans of the series would continue to talk the title up themselves. You don’t even get the usual Demo package of five minutes video of what to expect when the final game comes round.

All you do get is a very short piece of footage of the same level with the advice that you can play the full game as Classic Sonic or Modern Sonic, which will amount to playing the level in 2D with the simplistic old moves of run, jump and spin or in 3D with the added slide and lock on attacks we have seen in Colours and Unleashed. 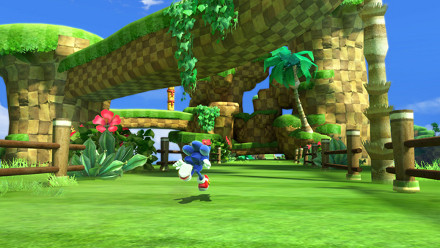 You wont see this in the demo

Overall I would have to say I’m hugely disappointed with what I’ve seen here. Naturally you can never really tell what a game will be like at release from one of these demos but it would have been nice to maybe see an extra level, get to play the same level as both versions of our hero or at least seen in the video footage what some of the other levels will look like.

As a fan of the series I will still keep one eye on this as it nears its November release but there is literally nothing in the demo to get you excited.