Golden Joystick Awards 2011 from the perspective of a beginner

It’s funny that I found myself attending the Golden Joystick awards this year for This is My Joystick, as I can’t remember much about previous years. When it comes to the big consumer shows like E3 and Gamescom, I would get excited because of all the new revelations, however, award shows just didn’t seem to do it for me as I couldn’t watch a live feed and it always felt too predictive.

This year, though, I was actually going to watch a games awards show in person, which meant that I was pretty excited. At the same time I had never experienced the delights of managing a live text feed before, so the pressure was on. From what I have read, the Golden joystick awards have been around for a long time. Each year has seen it become even better and this year promised to overshadow the last one, with lots of votes and quality video-games going up against each other in their respective categories.

The awards ceremony kicked off with comedian Seann Walsh coming on stage to entertain the audience. Seann spent a considerable amount of time on stage cracking jokes about his gaming pet hates. At a point he even seemed be trying to mimic Mortal Kombat. It was all very entertaining and the audience seemed to honestly enjoy it as everyone was laughing. 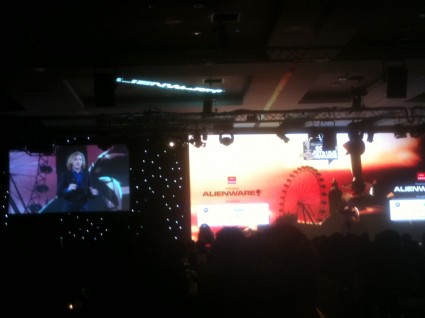 Shortly after the awards started, I must admit that I have probably never seen myself attempting to type so fast in my life for our live text feed. The winners got announced rather swiftly considering the amount of categories. It probably took a good forty-five minutes before the ceremony ended. This was a surprise to someone like me who had once stayed up all night to watch the Oscars live on TV. There were a few nice surprises in between announcing the winners. These consisted of trailers that publishers, like Namco Bandai for example, had provided for games like Inversion. The trailers were exclusive to the GJA, but I couldn’t help but think that they weren’t exactly showing any new major reveals.

In terms of the awards I didn’t really feel surprised when most of the winners got announced. In fact I was more surprised at the runner ups. Since Child of Eden is one of my favourite games of the year I was very pleased to see it come third in the best music game category. A few people in the room seemed shocked that Call of Duty: Black Ops wasn’t the Ultimate Game of the Year. I have to confess that if I was guessing then I would have bet on Black Ops taking the honours, however, the point of the Golden joystick awards is that fans are the ones in charge, so maybe the industry is slowly changing and gamers are becoming less interested in the yearly blockbuster offerings. 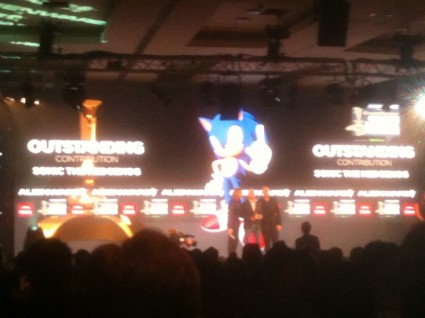 SEGA Team were pleased to come on stage for Sonic's award.

Other surprising winners included the controversial win for Fallout: New Vegas in the RPG category. Fallout 3 was a brilliant game but many felt that New Vegas didn’t offer anything new and was largely unplayable due to the various bugs. However, it was fans that voted, so there must have been some redeeming qualities that made it worthy of being the winner. Mortal Kombat winning the fighting category over the likes of Super Street Fighter IV: Arcade Edition was also a surprise. Having reviewed the game earlier in the year, I can safely say that it was well deserved.

Looking back at previous entries by other This Is My Joystick members; I couldn’t help but notice that some of the categories were missing this year. Maybe it was to make the ceremony shorter and if that was the case, then it was a successful mission.

After the ceremony ended, it was time to go back to the bloggers room for some group interviews with some of the winners. It felt a bit rushed, but then again these poor people deserved to enjoy the after-party for all their hard work. The after-party itself started out as a slow affair but quickly turned into a superb night out. It all became a blur towards the last hour or so, but if there’s one thing I know, it’s that the games industry knows how to party. This is not only a celebrations of the best games that came out in the last year but also a reward for all the hard work that often goes unnoticed. 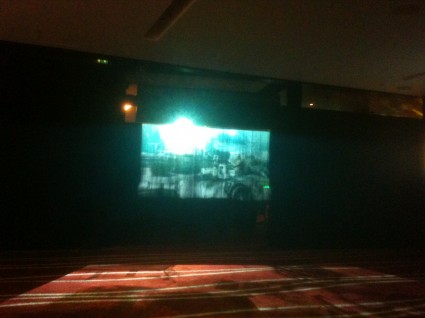 This might seem like a normal projector screen but don't be fooled. It was the entrance to the after party.

It was a unique experience for someone who had never dabbled in live text feeds before. One of my personal favourite moments was seeing Sonic The Hedgehog get the recognition that he deserved. The blue hedgehog might have gone through a rough few years, but it’s amazing that he managed to stick around for twenty years.

I would also like to say that it was also very noble of Future Publishing to not forget about online media. After all, online media is often shunned at these sort of ceremonies and it was refreshing to see Future accommodating so many people from different forms of online publications. Hopefully the live feed made it possible for fans to feel like they were a part of the Golden joystick awards, as they are one of the main reasons that this industry continues to grow.

I would like to thank the This Is My Joystick crew for giving me the opportunity to represent them at the Golden joystick awards, and everyone at Future Media and Idea Generations PR for making it possible.

Here’s to more coverage of the Golden Joystick 2012 awards next year and well done to all the winners and runner-ups from this.