One of the video-game industry’s long running jokes involves the first Crysis. Many gamers found it difficult to run Crysis, back when it came out on the PC. A few years later and Crysis 3 has just been announced. It certainly would not run on PCs from that time, but are there any striking differences when comparing it to Crysis 2?

It’s vital to start by saying that Crysis 3 will use an enhanced version of the “CryENGINE 3” engine. The development team promises it will result in even better visuals. The main character is still Prophet and the story starts twenty years after Crysis 2, in 2047. There’s a world domination plot and it’s up to Prophet to save the day. It’s the typical action plot with some sci-fi references to make it less generic.

Crysis 3 will include sandbox-style mechanics to give players the freedom to explore. The story will take Prophet to different environments, where players get to see all kinds of natural wonders. New York City has become a nanodome (Liberty Dome) and is split up into different zones, known as the Seven Wonders. This will provide situations where the player needs to constantly adapt, by employing different tactics. There isn’t any further information released at the moment regarding what players can expect from this sequel. 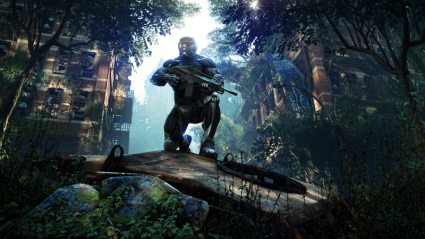 The suit is back!

The short demonstration takes place in the New York city Chinatown district. It’s been 20 years so it’s not a surprise that the city now looks like an urban rainforest. It’s fitting that the name of the level is “Hell is right around the corner”, since it really looks like Chinatown has been hit by a bomb. The first aspect that most players will notice is the HUD interface. It’s minimalist with only essential information, like an ammo and health bar, being fed back to the player. Yet it also has stylish see-through shapes, to remind players of the fact that the main character is wearing an advanced Nanosuit combat suit. This is potentially not the final version of the user interface but it’s looking promising.

One weapon stood out during the demonstration and that is the bow gun. This handy tool is used to hit enemies from a long distance. It’s an interesting idea considering the emphasis of guns in previous Crysis video-games. Regular guns also make a comeback, and it’s even possible to control alien weapons. You can really feel the kick of each weapon, when it’s being fired, just by the sound it makes. Enemies are literally ripped into shreds when using some of the weapons. It felt exciting to witness all the carnage that was going on the screen.

Fighting enemies isn’t exactly done in the same manner as in previous Crysis video-games. The sandbox level design means that enemies will not just stick to a specific area, making it similar to how a predator hunts its prey. Prophet can use cover and truly make use of the environment to stalk alien Ceph enemies, and silently take them out. He can also take advantage of higher areas to take out enemies more easily. It’s just a glimpse of what is possible when it comes to tactics. At one point, Prophet even hacked a turret, and programmed it to attack enemies, which was just a distraction to slip by. This is the sort of situation that will make it possible to play in different ways. Players are even encouraged to analyse each combat situation, rather than rushing in guns-blazing. 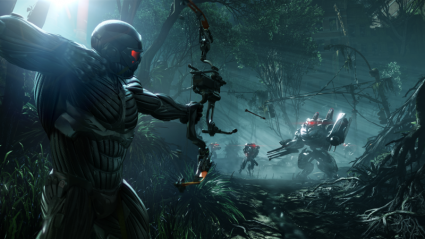 Crysis 3 doesn’t show any major improvements or differences over Crysis 2 thus far. It is a lot darker already, however; and this is not just because the demo level occurs during night-time. It’s also noticeable that the level design has seen some changes, with a lot more emphasis on uneven surfaces. It’s difficult to explain but object size also feels more realistic. The attention to finer details, such as grass blowing in the wind, proves that the team is putting their all into it. It’s a bold claim to say Crysis 3 will look even better, but it seems like Crytek is already hard at work to prove it.

This short demonstration was a fantastic way for Crytek to introduce Crysis 3 to the world. Anyone paying close attention will see many smaller details that all point to it being a promising sequel. Crysis 3 might look the same on the surface, but it should all change as each feature gets explained in detail over the next few months.