Ghost Recon is undoubtedly one of those franchises that makes any gamer worth their salt get a warm glow inside. From way back in the good old days of PS2 when the series first launched, it has produced some first class shooters that have tested boundaries and promoted team work ahead of the usual “run and gun” tactics of other titles.

One of the biggest announcements at the recent E3 show was the walkthrough of the next instalment in the series, Ghost Recon: Future Soldier, which is due for release early 2012. Last week, Ubisoft allowed members of the press to play through the demo themselves and let me tell you, the Future looks good.

For those of you that have not seen the video, the level is set in Nigeria and shows off not just the tactical elements of the game we have come to know and love, but it also displays a good amount of variety that is likely to keep fans of the series and newcomers alike happy. Offering up to four player co-op, the emphasis certainly appears to be on teamwork but if this level is anything to go by there will be plenty of opportunities to go in “all guns blazing” too.

The level played involves you extracting a V.I.P. from a secure location and starts with our team of four (Kozak, Ghost Lead, Pepper and 30K) entering a village via some less than clear water. As you approach there are four mercs standing across a small wooden platform. This sets up the first example of team work as each of you can lock on to a specific target. When set, a quick “ready” command and all four of you fire, taking down the targets in unison. There is a simple visual aid on-screen to tell you when each member of your team is set, which will help in the final version for those that play online without a headset or simply when gaming with players of a different nationality.

From here it’s on to a team breach, again there is a nice visual marker advising each team member where to stand. A simple tap of the A button marks you ready and when everyone is set, another press of A triggers the breach. Once you’re through the door, three of you take out enemies and the fourth uses a little persuasive talking to get info on your target. While the three shooters play their role, if you are the questioner, your part is computer controlled once you are in the room. This kind of seamless switching between some of the scripted scenes appears again at the end of the level and it allows the game to flow beautifully. 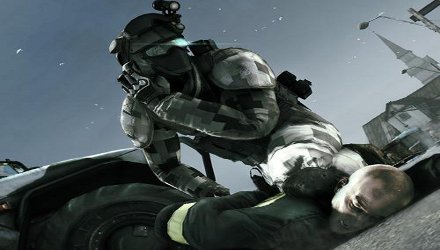 From here, you then head through the township in search of the target. This is the first part of the demo that opens up the idea that you can choose how you work. You can split the team up here, either two by two or one lone gunner taking a slightly different route on their own, for example. Alternatively you can choose to synchronise your shots on the Soldiers littered around the town (generally beating up the locals) or just simply take a shoot on sight approach.

Throughout this section the Augmented Reality really kicks in for the first time and is separated into two parts. “WAR” is Weapon based, and “ATLAS” gives you the details relating to the environment. This will include things like waypoints; pointers of the direction you need to take and, far more importantly, target locations.

As you move beyond the town you arrive at what looks like a checkpoint. Again you can split up or stick together, take your time or rush in. One of the key components of the AR system is that if one of your team heads off and locates some enemies they will all be marked in the AR system for all of you. You can mark specific targets that you see but are out of your line of fire and highlight them for a colleague better placed, sharing the Intel around the team.

As you clear this area, you reach the second breach point of the level, a container holding your captured V.I.P. The team then have to get this man to safety, done by flanking him in a diamond formation. Each of you will need to be on the ball as you make your way out of the area taking down a chopper along the way. This part sees the four of you continuing to flank the V.I.P and work your way behind buildings and crates as you take some pretty heavy fire. The more the bullets rain down on you, the harder it gets to focus. A very brief look at the effect of suppressive fire that we are promised in the final release.

Visually, Ghost Recon: Future Soldier is already looking pretty special. Some of the detail in the demo is simply incredible, the Augmented Reality seamlessly links into the environment and villagers literally run for their lives in something of a blind panic as you head through the area firing automatic weapons. 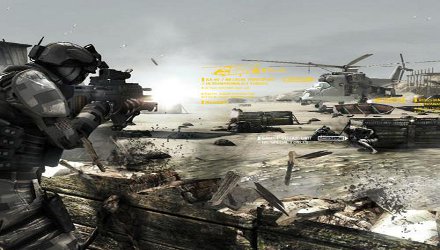 We were given some fairly tasty headphones to get a feel for the sound of the game and I have to say even at this stage GR:FS is up there with the very best in terms of audio. When the bullets start to fly you almost start to duck in your seat to avoid getting hit. Villagers scream with fear and explosions reverberate for a fair few seconds after detonation.

As with everything of late, a new Xbox 360 title wouldn’t be complete without some Kinect support and this is no different. It didn’t come till later in the day and I wasn’t able to get a feel for it myself, but the Kinect support comes in the form of GunSmith. This allows the player to seamlessly tweak their weapons. Sweeping your hands apart dismantles your firearm allowing you to put different component parts together, effectively  making completely unique weapons. You can then take your created weapon on to a virtual firing range to test it out.

Although GunSmith will work with a standard pad for those of us not yet on the Kinect bandwagon, I can’t help but think it will seriously lose some of its edge without the kinect immersion.

Front to back, the demo lasted around ten minutes and I can honestly say I was drawn right in and pretty much lost all concept of time or where I was while playing. If this is what we can come to expect next March then I think it’s safe to say we may have an early contender for game of the year!