Hands On: Saints Row: The Third

There was a time, many moons ago when Grand Theft Auto stood alone, without peers, as the sandbox title. It gave us glorified violence and gang warfare in a relaxed, fun manner with some really clever side missions that not only set the heart racing but brought a smile to the face.

Skip to the current generation of consoles and there was a short delay from Rockstar as they worked to give their series a more gritty, realistic feel for the modern era, leaving something of a hole in the market. This hole was rather conveniently filled by Saints Row, courtesy of Volition.

Saints Row carried on the tradition of presenting a fun-filled and action packed sandbox title with a slightly cartoony feel, and despite some graphical imperfections it proved to be something of a hit. Roll the clock forward five years and we are about to receive the third instalment, which promises to be a touch more polished and as much fun as ever.

At the recent Eurogamer Expo, Saints Row the Third was something of a big draw, and that’s not just because of the promotional girls walking round the show floor either. Saints Row has built up a pretty big following since it debuted on Xbox 360 back in 2006 and as a big fan I was quick to get in line.

Unfortunately, the console I used had no headphones, so I couldn’t follow the dialogue as the game opened into the initial level; “When Good Heists Go Bad”. I was, however, able to get a good idea of the gameplay and the visuals on offer.

This level sees you perform a bank job with three homies, rather surprisingly dressed as… yourself. You start off on the ground floor of the bank, with the customers following the typical orders of getting down. As you move to the counter, things take a turn for the worse as it seems the staff were expecting you.

It’s not long before the bullets start flying as you and your crew are faced with bank security guards and SWAT as you start looking for what, I assume, was the bank manager. Fortunately, you have unlimited ammo on a good variety of weapons; a pistol, rifle, machine gun and shotgun to make this possible. 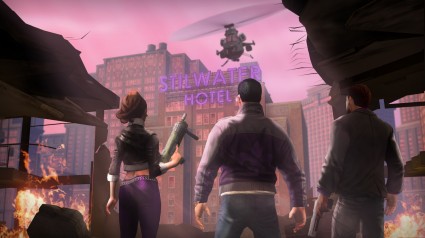 Get ready to blow stuff up!

Targeting and shooting feels very familiar as you go into an over the shoulder view for combat. LT aims and RT fires, and you can bring up your weapons wheel as before to easily select any of the available firearms. Unfortunately, it seems that cover may be lacking again, which is a shame but overall it’s familiar and works ok.

You continue through the bank and upstairs, taking on more and more security and ducking behind tables as you locate the bank manager. You then have to detonate some explosive to blow the roof. Yes, you read that right: The plan is to airlift the vault out of the bank. Despite all the setbacks, everything appears to be going, more or less to plan. That is until you get to the roof and find a number of choppers, police and FBI gunning for you.

What follows is an insane shootout, as you bring down the choppers and mow down wave upon wave of SWAT team members, before managing to get the vault hooked up to the escape chopper, getting yourself on top of it and making your exit. Explosions and bullets rain down on you as you jump from side to side on top of the vault, continuing to shoot back at the FBI and Police, which is ultimately in vain, as you end up getting captured and the mission ends.

In a separate session of free roam, I took some of the cars for a spin round the city, completely legally of course, and can confirm the game keeps that arcade feel of the past games in these sections. Vehicles allow you to fling yourself around corners at great pace in a familiar fashion that the series has become known for. 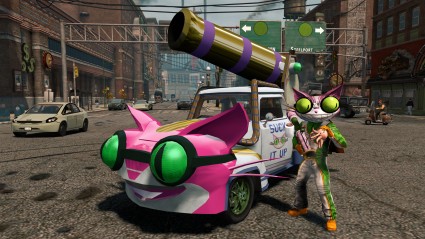 Safe to say this episode will be just as mad as the others!

I also went for a quick jog with a giant green monster head on (courtesy of someone else) and the player animations seemed to be a bit smoother and more fluid than the previous titles.

With the short time I had with Saints Row the Third, it felt very similar to its predecessors, which for me, is no bad thing. The game carries a looks similar to those games too, but there certainly is some extra polish to the visuals. Gone are the glaring glitches where cars drop through road and bridges disappear as you drive across them.

I was gutted I couldn’t really hear the sound, as in the previous titles the speech has been one of the real highlights, offering some genuine humour that really adds to the experience. Alas this part will have to wait.

I didn’t get to play for too long but the demo has certainly done its job for me, as I am now even more eager than ever to get my hands on the third instalment of this thoroughly enjoyable series. Eyes on November 18th, then!