It’s strange to go back a few years and see how dead the fighting game genre had gotten. Then the Street Fighter IV came out and it possibly single-handedly revived everybody’s interest in the forgotten, noble brawler. With that success, followed various other high-profile sequels for well-known fighting games; Tekken, Soul Calibur, Marvel vs Capcom, King of Fighters, and even new games entertained, such as the superb Blazblue. The next fighting game on the release schedule is Skullgirls.

Skullgirls is set in a world where everyone is after a powerful artefact called the Skull Heart. An artefact that can grant wishes….

In Skullgirls, it’s possible to pick either one powerful character, two strong characters or three normal characters before a fight. Unlike MvC, it’s not necessary for both players to pick the same number of characters. Anyone that picks just one fighter will get a more resistant character, but then you obviously lose the ability to switch between characters and do support attacks. Picking more than one character makes it possible to regenerate health by switching characters, but it’s a trade off as they aren’t as powerful.

This is an efficient and balanced way of making sure that there are advantages to picking each of the options. In fact, this system manages to successfully bring together two very distinct fighting games. It’s not an easy feat but Skullgirls can either be played as a traditional 1v1 fighting game, something more unique with Marvel vs Capcom styled group fights, or even a mash-up of both fighting styles. 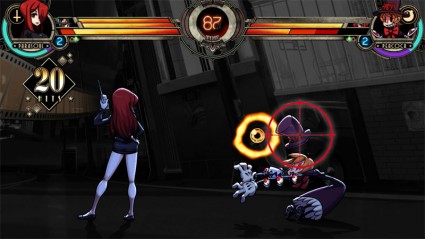 Anyone that picks more than one character can choose an assist move for each of them. What is different, though, is that it’s possible to set custom moves. So players can either pick a pre-set assist move or select their own. Choosing the wrong custom assist move is not helpful, but experienced gamers will certainly make good use of it.

Those that have been victims of a fighting game spammer know too well how powerless it feels when being repeatedly hit with a specific move, such as a cannon laser. It’s spammers that get punished in Skullgirls because of the way that the game works. Anyone that attempts to constantly pull off cheap moves is in for a surprise. The game allows the other player to break the combo if a player is repeatedly pulling off the same move over and over.

One of the main attractions in the game is the combos, and after playing it, I’m fascinated by the possibilities offered. It’s possible to link various fighting moves as is usually the case, and the game even gives the ability to juggle characters in the air. What it also offers, though, is the ability to integrate special/super moves into combos. Assist moves can also be used to continue the combo. During one fight a character used an assist move, which made it possible for another character to hit opponent from behind. It’s all about timing, and skilled players will be able to pull off some incredible combos with the right skills and some imagination.

It ‘s safe to say that blocking is a vital part of any fighting game. In Skullgirls blocking is used to push back opponents. This will only work if blocking with the right timing and against the correct move. Not only that, but blocking will also work on assist moves.

Throws are obviously part of the gameplay and it’s possible to grab characters on ground and in the air. Nothing happens if both characters try to grab at the same time.

The special/super attacks are fun to watch and each one revolves around the specific concept for the character that does them. One of Peacock’s special moves, for example, will drop random objects (like a piano) and even animals on other characters. Her super consists of shoving the other character inside a bag and getting her gang to kick it.. These moves can also be linked together when using more than one character in a battle. 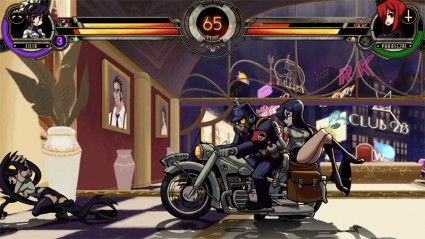 All is fair game in Skullgirls. Even using a motorcycle.

All characters revealed so far are girls which conforms with the game’s title. Each of the playable characters has a distinct fighting style. Parasol for example uses her kingdom’s army and an umbrella that fires napalm balls. Peacock uses a variety of 20’s era inspired cartoon tools when fighting. Such an odd group of characters makes it interesting to try to master their individual fighting abilities. It’s not only the fighting moves that are different as playing with each character feels completely different.

Parasol, again, just for example, can easily link together several of her normal moves. Cerebella will be able to receive one hit without taking damage during a dash. Such level of detail is reassuring and will mean that players can focus on a set of characters when trying to learn how to fight. Fortunately fighting in Skullgirls is not only reserved to skilled players. A tutorial system within the game will attempt to teach players how to play, and not just focusing on showing the various fighting moves.

This should make it possible for anyone to, at the very least, learn enough to enjoy playing the game. There are only a couple of in-game locations revealed so far, and one of the most prominent ones shown so far, is a church. What is great, though, is how the lighting effects change depending on location of the character, under lamps, for example. It goes without saying really,  but the visuals are one of the highlights in the game. They certainly help to keep the flow of battle steady with smooth animations that will leave players amazed at the level of detail. 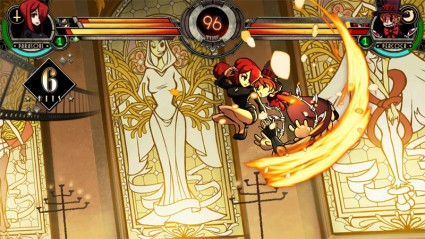 The art style in Skullgirls is to die for.

Skullgirls is showing a lot of promise thanks to the strong cast of characters and all the features shown so far. It gets some inspiration from other fighting games but manages to improve on anything that may seem familiar. Skullgirls is shaping up to be a pick and mix of the best features in fighting games, with some very clever ideas of it own thrown in too.

Skullgirls will be out in early 2012.