Randal is having a strange day. He’s been fired, twice, seen his best friends corpse, twice, and been accused of stealing on several occasions. Of course, Randal is a kleptomaniac, so the last one is kind of understandable, but still it is a very strange day.

He has somehow managed to get himself in a Groundhog Day situation, and must now figure out how to set everything right, get himself out of the loop and save his best friend from various gruesome, though hilarious, deaths.

This is Randal’s Monday, a new point and click adventure that feels very old school, and I mean old school. You play as Randal, voiced by the Randal, yes, the one from Clerks, Jeff Anderson himself.

In this preview, I played through the prologue and first three episodes, and it caused me to remember why I stopped playing games of this type before. Not because they were bad, far from it, but I couldn’t never quite work up the patience to sit and figure out how to get that particular object to interact with another in just the right way to make something happen.

That is what Randal’s Monday is all about, picking up objects, potentially combining them together to make new things, then using them on objects or people in the world to get past puzzles and advance the story.

At first, I thought the story was really slow going, and had to start it again as it lost my attention part way through the opening scene, but once I let it in, Randal’s Monday started show its true colours and I started to really enjoy my time with it. It is definitely not suitable for work, or kids, or anyone slightly sensitive to offensive language and sarcasm, but that is the charm lying just under the surface. 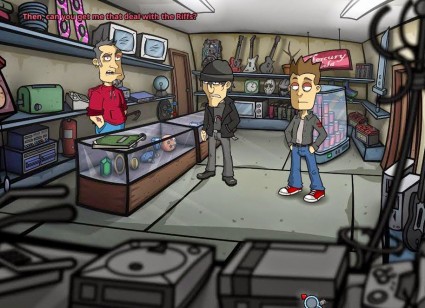 Can you spot all the hidden references?

There is tons of dialogue here and, but as it stands right now, some of it can go on for a little too long. If you are a fan of gamer and pop culture, then this could be right up your alley as Randal is constantly referencing movies and games, and the visuals are stacked with winks and nods, like the Proton Pack in the pawn shop or the Q*bert poster in his best friend’s apartment.

Visually it’s great looking, with a very neat cartoon style that could easily transfer to a late night TV series. It actually reminds of the cartoon version of Clerks, but this is much better.

The biggest problem, as it stands, is the total lack of a hint system. It encourages you to think logically about the puzzles in order to solve them, but in several cases there is no logic so, true to genre-form, you end up trying to combine everything in your inventory with everything else, or use everything on something in the world rather being able to think about the logic involved and go from there. 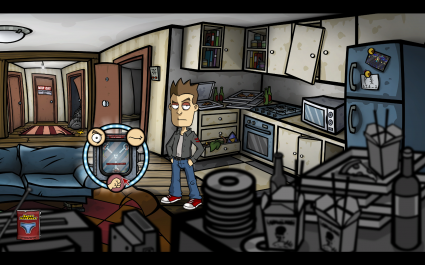 And I thought my kitchen was messy

For example, a puzzle involving a cocktail requires the use of a battery, rat poison and a razor blade so you can make a drink to knock a priest out. The poison is understandable, but the battery and razor are not things you would logically put into a beverage. A simple hint system would solve this problem, even if you have to wait around for Randal to give the hint or go to someone specific for help.

Obviously it is still in development, so this could be changed before release, but my time with it made me want to play the full game to see what other insane things and witty comebacks the developers can throw at me.

Randal’s Monday is shaping up to be a very good, very old school point and click adventure through time and space. I just hope a hint system is implemented or the puzzles made more logical as right now frustration can easily set in.

Randal’s Monday is set for release later this year on PC.