Gaming is no longer just for those of us willing to pony up the cash for a games console or a powerhouse PC. These days gaming is huge business on phones and tablets too, and let’s be honest, no matter how elitist “core” gamers can get about these types of games, we pretty much all play them.

With Flappy Bird recently making big headlines for breaking 50 million downloads, then getting removed by its maker, will it make the list of TIMJ’s favourite mobile or tablet games? Do the team prefer their birds angrier or do we believe the only list a bird belongs on is a menu? Read on…

You’ll need to harvest your crop, mine for rock, lumber wood to produce materials, all while building an army to protect you from other players’ attacks while you’re offline and to take into a series of good old fashioned RPG style turn based battles when you’re on.

Every day you get a bonus which might be a farm, or a battle card used to help when you face other armies, and collecting your taxes from your citizens is paramount to continued growth. I’ve found it incredibly addictive since downloading a few months ago and top it all off it’s completely free to play. Everyone’s a winner! 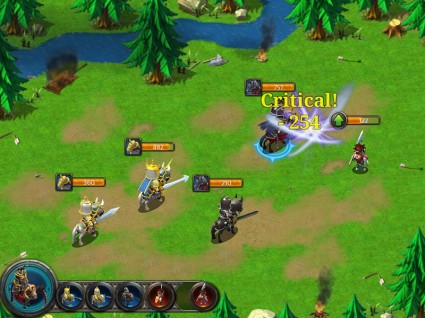 The hottest game on Windows phone? Phil reckons so.

Neil Hughes (Site Manager) – Football Manager
I’m one of a strange breed of geeks that doesn’t play too many games on my tablet or phone and even resisting playing The Walking Dead Season 2 as I wanted to soak it up on a big screen on my Xbox One (although I may buckle very soon).

However, the one game that will make even the longest journey fly by is soaking up a season of Football Manager on my iPad. Sure, it’s a trimmed-down version of the popular PC franchise, but I defy anyone to get past the pre-season friendly stage of a career without being completely immersed. I find myself cheering a couple of dots on a screen, screaming like a mad man when my midfield maestro is hacked down and out for the rest of the season, or conceding a losing goal in the FA Cup semi-final after 90 minutes.

Essentially this is what gaming is all about; it takes me back to a time where fancy graphics and cut-scenes simply didn’t exist, but a combination of the game and your own imagination created something so much more rewarding.

This often carries over into real life, and I even find myself keeping an eye on the scores of Exeter City on a Saturday afternoon, simply because they offered me a chance after I was sacked by Derby County. I had two successful seasons with them and somehow find myself supporting a team that I managed virtually! 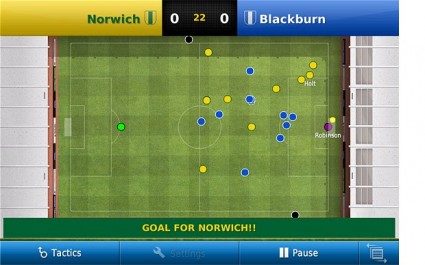 Football Manager. My vote for game likely responsible for the highest number of divorces and job losses. The good news is you’ll be so busy having just one more match, you probably won’t notice…

I love the entire franchise so much because it presents you with a puzzle and many different ways to solve it. Destroy all of those pigs any way you want and then move on to the next stage. Want a greater challenge? Get three stars. Want an even greater challenge? Destroy everything on screen. Want to tweak the formula a little? Have some different birds, boss fights, zero gravity, force powers, and light sabres. All of this and each level only takes a few seconds to complete.

The Angry Birds franchise has kept me interested for four years by giving me a steady stream of updates and variations on the formula. The first boss fight in Angry Birds Rio had me grinning non-stop. Playing the recreation of the Death Star trench run in Angry Birds Star Wars was incredibly fun. I’m always looking forward to what they do next (I know nothing about Angry Birds Stella except that I want to play it). Some of it works and some of it doesn’t, but whatever aspects you like, it’s almost guaranteed that you’ll get more of it.

The original Angry Birds may be the best $1 I ever spent on a video-game. It is still being supported and received its most recent update in December 2013, bringing its total number of levels to 438(!) plus bonus levels. It is a series that I originally only played while commuting but it eventually became something I could play at any time.

Confession: I love these games so much that I bought Angry Birds Star Wars on PS4. Yes, I’m one of those people. 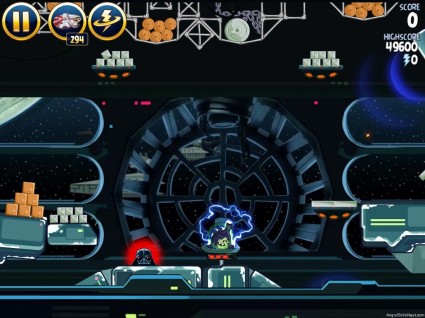 Luke, I am your father. Hang on a minute, you’re not even the same species!

Andy Corrigan (Editor) – The Organ Trail
This could be considered cheating as I first discovered The Organ Trail on PC, but it’s ultimately become my go-to mobile game when looking to kill ten minutes on my commute and I can’t be arsed fetching my Vita/3DS from my bag.

Technically a spoof of MECC’s 1971 classic The Oregon Trail, Organ Trail – as many games do these days – adds a zombie apocalypse spin to proceedings. You and your party trying to travel from the US West coast to East, fighting off the undead horde, bandits and the harsh environment as you travel. Along the way you’ll stop at every major city in between to rest, take stock, trade and do missions to earn resources in preparation for the next leg of the journey.

Much of Organ Trail is hands-off as the focus lies in managing resources and keeping your party alive. Can you afford to trade those bullets for the car battery you so badly need? Is it worth trying to get to the next city with just a small amount of food if you buy the extra fuel? Are you a good enough shot to scavenge here for more supplies to keep you going? Can you rest enough without using up too many rations? Will you put your dying, dysentery suffering companion out of their misery or try to find medical supplies at the next stop?

These are type of questions it constantly asks of me, and I’m always compelled to find out.

PS. The chiptune soundtrack by Ben Crossbones is fucking incredible, I strongly suggest you check it out. 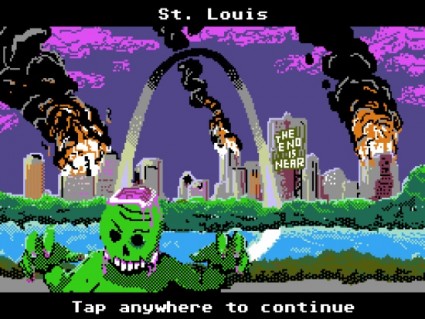 I wonder if you could help me with how to act as a zombie; I’m a bit green you see… (and hence the zombie groan was born).

Matt Parker (News Editor) – Ridiculous Fishing
For me, it’s Ridiculous Fishing. Everything about it is near-perfect, except for maybe the music which isn’t to my taste. It says a lot that the game controls by tilting left and right, yet despite this, I couldn’t stop playing it.

You cast your fishing line into the ocean and move your hook left and right. At this point of the game you need to avoid the fish, as you want to get your hook as close to the ocean floor as possible.

Then it switches. If you hit a fish or the bottom of the briny deep, you start reeling your line back in. Now you want to hit every fish you can. The obstacles you were dodging seconds ago you’re now desperately trying to hit. Such a basic premise, but it plays out extremely well and is immediately understandable.

Once you reel the fish to the surface you don’t simply plop everything into a net. This is a Vlambeer game – things need to be blown up, or at the very least shot at. You fling the fish into the air and with your selected weapon, proceed to blast everything to smithereens. Just don’t shoot the jellyfish.

Vlambeer do a great job of constantly dangling something new in front of your face, making the game supremely simple and blowing up fish extremely rewarding. There’s no tutorial to wade through, no micro-transactions and no waiting for stuff to be built.

Where a lot of mobile games are simply apps that allow you to unlock things through patience, Ridiculous Fishing is a game with a capital G. 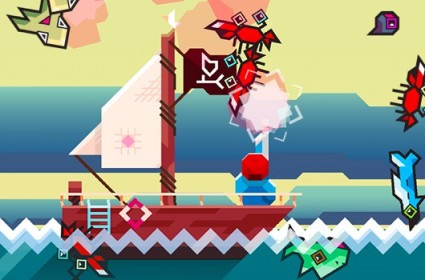 BOOM! What’s that? You wanted to eat the fish?

Andy Buick (Podcast Co-host/Staff Writer) – The Room
When mobile games first started to increase in popularity, I found I didn’t get on well with a lot of them as their user interfaces were badly designed, trying to shoe-horn gamepad design and other features that didn’t really work. Then the likes of Angry Birds showed that embracing the touchscreen and making a game around that could really work. Somewhat ironically though, my favourite genre on mobile and tablet is actually one of the oldest, but one which was always going to be a perfect fit: the point-and-click adventure.

Mobile devices have finally introduced me to Broken Sword and its sequel, both of which I loved, but my choice of game here is a much more modern take on this classic game form, The Room. The team at Fireproof Games seem to understand the limitations of a touchscreen, and they have made the perfect game for it. Each puzzle effectively takes the form of a virtual Chinese puzzle box, which you then manipulate, and move around in order to proceed.

The puzzles are challenging but not frustratingly so, there’s a great satisfaction in progressing, and there’s a real sense of mystery in the story. It’s also wrapped up in some pretty fine graphics.

The sequel is already out and I’m just waiting for it to appear on the Amazon store so I can get it on my Kindle Fire; it’s currently one of my most anticipated games. 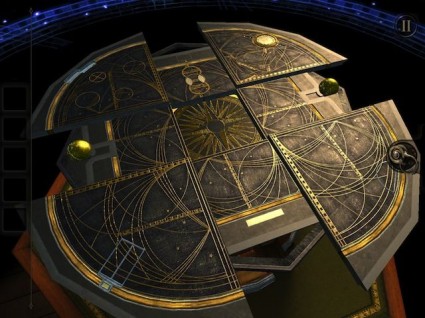 The Room: prepare to scratch your head like you haven’t since Head & Shoulders shampoo was invented

James Sheppard (Sub-editor) – Ski Safari
Although ‘mobile gaming’ is a bit of a dirty word, I actually found it really difficult to whittle down the list to my favourite game of all time. Rayman Jungle Run is a superb mobile re-imagining of the platformer, Super Hexagon is a pure distillation of gaming visuals and mechanics at its finest, and Ridiculous Fishing is, well, ridiculously good. Though perhaps the mobile title I’ve spent the most time on in recent history would be Ski Safari.

When you think of endless runner, the names Temple Run, Canabalt and Jetpack Joyride are banded about a lot, but I could take or leave any of these. There’s just something irresistible I find about zooming down an infinite ski slope, pulling off flips, and hitching rides on penguins, wolves and yetis to avoid an avalanche.

Like the very best mobile games it eschews rubbish virtual D-pads and buttons for a mobile-optimised input – in this case, a single tap or hold of your finger anywhere on the screen – and boils it down to pure timing. Hoards of achievements and unlockables keep dangling those carrots in front of your nose for hours, and the visuals and music are incessantly charming. An endless runner (skier?) I could play endlessly. 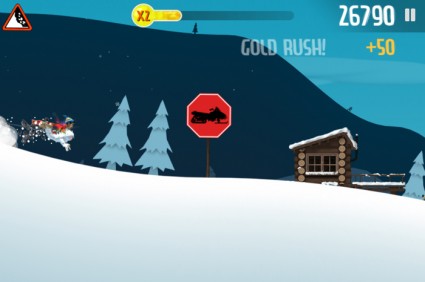 Have I mentioned that you can ride on the backs of yetis? Yetis!