A Trip to EGX Rezzed

Gaming conventions are something of a rarity in the UK. While our cousins stateside enjoy one major event every couple of months, we get maybe one or two a year, and they rarely produce announcements on the scale of E3 or even Gamescom.

When I started writing for This Is My Joystick, a post in the staff forums mentioned EGX Rezzed was coming up and it took my interest. Looking into it, I decided it looked cool, and I hadn’t been to such an event in a few years so really wanted to go. Running it past my wife, she agreed to come, and so we headed to London for our first EGX Rezzed.

An event put on by our friends at Eurogamer, EGX Rezzed is a more indie-focused event, showcasing the best games from small developers from around the UK and the world. Held at London’s Tobacco dock, I was impressed by how the show was set up. The space had discreet, glass panelled rooms dotted all around, each one containing a distinct set of games.

For example, one area had all the upcoming ID@Xbox games, while another focused on my local game developer/publisher and creator of Worms, Team 17. There was an area for merch, a big area for a small set of PS4 games such as Bloodborne, and even a cafe and bar.

The show was open on Thursday, Friday and Saturday, with Thursday being a ‘preview’ day that had a smaller attendance. I went on Thursday, mainly for the smaller number of people but also because I wanted to go to the BAFTA Games Awards that night (more on that, in a separate article, coming soon).

There was a real sense of enthusiasm throughout the whole day. The attendees were there to play games they were excited about, and the developers were more than happy to show them the fruit of what they’ve been working on for months or years. Everyone had a smile on their faces, and you could tell that everyone in attendance just loved gaming, loved playing and creating, and it was a joy to watch.

I played a couple of games that had just one station, with a white cardboard wall just behind the screen that had the name of the game written on it with felt tip pen. It was kind of glorious; this was the indie scene at its peak, the DIY nature of it all embraced and held aloft, proud, saying “We will not go quietly into the night!”. Ahem, I may have gone a bit Independence Day there, sorry…

If you want to see the most exciting, fresh games, games that could well change how you think about this hobby, Rezzed seemed to be the place to be. I have a couple of highlights, but really there are too many write just one article on, and I was there for only one day, so seeing everything was pretty impossible.

Here are my top picks: 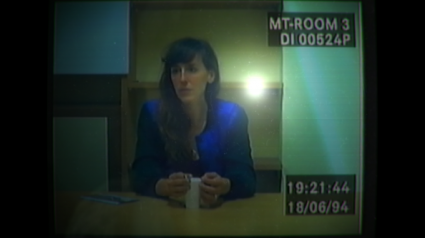 Anyone remember The Bill?

This is one of the most interesting games I have seen in years. The flyer says it is about ‘A woman talking to the police’. It isn’t wrong. Her Story presents you with a database screen that allows you to search certain terms, bringing up small live action videos of a woman being interviewed.

Watch a couple of videos and you soon learn that someone connected to this woman has been murdered, and it becomes clear you must dig through the videos to work out the culprit. Each video allows you to add notes to it to help you remember what was said, and it isn’t linear, so finding one searchable term in one clip can see your search results return clips for a couple of other interviews with the woman.

It is a genuinely different take on playing a detective – no action, no cut-scenes – you are simply left to figure it out on your own, using just what the woman said. I cannot wait for this game to be released; I haven’t been able to stop thinking about it since I left the convention.

A Good Snowman is Hard to Build 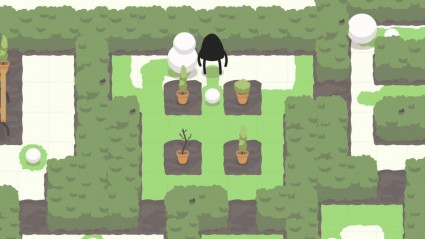 Everyone loves a nice little puzzle game, so everyone should check out A Good Snowman is Hard to Build. It was developed by just two people, and has you playing as a monster creating snowmen. It’s simple, yet not so much.

Each small section gives you three balls of snow of equal size. The problem is that you have to have one big snowball, one medium snowball, and one the same size as it started in order to create a snowman and move on. Moving the monster into a ball moves it, making it pick up the snow on the ground and thus get bigger.

It sounds simple and easy to master. I got two snowmen built before I couldn’t figure out how to proceed on the next section. I kept trying but with other players watching, I started to get to the point where, though I wanted to figure it out, I had to get up and walk away. It has vexed me ever since, and if it does that, it must be good. I have bought it on Steam as it is on sale now, so if you are intrigued, go pick it up and get building. 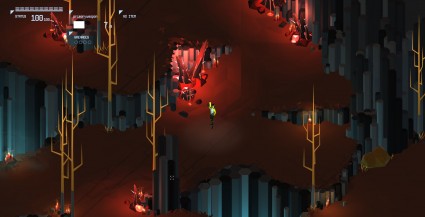 Beacon just looks cool. It harks back to the old, blocky VR from the 90’s with its art style, but is somehow modern, bright and compelling at the same time. The build I played was very early and was missing some features, but I cannot deny that the art stayed with me.

You play a guy with gun, shooting stuff. I didn’t see more to it during my time with it, but I had fun running around and exploring, killing anything that fired back at me, or the strange glowing bugs that slid across the ground, leaving strange slime in their wake.

Looking over the Beacon‘s webpage, it seems I missed the roguelike nature of it, but again, it was a very early build. The art looked awesome though, and I cannot wait to play more. 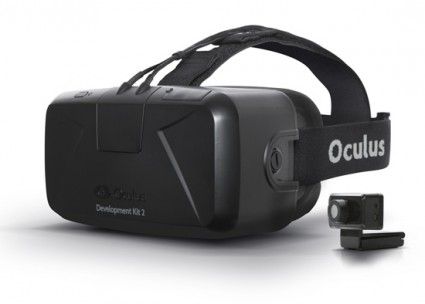 I had my first go with a rift at Rezzed, and it has made me more excited than ever. I have been sensible and decided to wait until the consumer version of the device is out before indulging, but damn, did my short time with it tempt me into getting a DK2.

The game I played was kind of irrelevant; I was there to try the device, not the game, and while I am pretty sure it wasn’t quite calibrated correctly due to some very fuzzy lines, being able to look around the environment was very cool, and I am now officially on board with VR. Now that Valve has unveiled its offering, I am not sure the Rift will be what I end up getting, but VR is the future, I have tasted it.

XCOM: The Board Game 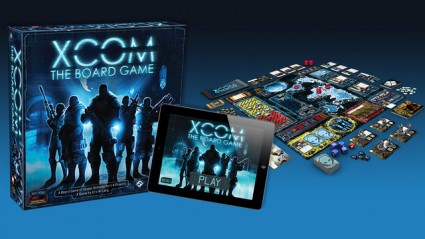 I get my gaming fix however I can, and board games are a firm favourite of mine. The board game area at the show wasn’t exactly massive, but showed off a few games, one of which was the board game version of the classic XCOM.

The game is co-op, and each player takes control of part of the XCOM force. So one player is in control of the finances, one the research, one the ground troops and another the satellites. Its a bit more complicated than that, but I don’t want to spoil the fun of playing for yourself. Interestingly, the XCOM board game uses a smartphone app to dictate when aliens arrive, where, and how many, setting up the scenarios as you play. It’s a cool little twist and adds an element that is completely out your control, kinda like an alien invasion.

Working together helps you win, though you are definitely out-gunned and outnumbered most of the time. I really enjoyed playing it, and if I had board game playing friends who would be into it, I would definitely buy it.

Should I go next year?

Hell yes! If I can, I am going again next year. It was really cool to not only see the indie games coming out soon, but also to become aware of some of the more esoteric games available right now. REZZED will get you to play genuinely different things, and you might just find your new favourite game.