All Zombies Must Die

If there is one thing that I can’t stand in video-games it’s zombies. In fact, zombies in general just aren’t my thing and I am yet to have a truly enjoyable experience via film, game or television with these brain-eating creatures.

It is also fair to say that this generation, zombies have been done to… well… death, really. We’ve had the FPS team-based Left 4 Dead and the stereotypical B-movie style slug-fest of Dead Rising with pretty much everything in between, including a tower defence game which arms you with nothing but a few plants.

Imagine my surprise, then, when the code for yet another zombie-based title came into the TIMJ offices just before Christmas, and I was handed the task of taking Double Six’s new action-RPG for a test run. Could All Zombies Must Die finally give me an experience worth shouting about, or is it just another mind-numbing slug-fest?

Life mirrors art
You initially take the role of Jack, a young man who loves his video-games and who is having a few woman issues (like any one of us, basically). Jack’s day is made worse by the fact that his town, called Deadhill, is being overrun by zombies (let’s be honest; with a name like that the town was destined for trouble). You will need to lead Jack through various levels and on several quests to save the day.

Along the way you team up with the ex, Rachel; a geek called Brian, who may or may not be responsible for the zombie outbreak; and a friendly alien called Luxo. This eclectic mix of ‘heroes’ are all that stand in the way of Deadhill becoming a living graveyard. 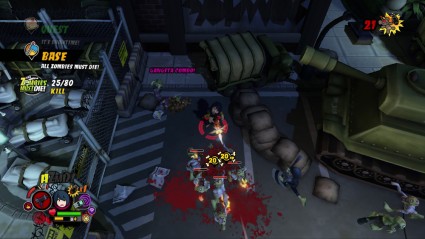 28 days of the living dead
Gameplay couldn’t be simpler, with you controlling your character on the left stick, aiming with the right and firing your selected weapon with RT. Each character can carry one primary weapon which can be changed at your base, and an additional weapon that can be interchanged during levels by simply walking over an alternative. You can swap between the two-armed weapons with RB, and also resort to fists at any time with a press of the B button if you need to preserve ammo or are just feeling a bit brave. Weapons can also be upgraded or crafted at the base if you have the correct items and recipe, which might make them more powerful or add an extra kick (more on that later).

The levels, by and large, take the form of you finding the exit, which is protected by a Gatekeeper. These Gatekeepers are robotic sentries that manage electronic barriers set up to control the zombie outbreak. They will set you a task to complete before they let you through to another area, which could range from ‘kill x amount of zombies’ to ‘find a certain object’ or even ‘kill specific zombies with a set weapon or in a certain state’.

Zombies can be manipulated by the environment or your upgraded weapon, putting them into a secondary state. For example, if they run through fire they become fire-affected; hit them with a police siren and they go sonic. In the crafting area you can create weapons that have various effects assigned, which will turn the zombies into that state. As a simple example, the first recipe I picked up was for a Dragon’s Breath Shotgun which requires firewood and a shotgun, and causes zombies to turn into the fire state.

Selecting the right weapons for the level ahead is helpful but not essential; the problem is that although you might know your main goal moving forward, you will have no idea what your upcoming tasks might be from the Gatekeepers until you actually get to them. Then you may realise you have a fire weapon rather than a sonic one, so achieving your target is about a hundred times more difficult.

At certain junctions in the game a base becomes available by wiping out all zombies. These ‘All Zombies Must Die’ levels are also where you unlock the additional characters, and once cleared the level becomes a safe haven where you can create weapons, swap characters and upgrade your chosen character with XP. XP is gained for every kill and also for picking up items, and will allow you to upgrade your character in attack, defence, health and speed. 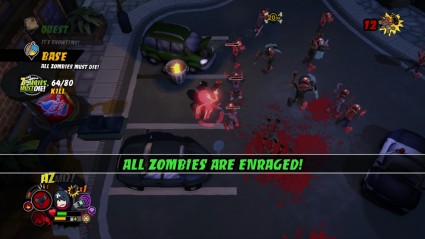 Enraged zombies, the only thing worse than a woman with a grudge.

Scattered through each level will be several searchable objects like a bin or car boot which might contain power ups, extra ammo or the AZMD developer cards. These are a nice little twist to the usual collectable item fare in modern gaming and, for once, I am determined to complete the set of 32 (which may take a while).

Searchable items are highlighted with a magnifying glass, which turns into an exclamation mark as you pass nearby, and you search the item by holding down A. During this time you are vulnerable to attack, so you need to pick and choose when to search or risk dying in the process.

AZMD is pretty much an old-school arcade action-RPG where dying means restarting the level from scratch; all bonuses, items, weapons etc. are lost and you go again from the beginning. Fail a few times in a row and you’ll have the option of weakening the zombies, but trust me, it can be really tough and gets frustrating at times. Fortunately it never takes itself too seriously, making light of the fact that it uses a lot of clichéd zombieisms. So, just when you think you’re going to launch the control pad through the TV, you instead end up smiling at the utter cheese in front of you.

Beauty or brains?
Visually AZMD takes the Plants Vs Zombies carton style ahead of Left 4 Dead’s more gritty appearance, and along with the scripted dialogue this really sets the tone for the game. It may be about a never-ending swarm of killer zombies, but this is a light-hearted affair in every sense.

The game is viewed from above, at a distance that shows just enough of the map without losing any detail to the environment or characters. This is stretched slightly when you start playing co-op as you can’t really stay grouped together, and the camera pans out as you separate, testing the game engine to its fullest. I’ve only gone as far as two player co-op and on a few occasions that caused enough of an issue with the camera as it was, so I dread to think what might happen with the full compliment of four.

Hummm…
Audibly, there’s not a great deal to AZMD, with no voice-acting at all and a fairly simple background tune throughout. This does change from a more upbeat score to a slower, calmer track when you enter a base that has no zombies in it. The tune has a spooky effect, and like all aspects of the game is exactly what you’d expect from a zombie title. 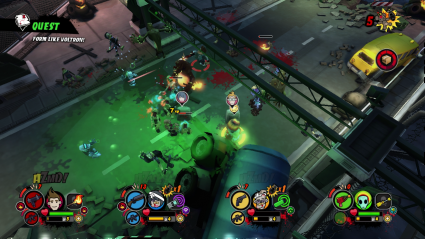 Elsewhere the effects are good, with the sound of burning wood as you walk past a fire and footsteps or wall mounted fans clearly noticeable at the right times, and all of the weapons have a recognisable and satisfying accompaniment.

Stand together
As briefly mentioned above, AZMD offers full, four player co-op locally but has no online play, which in my opinion is a real shame. Don’t get me wrong; the co-op is fun and challenging, welcoming both teamwork and competition in equal measure. First you’ll work together to beat the onrushing zombies, then shoot each other to fight for a pick-up, before having to revive your fallen comrade to help you out again when the going gets tough. On the post-level XP screen you also see who won the round, and awards are given for outdoing your pals in kills, revivals and various other areas.

The negative is the camera as mentioned above, and when you’re on a single machine there is no room for manoeuvre, literally, as you might find yourself trapped in a corner simply because your mate took a step too far in one direction while escaping a Jogger.

All Zombies Must …
Overall I cannot deny that I have thoroughly enjoyed my time playing All Zombies Must Die; as a fairly simple arcade title it offers both a solid challenge and an adequate reward without requiring you to commit a huge amount of time or thought to develop your character. It looks nice, sounds okay, and at 800MP is pretty good value for money.

However, it doesn’t do anything particularly impressive or different, and although the stereotypical plot and character models (that it laughs at itself over) add a certain charm, it can get a bit boring and repetitive.  In addition, AZMD doesn’t excel in any individual area; the graphics, sound and gameplay are all pretty much what you’d expect. Despite the enjoyment I’d had by the end of my initial playthrough, I was left still waiting for something to make me sit up and take notice.

To that end, I recommend you: