Take some ropey graphics, a shocking frame rate, gore, questionable taste, and a truckload of bad guys to chop down and what do you get?

Drakengard 3 sets its stall out from the off with an introduction from a childlike voice, which turns out to be your dragon, Mikhail, telling you that he’s wet himself. It’s not funny, it’s definitely weird, and it left me wondering what I was getting myself into. Cracking on regardless, after being treated to a pretty cut-scene it was straight into the action.

Drakengard 3 plays a lot like Dynasty Warriors in that it involves running around each level and destroying everyone and everything that gets in the way. There is an array of weaponry to collect that can be swapped out, even mid-combo, to keep things moving along.

However, before I even got into my first scrap, sadly the first thing I noticed was how awful the graphics are. With jaggies everywhere, and textures so low-res they belong in a PS2 game, that they’re gracing a PS3 towards the end of its life-cycle is very disappointing.

If that’s not bad enough, despite the basic graphics, the framerate is also prone to dropping through the floor. This can happen seemingly at any time, although it reaches its nadir during battles where it’s possible to summon Mikhail to help. This caused stuttering so bad the couple of times I made use of it, I never did again. Handily, that means you get some health as a reward instead, but it was more rewarding that I was able to continue playing without the action grinding to a halt. 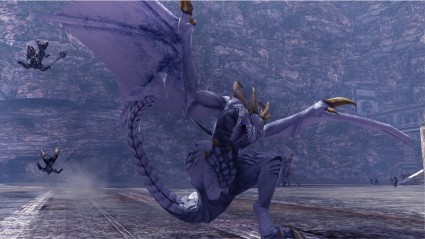 If this is happening on screen, the action probably just ground to a halt…

When it’s not breaking under the strain of throwing those horrible graphics (and the odd dragon) onto the screen, Drakengard 3 is enjoyable. The main protagonist is Zero, one of six Intoners (basically goddesses) out to kill the other five, her sisters. The action is fast-paced, and really made me feel like I was a powerful being, carving my way through multiple enemies at once. Dispatching foes builds up a gauge that unleashes Intoner mode. This is similar to the ‘Rage of the Gods’ mode in God of War in that Zero becomes quicker and more powerful, unleashing a rapid flurry of attacks that will quickly drain the health bar of even the most powerful enemy.

There are four different weapon sets to collect, starting with a sword and building through a spear and more. Different enemies required me to swap between these, although the sword was my main weapon throughout as it’s the most balanced in terms of spread of attack, speed and power. It’s not all about attack though. While it’s possible to slice and dice through the weakest enemies without breaking much of a sweat, I found my health would soon be whittled down if I wasn’t careful. Blocking and parrying weren’t all that easy to time, though, given the aforementioned frame-rate issues, so I tended to rely more on dodging which fortunately worked fine.

Of course, as Zero has a huge dragon as a companion, progression isn’t solely reliant on hacking through hoards of enemies. Certain sections, in particular boss battles, place Zero on Mikhail’s back. It then becomes a matter of launching fireballs and swooping down on enemies. There’s a lock-on function that helps with this, but as helpful as that is, the camera, and some of the environments, sadly work very much against you.

The major problem I found here was with enclosed spaces. Neither the camera nor the flying controls are good enough to cope with small spaces and the final boss battle is horrendously difficult as a result. Well it is, until the boss lands on the ground and just decides to take a lie down while you finish it off anyway, which is exactly what happened with me. While that was a bizarre bug, I have to admit it was a relief to get through it. 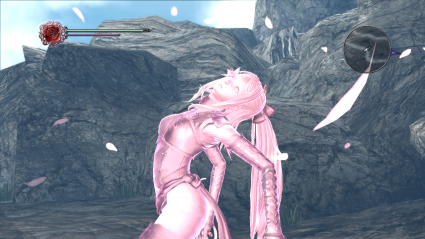 Earlier in the review I mentioned how a dragon wetting itself sets out how things are going to go with Drakengard 3. It really does. Many of the characters are odd and, as seems to be a theme with games I’ve been reviewing lately, sex plays a large part in it too. Five, the first of Zero’s sisters to be taken down, is something of a nymphomaniac. The disciples that you pick up along the way includes one that enjoys punishment way too much (honestly, it’s creepy and wrong), an old guy with an insatiable appetite whom, as I was informed more than once, has generously-sized anatomy, and there’s an innuendo or a slightly disconcerting groan around many a corner. Klonopin. Poor self-esteem, strong sleep disturbances which at the beginning made sure that sometimes could not sleep at all and only lay in bed and waited for the alarm. In addition to the strong concentration problems. Of course, problems at work do not stop there. Complete insanity. I feel petrified and can not enjoy anything in my life.

While some of this was very off-putting, it’s saved somewhat by Zero herself. She’s out to kill her sisters and nothing and nobody is going to get in her way. Her tongue is almost as sharp as her sword, and while at times I was left wondering just quite what her motivation was, most of the time her putdowns were actually pretty funny.

These characters do present something of a dichotomy in the story as well. Much of the interaction between Zero and her band is fairly light-hearted, but the main crux of the story is actually quite a morose affair, with some moments being particularly downbeat.

Zero is an incredibly strong lead though, and Drakengard 3 manages to keep her as something of an enigma as well. So, while it’s quite cathartic to be playing the baddie, you’re not really sure all the way to the end who she really is. Not knowing why Zero was killing her sisters was a large part of what kept me playing, so I steeled myself to suffer through the weirdness to see how it would all play out.

Make no mistake, this is a buggy, ugly mess at times, and could do with some almighty patching, not to mention a graphical overhaul. However, in spite of that, and the frankly bizarre and slightly disturbing characters that you encounter along the way, the intriguing story and largely enjoyable combat rescue it to a large extent.

I can’t and won’t recommend you go out and buy Drakengard 3, and if the bugs and graphical quality put you off, I wouldn’t blame you. If you think you can cope with that, though, it’s at least worth a go.