Love it or hate it, football is almost always in the news. From players tweeting inappropriately, or the age-old debates about diving and goal line technology; to what constitutes world-class, and the latest YouTube clip of another Messi wonder-goal; you just can’t get away from it.

The battle for supremacy on console football is almost as passionately fought these days. Having seen what Konami produced with PES 2013 I was given the task of seeing how EA Sports FIFA 13 measures up. Read on to find out.

As ever, FIFA gives us a plethora of game modes, and like last year it is all underpinned by the EA Sports Football Club. This means that everything you do in the game earns you XP which goes to your favorite club and earns them a place on the overall ladder. The big addition to the EA Sports football club this year is that in addition to the XP you also earn coins, which can be used to purchase in game items. These items include classic kits, balls and boots, but most importantly also include boosts for your online pro.

Each of the game modes has seen an upgrade from last year to push the experience on a bit, ranging from fairly subtle upgrades in the single-player career mode to the inclusion of online and offline seasons to Ultimate Team.

The latter is quite a big deal, as it adds a ladder-based system to what is probably the most played mode in the game, bringing the promotion and relegation mechanic that has been lifted almost directly from the seasons mode. The downside to this is that it doesn’t use the same matchmaking skills that Seasons mode does, so you don’t get paired with teams and players at a similar level. So that Bronze team you’re holding on to will regularly face the World All-Stars side that includes a front three of Messi, Ronaldo and Van Persie.

Premier League
The other big introduction to this year’s game is the skills training, and it is here I make my first reference and comparison to the other big football franchise. On the older PES games there was a superb little training mode that gave you the option to hone your skills in a fun yet professional looking setup. This has dropped off somewhat this generation, but fortunately FIFA 13 has taken this mantra on and added another level. 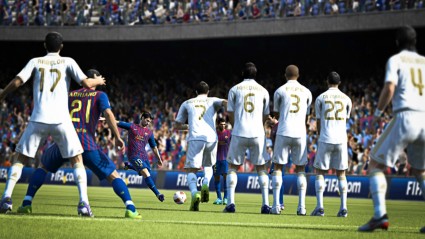 EA Sports have given us a selection of really good mini games that will see you dribbling round cones, shooting at moving targets in the goal and trying to kick the ball into rubbish bins set up at various distances. These are all designed to teach you the skills you’ll need on the pitch, in a much more player-friendly fashion than you’ll see anywhere else.

Unfortunately these brilliant mini games also highlight all that is bad with FIFA 13, which is that the game mechanics just don’t measure up. Passing and shooting animations seem incredibly slow, meaning that you will often be left screaming at the box as you try and spread the play only to be tackled before the graphical process has completed.

The player AI also appears to have stood still from last year, with players literally standing still unless you press the button to force a run. Even then all they seem to do is run straight at the player directly in front of them with their arm in the air.

This makes building play and keeping possession something of a frustrating challenge. What’s more, with the default controller settings of assisted everything, the ball will travel in a totally different direction to the way you aim at times, adding an extra layer of frustration. Fortunately these assists can be altered or removed, allowing you to be slightly more in control of the play.

My other issue is with the changes to the first touch control. I applaud that the development team have looked at this aspect of the game and decided that the weaker players at the poorer clubs will miscontrol the ball more often. However, what I don’t like is the fact that these players seem totally incapable of running with the ball, as they will lose control almost every time you sprint.

Changes of pace are an absolute no-no unless you play as the top teams, meaning all the effort taken to recreate lower league English divisions and club sides from the likes of USA, Scotland, Australia etc. are a total waste of time as nobody is going to play as them. 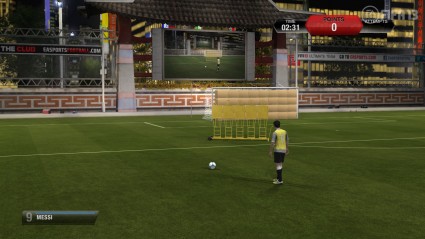 On the flip side, when you do play with the elite players in the big teams the game does play slightly better and allows you to start building your play a bit more rather than just having to resort to a hopeful through ball over the top.

La Liga
EA Sports have gone big on the Windows/Xbox style tiles this year in all of their big franchises to improve the Kinect support and FIFA 13 is no different. These sit under each of the game modes and make navigating through all the menus very simple, even if like me, you’re stuck using the pad. This makes the decision to stick with last year’s more traditional toolbar style menu in the main home page a little surprising, but this too has the usual EA Sports shine to it.

The Career mode main home screen and front end match presentation has kicked on from last year. The Sky Sports tie-in has been pushed and used to full effect, giving us a professional TV-style setup to the game which adds a nice extra layer to all matches. The Stadia, too, are as beautifully rendered as ever.

On the pitch, however, I must admit I have been left feeling a little underwhelmed. This is not because FIFA 13 doesn’t look impressive; it does, but the fact is the player models and animations don’t appear to have moved on over the past twelve months. The subtle upgrades are there, such as the previously mentioned changes to the first touch control which has the weaker players over running the ball or losing control more often, but in my opinion this has come at a cost to the overall experience.

Serie A
Sound is another area where upgrades are incredibly subtle. The main menu has the usual mix of popular music tracks which you are likely to know from the radio, music TV channels or even other games. The crowd chants, again, are much the same as previous years, but perhaps are slightly better used in terms of following the right team and becoming louder at certain key points in a game. 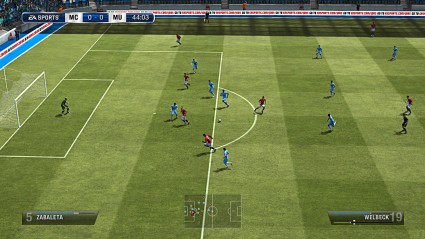 The biggest update to the vocals is in the commentary though, which like the visual presentation has been pushed to add to that Sky Sports Super Sunday feeling. Martin Tyler and Alan Smith are now joined by touchline reporter Geoff Shreeves, who is brought in to update on injury news where relevant, in a move that rarely fails to bring a smile to your face for the sheer class of it.

In addition you’ll get updates on the scores elsewhere that affect your team in the Career mode, in Soccer Saturday style. The play-by-play commentary also appears to be more detailed and less repetitive this time out, and the duo will debate real life events that are updated into the game, again adding some professional polish.

Bundesliga
All the single-player options are available in multiplayer, plus of course the Seasons mode, which allows you to play head-to-head in standard ranked matches, earning points to place you in a league system and join regular tournaments. The matchmaking still works the same as last year where your opponent is matched against your team selection, so if you pick Accrington Stanley you wont face Barcelona. After some initial problems with this process appearing rather slow, this now works like a dream, so you’ll never be left waiting too long for the game to start.

As mentioned, the Ultimate Team mode now has its own version of seasons which works in much the same way, but without this tweak to matchmaking. This means that if you go into a match with your two-star Bronze side you are just as likely to face a five-star all gold opponent as you are if you play with a similarly rated side, begging the question: why bother?

Finally the Clubs mode, and a big positive: I would happily argue that FIFA Clubs is one of the most ground-breaking online game modes for any sports title this (or any other) generation. EA Sports have tweaked again this year to make the interaction slightly better and also made it so you have a separate virtual pro for the Clubs mode, so you cannot earn XP through your single-player career to max out your online pro. I have found this makes the experience slightly better as you are not faced with eleven Messi’s every game. 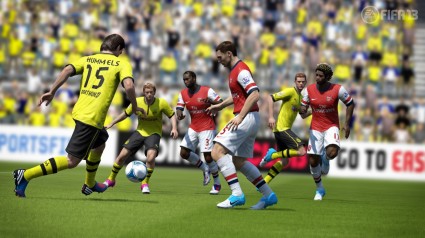 Last man out the door, turn the lights off

Some people are on the pitch
I am fairly confident that most of you reading this review had already decided on whether you were buying FIFA 13, if you haven’t already long before reading this. The sales figures already show that it is a very popular title.

However, I urge caution if you’ve not yet made up your mind. FIFA 13 does a lot of things incredibly well. Possibly more than any other sports title it has a depth of game modes and choices for both online and offline play that will give every football fan what they want. In addition, the improvements to these modes show that they feel there is still room to grow and evolve, which is obviously a good thing.

Unfortunately, as I always say, where it matters most for a sports game is on the pitch, and FIFA 13 is overwhelmingly second best in this area. The player mechanics have not improved from last year’s game and you could argue that they have actually made it less fun to play overall. For that reason I have to say, if it’s not too late, give it a try first.