Every good football manager will tell you the sack is inevitable. The life expectancy at club level these days is less than a single season, and you can’t look at the back page of any national newspaper in the build-up to Christmas without a run-down of who’s leading the sack race. While we fans say that a new man needs time, we happily add to the pressure and call for his head when our team loses three in a row. After all, we know we could do better, right?

Sega’s Football Manager is the franchise that gives us, the discerning football fan, the chance to prove exactly that, and this year’s edition promises to do it in even more realistic fashion than ever before. Can you weather the storm? Can you get the changing room full of prima donnas all pulling in the same direction? Can you persuade the board to give you another six months and a £50 million war chest to turn it around?

The interface for Football Manager 2014 hasn’t changed since last year, so if you are a returning manager you will immediately feel at home with your dashboard. For those not familiar, the design is clean and functional with competition info set out along the top – such as the fixture list and league table – and your more personal info at the bottom such as your inbox and player information. Of course this is entirely customisable, so you can set six of the seven sections to your item of choice with the exception being your fixture list, permanently seated in the top-left box.

The screen you will likely spend most of your time in is your team screen though, which leads you into all sorts of options like tactics, training, contract details and player information. Again you can drill down further, as you can with any aspect of Football Manager. The beauty is that this game is as deep, complex and absorbing as you want it to be, and if you don’t want the wealth of options to choose from weighing you down, you can strip the game back with the Classic mode or tackle one of the pre-set scenarios.

Last year’s scenarios all return but there are almost twice as many in total, with the Portsmouth-inspired Financial Peril being the highlight of the newcomers. While there are only a handful of scenarios to play through they vary in length and challenge, and let’s be honest, they largely mirror all the possible real-life scenarios you can think of, with perhaps the exception of winning a domestic treble. Naturally you will find yourself in these scenarios throughout your career (possibly with the exception of the invincibles), and the joy is in dealing with these different situations as you imagine the likes of Klopp, Guardiola and Wenger do. 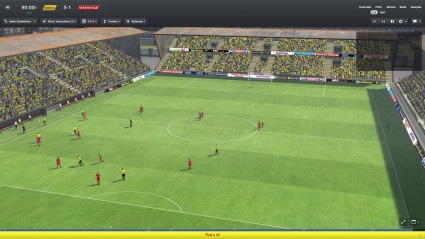 Highlights can really make or break your mood

At the start of the game you can select how many of Football Manager 14’s enormous number of playable leagues you include in your game, and when creating your manager the difficulty stems from setting your playing background from Sunday League to former International, and obviously the club you take on. While it is easier to win games with Barcelona and Real Madrid, you need to satisfy bigger egos in the dressing room and a more expectant board and fanbase, so FM14 is rarely easy.

The most obvious of the changes to this year’s game is with the interaction you have with the board, staff and players. This starts with having to interview for jobs rather than just taking them, and the board will ask you for your philosophies before offering you the job. In addition, you will have the option to alter these in discussion with the board during your tenure. and it adds to the previous options of adjusting your budget or asking to seek a partnership with another club.

Your staff are now more helpful than in earlier versions too, giving you more detailed feedback on players in the youth teams and those you’ve scouted. Player interaction has been developed, giving you more options when talking to your players both individually and collectively. There are also minor tweaks to the player information and tactics which all give you even more control (or areas to get it wrong). 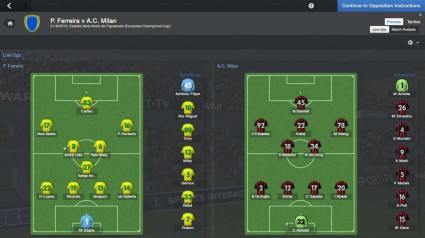 The other key upgrade is in the 3D match engine, so if you are one who likes to watch the game unfold it is now clearer than ever before, and the stadiums are slightly more detailed with spectators that appear to get more involved. Don’t get carried away, though; the visuals are still pretty basic by modern standards and the sound even more so. You’ll hear the crowd noises and the referee’s whistle while in the match view but that’s it – no chanting, no songs from the faithful; just basic cheering.

The final change of note is in the online game modes, as games are now searchable for the first time. This means you have an open game that anyone can join, rather than needing IP addresses and passwords for every game as per previous years. There is also a versus mode that gives you the ability to set up a custom competition within Classic mode. While the search option in particular is a welcome and long-overdue addition that may help you to find a game to join, it doesn’t really add anything to the online experience. I personally still find it a little laboured, and outside of a full-blown community site it can be quite disjointed.

Who needs Fergie?
Football Manager 2014 won’t suit every gamer, and it won’t even suit every football fan, but if you fancy yourself as a bit of a tactician it will certainly get your juices flowing. If you have last year’s version and aren’t too bothered about updated squads or the new features, it might not be worth the additional investment for what are pretty minor upgrades, but without question, for anyone donning the promo jacket for the first time FM14 is comfortably the most complete managerial experience around.