Batman is arguably the single most recognisable comic book hero ever. Dating back as far as 1939, The Caped Crusader has been seen in numerous TV shows, Movies, thousands of comic book stories and, I might add, a fair few video games. Via all these mediums, the Dark Knight has been portrayed as a supreme detective and crime fighter with unquestionable moral beliefs, determined to clean up the streets of Gotham City.

Naturally, a hero of such magnitude is bound to pick up a few fans along the way, some of whom are likely to be a touch on the wacky side (Andy Knight, I’m looking at you buddy) and it is from here that Monolith Productions have invented Gotham City Imposters. Never mind taking the role of Batman, you will take the role of a man who thinks he’s Batman in an effort to stop another man (who just so happens thinks he’s The Joker) from running amok in your City.

So can a game of wannabes elevate itself above the crowd? Read on to find out…

A city of justice

Gotham City has become something of a copycat heaven, where vast numbers of people dress as the Bat and try to follow his example of crime fighting and restoring public order. At the same time, possibly to counteract all this good (and kind of helpfulness) a similar group has decided to take the mantra of Batman’s main nemesis The Joker. You take to the streets as one of the respective wannabes keen on following their hero’s example, to clean up or destroy Gotham City respectively.

A city of Love
The single-player game is essentially a collection of training challenges designed to improve your skills and understanding of the maps while showing you the basic controls. An initiation level in a derelict warehouse with a few other Batman clones takes you through your basic moves and some of the simple weapons to ensure you are genuine about joining the clan.

As a FPS the controller setup is very familiar, with aim and shoot on the left and right triggers respectively, RB launches your Support item, such as a grenade, while LB uses your gadget, which will initially be a grapple gun. On the face buttons Y swaps weapon, X reloads and A is used for a mêlée attack, while B is used to crouch. As I say, nothing new or different here.

The rest of the single-player is a selection of timed challenges within each of the five maps, and will hone skills and understanding, while also building your XP. Building XP allows you to unlock some of the plethora of costumes, calling cards, mascots, weapon upgrades and gadgets to take into the Multiplayer game. 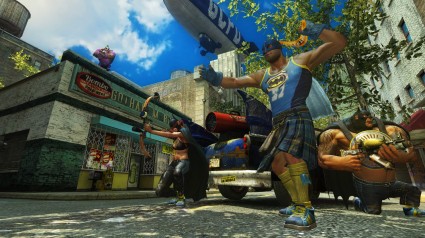 The challenges start fairly simply, with you only required to get around the map utilising the various gadgets designed to get our wannabe Bats airborne. Besides the initial Grapple Gun that you can fire into distant buildings, these include Spring boots that enable you to jump higher, A double-jump producing Insole, a Glider that enables you to (kind of) fly when running over an air vent, or Roller Skates to get you moving quicker. Subsequent challenge levels will have you wielding some weapons and taking out targets while on the move.

Bronze, Silver and Gold medals are awarded depending on your performance and an XP boost is given, with more XP received the better you perform. The time limits are pretty strict with the Gold Medals in particular offering a stern test to even more experienced gamers (read: I can’t get many of them).

As much as these challenges are varied and fun and they do give a solid base of skills in the game, they act only as a starter to the main dish of the multiplayer and as such can become a bit repetitive if you stay on them for too long. Aside from the additional XP for claiming that elusive Gold medal, there is no incentive to go back to them once you have seen what is on offer.

A city of peace
GCI has a fairly gravelly graphical feel to it, which has been lifted straight from the Batman series, but with a kind of hand drawn sketchy appearance to the characters. The menus and the loadout screens the levels are presented on a postcard and your character customisation and the single player challenges are shown in a notebook and folder respectively. This style fits comfortably with the overall feel, being that you are essentially a copycat hero, a fanboy, looking to make your mark as Batman or the Joker. 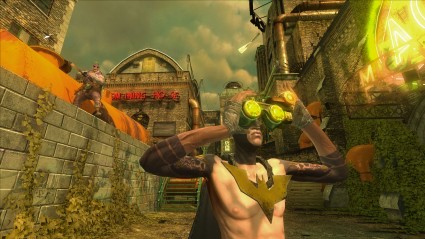 The individual characters, including their costumes and some of the weapons, are really well thought out and again sit comfortably with that geeky, homemade style that runs through the entire title. It adds to the charm immeasurably.

For every one of us
The sound effects and character voices in Gotham City Imposters is, initially, quite amusing and adds to the light-hearted nature of the title. The fact that you can make your character an absolute man mountain and then give him a stupid high-pitched squeaky voice is just one sign of the humour on offer. Another comes when you get taken down in multiplayer and you will get a nice little one-liner to make you feel adequately useless.

The weapons sound pretty good too and bullets ricochet off metal with a nice little ping, while explosives give a nice, meaty boom. The background music on the other hand is fairly low-key in the main, although in the multiplayer lobbies there is some decent variety while you wait.

We all need it
The main focus of GCI is undoubtedly the multiplayer. There are three game modes on offer, starting with the regular Team Deathmatch, and this plays exactly how you’d expect. One team of Bats and one of Jokerz take to the streets of Gotham and basically tear it up. 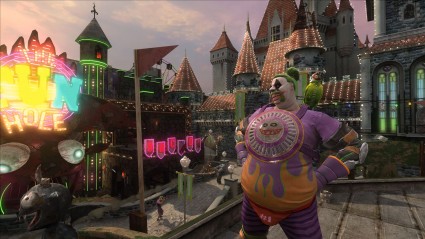 Check out my outfit

The second game mode is Fumigation, which sees our two teams fight for control of three Gasblasters. When the team hold two or all three of these for a period of two minutes, a Critical Mass situation ensues which sees a plague of Bats or a Nerve Toxin released that attacks the opposing players. This is by far and away the least popular of the game modes, although it can be decent fun.

The third option, and my personal favourite, is Psych Warfare. This plays much like Capture the Flag. In this mode each team has a Brain Wash Machine, but need a battery to get it going. The map holds a single battery, which you then fight over and try to take to your machine and protect it long enough to trigger it off. What follows is a state of mind control on your opposition who, for a period of time, are unable to use weapons or gadgets and are left only with an option to run away or slap to defend themselves. The whole time you are in this state, you are being told “you’re useless” by the mind control machine.

There are five maps in total, which offer a good blend of style and each has a mix of open space and hidden areas, while also covering several different levels allowing you to find good vantage points to attack from or escape routes to utilise.

Overall the multiplayer flows quite well and there isn’t too much of a wait for games to get started. Although I have noticed a few moments of lag, these aren’t particularly frequent and don’t overly affect the experience. There are the usual variations of preset classes from sniper to medic and, once unlocked, you can create your own unique loadouts from the wide variety of weapons and gadgets on offer. 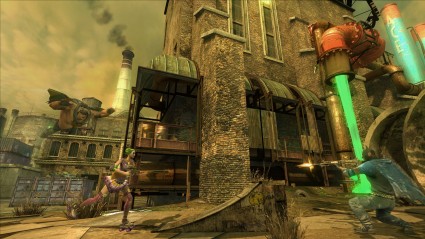 In fact, there is a pretty large amount of customisation on offer overall, with uniform, and body size also being adjustable. Your choices will have an effect on the movement and defence levels of your character, whichever side you end up on.

Can’t live without it?
I’ll be honest and say I really wasn’t expecting too much from Gotham City Imposters bar a bit of fan service. I was wrong to make that pre-judgement, for what we have here is a pretty enjoyable and varied shooter. There is a good variety of maps and weapons and a wealth of customisation on offer, as well as three solid game modes. That’s without mentioning the tough single-player challenges, there ready for when you don’t want to battle human opponents.

At 1200MP I would say it is perhaps slightly overpriced and it is likely to struggle to draw big numbers away from the Battlefields and CODs of this world. That might just limit its lifespan, but if you like your shooters with a touch of variety and fun you’d do well to at least give it a go.