Hank is a cute, yet rather ambitious hamster, who someday dreams of becoming the master of all stunts. That’s no mean feat as he has plenty of competition with Joe Danger and Tony Hawk nipping at his tail. Yet he remains optimistic, and, who knows, with your help, his dreams could well become a reality.

Would you say no to that face?

Hank Hank, hooray!
Hank can’t ride motorcycles. Unfortunately, he never got his license. He also sucks behind the wheel of a car, and has never done a kick-flip in his life. So, how can he expect to be a real stunt-animal I hear you cry? He goes back to what he knows best; confining himself to a stunt-ball. Doesn’t matter if he looks like squished roadkill, or AiAi’s second cousin removed; it’s the rolling that counts.

With a little help from bombs, boxing gloves, weights and conveniently situated ice cubes, our heroic hamster can show off his skills, as he soars carefree through the skies. 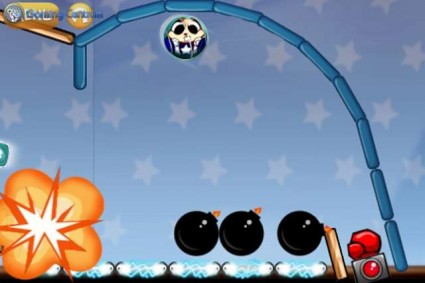 Things get a bit hairy for Hank...

This ball ain’t made for walking
Hank Hazard is a delicious mixture of some of the industry’s most entertaining games. You’ve got elements of Super Monkey Ball in here, but also clear inspiration from the likes of Joe Danger and Cut the Rope.

The game sees our ball-confined hero rolling through a series of mazes to reach the end-target. Of course, Hank could zip through the levels without any real effort in the fastest time possible, but to be a true Stunt Hamster, he also needs to showcase some finesse. Scattered through each level are stars which Hank needs to collect so he can achieve a maximum three star performance. Again, that could be done absent-mindedly, but if the player manages to collect all stars whilst focused on a Nuts Bonus (which varies from completing a level in x amount of moves, to hitting the target at a particular speed) they will truly be a professional stunt artist.

That challenge not good enough for you? Well, for the truly intrepid and adventurous, there are also hidden golden stars which not only bolster your score but unlock hidden levels within the game.

It’s not all straight forward to-ing and fro-ing through the levels, however. In order to reach his goal, Hank will need to evade a variety of obstacles, including electricity balls with frazzling intentions, and fire pits which cinder at the slightest touch.

Fortunately, the controls work exceedingly well, and it’s all about setting up a level in preparation for Hank before letting him loose on it. Rather, the player needs to prepare the safest route possible through the maze by simple touch-screen gestures. Tap the screen to pop items like ice-cubes, blow up bombs, or the boxing glove for it to launch Hank in its intended direction. With such tools at your disposal, it’s not hard to see why Hank Hazard is a real joy to play. 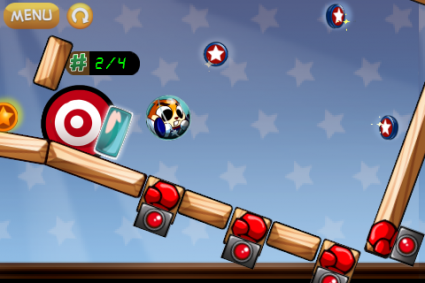 Hank is a Hamster

Cute and fluffy
Hank is just like that pet hamster you had as a kid. He tickles the cockles of your heart with that dinky Captain America-esque suit, and those gooey eyes and buck-teeth. With such an endearing, intrepid protagonist, the game turns your heart into candy mush from level 1. Once it sucks you in, it’s incredibly hard to take your eyes away from it.

Thrill-squeaking
The game has some nice little musical numbers that manage to sway sweetly in the background. It’s very likely you’ll find yourself humming along, while playing and maybe even when you’re away from the game. The game also likes to make sly winks at its net-speak-literate pals by throwing in a ‘ZOMG Huge Air’ and ‘Epic’ when Hank takes to the skies.

There’s no classic tracks on here, but still, “Hank’s Exciting Theme Song” needs to be experienced at least once, if only for the pimptastic, techno drum-beating.

Jump for joy!
Hank Hazard is already an early candidate for my iOS Game of the Year. It is an absolutely superb title that juggles genres eloquently and produces fun effortlessly. If Hank knew you were putting his entertaining and exciting life on the line for only 69p, he’d rightfully gnaw you to death.