The Harvest Moon franchise has come a long way from its humble beginnings on the SNES. It’s hard to think that a farming simulator would gather such a devoted group of fans over the years.

Rising Star Games has supported new Harvest Moon entries for quite a while. The latest one to make it to Europe is the first Harvest moon title to grace the Nintendo 3DS. Harvest Moon 3D: The Tale of Two Towns was originally a Nintendo DS title, so was it worth the effort to release it on a fairly new handheld?

The story for Tale of Two Towns makes good use of the title. Its two towns, Bluebell and Konohana, have been rivals for a few years thanks to a misunderstanding. This caused the collapse of a trading tunnel that connected both towns. The player’s character (boy or girl) fashionably crashes on the way to one of the two towns. The mayor for each town just happens to come to the rescue. It’s then up to the player to pick one town to live in. It’s an interesting format for a series that hasn’t seen much change over the years, but don’t worry as the player can choose to move town, after a certain amount of time. 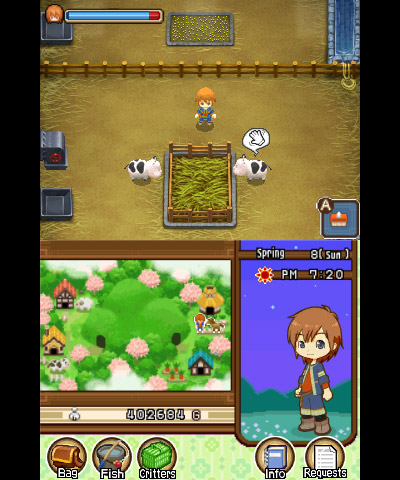 The story doesn’t end after the introduction either. The very goddess that collapsed the tunnel asks the player for help. It’s up to the player to then try reconciling both towns, by entering the popular cooking festival. This gives players a reason to keep playing, since there is a goal to complete.

Gotta plough them crops!
Tale of Two Towns continues the long-standing tradition of providing players with a glimpse at life on the farm. What’s so special about it is that the player can choose a specialised area, since each town focuses on just one. Bluebell focuses on livestock and Konohana holds vast knowledge when it comes to growing crops. It’s a fantastic way to make sure players aren’t discouraged by performing tasks they might find dull.

Life on the farm is not just about growing produce or taking care of the livestock. Each town has its own unique events to attend. There’s even a calendar that covers the four seasons, with each season lasting a month. Events typically consist of community parties, where everyone gets together to socialise. The player is even encouraged to bring food to the events. It manages to perfectly replicate the friendly atmosphere that comes with living in a small town.

People will also post requests on a message board, that the player can attempt to fulfil. Completing such requests will bring the player’s character closer to others. Another wayto get the trust and respect of the town folks is to bring them gifts. There’s even the chance that one of these relationships will become more than friendship. Each of the villages has a unique set of characters with their own personal traits, and anteracting with each of these characters is one of the best aspects in this Harvest Moon.

This is but a small glimpse at the content in this new Harvest Moon adventure. The player isn’t completely restricted to exploring one town. It’s possible to go visit the other town and some of the surrounding rural area. It’s particularly enjoyable to go for a stroll in the woods, with many items to find, such as cooking ingredients. It’s possible to also sell items and farm produce, to earn money to buy items from stores and characters. You’re also able to interact with other players via online/wireless multi-player or StreetPass. StreetPass for example lets players exchange items, which is a helpful feature. 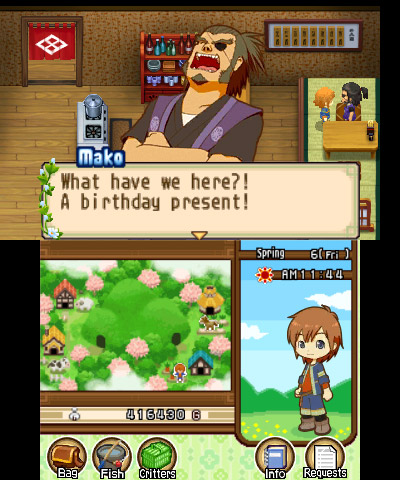 Developer Marvellous Interactive makes great use of the two 3DS screens. The touch screen gets used to keep track of information, such as what requests are currently active. All the farming action  gets displayed on the top screen. There’s also short-cuts for equipping items, such as food. It’s important to keep an eye on the character’s stamina bar, so that there is no risk to collapse, due to exhaustion. What matters is that the controls make it a lot easier to go about doing daily tasks.

Harvest Moon is an enjoyable experience that focuses on the rewarding aspects, that come from working on a farm. However, it’s a bit vague when it comes to giving the player goals. Some of the early tutorials are too lengthy to make sure that players will pay proper attention. Those that choose the farming town will find that it’s rather confusing to try to find supplies to grow produce.

Some other minor issues, such as the fact that progress is only saved when going to sleep, also make it less enjoyable. It’s easy to see why the target audience would like it though. Anyone not too bothered with getting results quickly will obviously overlook the small flaws.

Extreme 3D farming
As a 3D experience, Tale of Two Towns doesn’t particularly do anything special. It makes use of 3D effects to make smaller details like text stand out. Obviously this was originally a Nintendo DS video-game, so it makes sense that it wasn’t possible to take full advantage of the 3D capabilities. 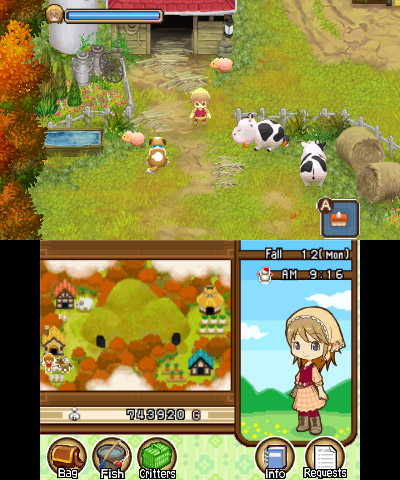 Give in to the farming addiction.

It’s not exactly the best looking title on the 3DS, but it is still a true Harvest Moon experience. It’s certainly nice to see the subtle animations, such as the way that flower petals move in the wind. The attention paid to details in farming, such as the way that vegetables slow grow is also impressive. It’s the sort of reason Harvest Moon is still appealing to so many people.

Farm musical
There isn’t much to say about the soundtrack for Tale of Two Towns. There’s only a couple of music tracks, but they are pleasant enough to not become obnoxious. Perhaps it’s the fact they are so relaxing, so that the player feels right at home.

Living the simple dream
Some would argue that Harvest Moon hasn’t changed that much over the years. That is possibly what makes it such a thrilling experience for the fans. It’s reassuring to see that some video-games still focus on the simpler pleasures of life. Harvest Moon 3D: The Tale of Two Towns is not a ground breaking experience, but it knows what the fans want, and will successfully get them hooked in this latest adventure.