Magic: The Gathering – Duels Of The Planeswalkers 2013

If you are anything like me, the idea of a card trading game fills you with about as much excitement as watching paint dry, and the idea of playing such a game on a console is like pairing Mary Poppins with Mr T: it just shouldn’t happen.

Naturally, this means I had absolutely no prior knowledge of the Magic: The Gathering series. I’ll be honest and say when I was asked to review Duels of the Planeswalkers, my first thought was one of questing across vast planes in a scaled down Action/RPG for XBLA. Obviously I was a little shocked when I first fired the game up, to find the latest release in a series I now know spans almost twenty years and is the most popular card trading game on the market, with over twelve million players.

Having overcome my initial shock and after spending a little time looking at the series’ history, the question is would I add myself to that number? Read on to find out.

The Magic series is set in a world known as the Multiverse where there are a number of separate Planes of Existence. These Planes are quite varied in their design, though most are spheres with suns and moons like our own planets. The only thing that completely links the Planes is Mana, an energy that fuels Magic.

Now, that’s magic
The single-player campaign has you facing a sequence of opponents in either a battle or an encounter. Both take the same format where each player is initially dealt seven cards which they can accept or trade in. Trading in means you are dealt a new hand but will have less cards, meaning you can initially keep trading down to get the hand you want at the risk of starting with just the one card in your deck. 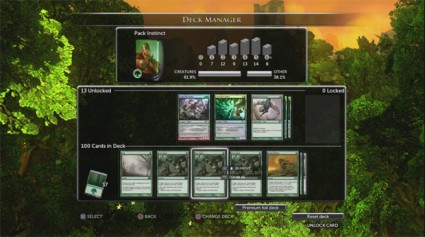 Look at all those beautiful cards!

Each player then takes turns to lay cards by selecting them with the Left Stick and pressing A, and attacking the opponent by choosing the cards to use in the same way and then pressing Y. Victory is gained by reducing your opponent’s life points to zero, or causing them to use all the cards in their Library before you do.

Cards follow one of five types: Land, Creature, Sorcery, Artifact and Instant, all of which have a very specific place and purpose. Land cards give you Mana, which is your currency used to lay attacking creature cards and cast spells. Artifact cards usually sit alongside creatures and boost their statistics, while Sorcery cards are used for a one-off spell against either your opponent or one of their creatures. Finally, Instant cards are exactly that: cards that can be played at any time, even outside of your turn.

Each turn has three phases, consisting of two Main phases either side of a Combat phase. The first Main phase is where you draw cards, and both Main phases can be used to place cards onto the Battlefield, assuming you have enough Mana. Within each turn you can lay as many cards as your Mana allows, but can only lay a single land card in any one turn.

Naturally, the Combat phase is where you get to try and do damage to your opponent; although, they can use their own creatures to block your attempts. After using any card it becomes Tapped, meaning it cannot be used until your next turn. Tapped creatures also can’t defend, leaving you open to attack. At the end of your turn, you can’t have more than seven cards; if you do, you’ll be asked to discard them.

At any time during play you can pause the turn timer with X to buy yourself a bit more thinking time, Zoom in on a card with either RT or LT to review the details of it, or use one of the bumper buttons for some extra information on that card. 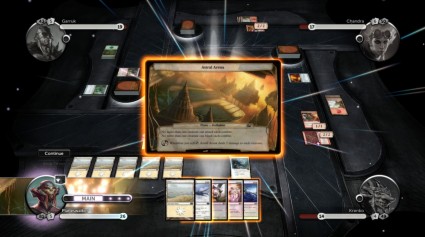 Take note; this is as shiny as the graphics get...

There are ten different card decks in DotP, which fit into one of the five main Mana Categories of Island, Plains, Forest, Swamp and Mountain. Each of these will require you to use a different strategy, as they have very different strengths and weaknesses. Throughout the campaign you’ll need to change regularly to effectively counter whatever your opponent throws at you.

Having beaten the main campaign you then open up the Revenge campaign, which gives you a second chance to face the opponents from the main campaign without the additional encounters, and with the difficulty ramped up a notch. Again, the style of these battles is very similar, with a single head-to-head game for each opponent.

There are two other single-player game types which are Challenge, a nice little quick-fix option where the game sets you a specific challenge to overcome, such as overturning a certain defeat; and Planechase, which is the biggest, and in my opinion, best game mode.

Planechase sees up to four opponents take to battle with the addition of Plane cards. These are used as the location of battle and represent one of the Planes in the Magic Universe. These Plane cards affect aspects of the game and work alongside a die, which can be thrown by each player on their turn at the cost of Mana. The die can lead to a change in Plane which triggers an ability of some description, or the Planes Chaos ability which is likely to give you a boost, hit your opponents or both. The Plane cards add an extra layer of strategy to the game and makes for an interesting twist that also increases the length of battles. 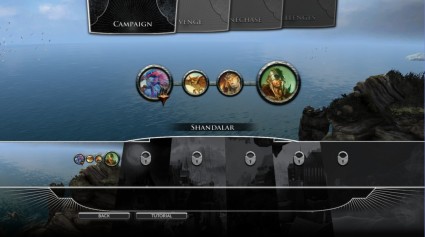 Plane to see
Naturally, a game that essentially revolves around each player taking turns to lay a card on the table doesn’t exactly blow you away in the visual stakes. Each match is played on a simple Black table with the deck of cards placed faced down, meaning that the only in-game animation comes from placing the cards and a small graphic when you attack.

In-between games and throughout the menus there are some beautifully drawn stills that introduce and familiarise you with the Magic universe, and the cards themselves also have a hand drawn effect. Unfortunately that’s about it.

Mana mia!
Sound is also very limited, with only a small collection of tracks that sit comfortably in the fantasy mould of pan pipes, string instruments and the odd symbol clash. The tutorial has a nice friendly voice-over, but overall DotP is a fairly quiet affair that gives you a perfect opportunity to listen to your favourite CD while playing the game.

Planechase me
All the same game modes are available in multiplayer as are in the single-player game, including the additional Two-headed Giant’ which is only available in a custom single-player game. This sees players team up in pairs where they share a life force of thirty at the start of a game. Each player keeps their own turns, but life is lost as a pair and this is the only mode where there is any element of teamwork. It pays to have complementary decks so that you can both attack and defend effectively. Planechase is again the best of the modes available due to the added strategy and complexity of the game, but the head-to-head battles work well against human opposition. 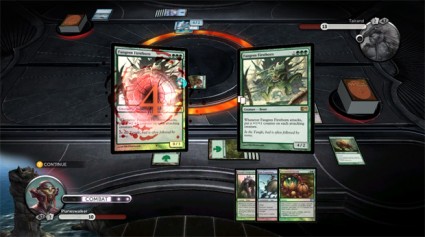 The downside is the time it can take to create a game, especially when setting up for more than two players. Standard Quick Matches come in the usual ranked and unranked form, and can take several searches before you find an opponent, followed by a delay before the game can actually start. I also experienced a few occasions where having finally got a match, the game seemed to disconnect before it started, leaving me back at square one.

If you think this sounds frustrating, it is; but it’s nothing compared to trying to get four players joined into a game for a Planechase match. One night took me thirty minutes to start! What makes it even worse is that after a game, rather than going back to the multiplayer lobbies or the game setup screen you are dumped all the way back at the main menu, making the process even longer than necessary. I found this to be an unwelcome and unnecessary disruption which will put some off of what could be a really good multiplayer option.

Abracadabra!
I have to admit, despite my misgivings, Duels of the Planeswalkers is actually an enjoyable gaming experience. The single-player campaign has a fair bit of depth, and across the different game modes there’s a nice sprinkling of variety. In addition the multiplayer, despite its matchmaking trials, is very enjoyable and offers a relaxed alternative to the usual shooters.

I was pleasantly surprised by the depth, and though I’m far from a total convert I urge you not to dismiss DotP without at least giving it a try.