You know how it is: Your best friend lets you know about an all night drinking sesh on a remote island, you agree, bring along some friends and a new step-brother, and of course think it will be a barrel of laughs. Then you get to the island and realize not all is what it seems, and those spooky caves feel spooky for a reason…

This is the basic setup of Oxenfree, the first game from developer Night School. It’s a heavily scripted side-scrolling adventure, with some decision-making thrown in and a good dose of artistic expression and atmosphere. It doesn’t always get it right, but as a first game for Night School, Oxenfree is a great start.

You play as Alex, a teenage girl led to Edward’s Island by her best friend Ren. Along for the ride are Jonas, Nona and Clarissa. They are all young and just want to party the night away. Unfortunately, heading into some caves creates a supernatural problem the kids have to solve.

I am trying to be vague here because discovering exactly what is going on is the entire point of the game, and I want to let you make that discovery on your own. Needless to say, things get very strange for the group very quickly, and keep getting stranger.

The interactions of Alex with the rest of group form much of the narrative, and unfortunately it’s here that Oxenfree breaks down. The writing is good enough that you know each person had a life before the events depicted in the game, each had events happen that form the person they are at the start of the game and it feels like each one has always existed, you have just happened to stumble upon their story. 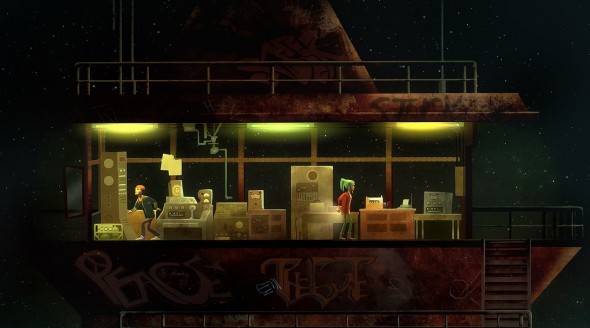 Just what is going on on Edward’s Island?

Where Oxenfree fails is that it gives you dialog choices for Alex based on what the other characters are saying, but each gives a slightly different tone to her voice and ultimately gives her a somewhat disjointed personality. Sure, you can get around this problem by always picking the same option (three pop at a time, left, middle, right), but that might not feel right for the question, and you are thrown out of the roleplay that Oxenfree is trying to setup.

This is compounded by the fact that characters remember certain choices you make, Telltale’s The Walking Dead style. You might be nice one time and horrible the next, but the characters don’t seem to react particularly naturally, apart from Ren in one case, but you only see the results of that at the end of the game.

It’s a strange combination of good writing and poor editing. It doesn’t completely cripple the game, as Oxenfree is still good, but I can’t help but feel keeping Alex’s story straight and removing these choices would have made for a better narrative. Still, the voice acting is so top notch that you can be drawn into the world regardless.

Oxenfree isn’t super long, I beat it in just over five hours, and this is both good and bad. It’s good because it doesn’t overstay its welcome and pad itself with irritating missions or a ton of collectibles/map markers, but bad because the pacing feels slightly off; all of a sudden you’re at the end with what feels like no real solution to the supernatural problem at hand. The last hour just feels super rushed, but I couldn’t work out if a little bit more storytelling was required or slightly better editing.

I do know that I didn’t feel totally satisfied by the ending, and though there are multiple ones, I felt like the designers were torn between wanting to offer something more and having players simply go through multiple times. 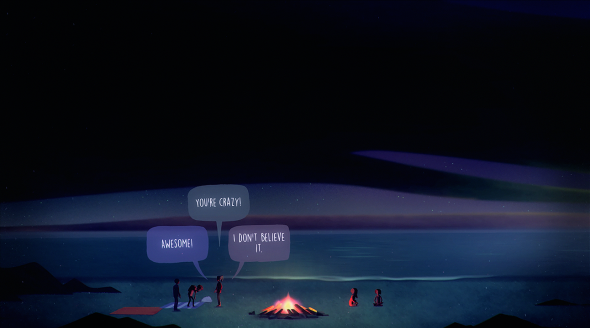 Not all responses are created equal…

Had a new game+ option been available, I would have been more inclined to start over and play longer, but as it stands, it likely won’t be launched again.

I had only two other issues. The controls and the walk speed. The controls are set so that the cursor keys move Alex, Space is the contextual action button, Ctrl brings up the map and Shift brings up a radio tuner. This is a perfectly fine, but in order to select a dialog option when they appear, you have to move your hand to the mouse to select one and click. When you are climbing down a hill or doing something else this can be annoying. It’s a little thing, and your feelings on it might be different, but I found it vexing.

As for the walk speed, even when running (only when the game deems that it’s okay), Alex moves extremely slow. I feel like this was a deliberate move to add tension, but it only makes the act of playing laborious. It’s not so slow that doing anything becomes a chore, but in the situation presented, it would seem like teenagers would be moving with a touch more haste.

To be fair, Oxenfree doesn’t feel scary at all, and is more a thriller than a horror. There are a couple of moments where I noticed something out of the corner of my eye, but no jump scares or any atmosphere of dread is created, so you just end up wanting to see what happens. 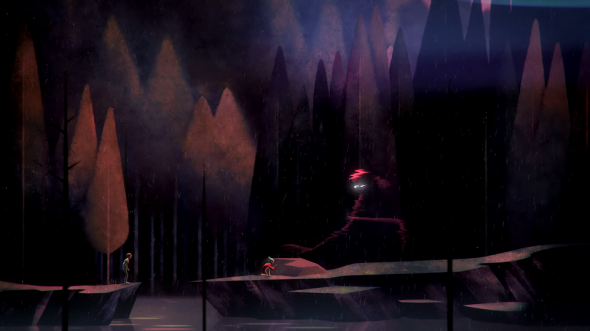 Do you see it?

Visually the game does a lot with little, and again presents a island that has been there for years and will continue to be there for years after. It is simply present, and while some textures get reused a little too often, it’s not so bad that each area feels exactly the same, and with some tricks to infuse that supernatural element, Oxenfree can be a visual treat.

But still not scary?

It’s not scary at all. I would be hard pushed to find anyone who would think it’s scary, even pre-teen kids would have seen scarier stuff on TV.

It is however, a good game. The writing is really great and the voice acting enhances it to present you with a group of people who lead natural lives but are thrust into a supernatural situation. The branching story stuff might fall flat, but if you have a few hours to kill then Oxenfree is certainly worth your time.