There are certain aspects of a game that developers have to nail. Of course, what that aspect is depends on the type of game they are creating, but each has certain things that must be done well for it to work. In the case of fast-paced puzzle games, it’s the controls that must be nailed for it to be truly effective.

Pix the Cat is such a fast-paced puzzle game, but unfortunately the controls let it down. Having played it across PC and PS4 with two different controllers and a keyboard, it is a fundamental problem, seeing what could have been great remain merely okay.

Pix the Cat takes obvious inspiration from the likes of newer Pac-Man games, and has you manoeuvring Pix around a bright and colourful board, picking up eggs that hatch and become ducklings. The ducklings follow Pix until you can get them into the portals dotted around the level, and getting all of them into a portal in as quick a time as possible is your goal. 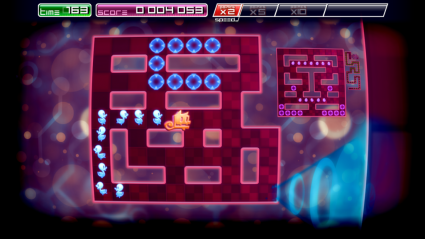 Pretty sure cats do the opposite of this…

Some levels require quick fingers to navigate, as you need to avoid the walls and try not to hit the ever-growing tail of ducklings you create. Early on, this isn’t so bad, but as you complete more stages, Pix gets faster and the whole thing ramps up, and this where the controls fail and frustration sets in.

It’s not that they don’t work at all, but the only effective control method I found was the keyboard, because playing with a wired 360 controller or the DualShock 4 proved almost impossible in the more intricate levels, never letting me score enough points to progress and unlock new levels.

This includes trying to play on the controllers with the D-pad; it just wasn’t as effective as using the directional buttons on keyboard, and I had much more fun with Pix the Cat once I played solely on the PC with this method. That came with its own issue though, as it kept crashing to desktop on me at the same point every time.

The core gameplay, however, is undoubtedly fun, and as the speed ramps up and more pressure is piled on, it gets tough to work out an effective path around the level, leading to that inevitable mistake. The problem is that the best games of this type do not feel like they have failed you in some capacity; they make it seem like it is your fault, every single time.

That is the mark of a good puzzle game. You made the mistake, you failed and you want to get better so you play more. Here I couldn’t help but feel I made the right control decision – the game just didn’t do it. That creates frustration, which ultimately brings things down. 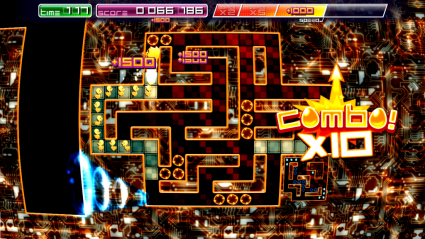 Even cats must chase combos.

Do the controls really do that much damage?

Yes. In all other respects, Pix the Cat is a solid puzzle game. It is great for quick plays and would be even better as a portable game for those long commutes. There is a Vita version available, of course.

The control issues I had are simply too prevalent to ignore though, and getting frustrated while trying to go for a high score isn’t the mark of a good puzzler. Such things might not bug you as much as they did me, but getting annoyed while trying to unlock more of a game I want to play just isn’t fun, and that is Pix the Cat’s biggest failure.