Back in 2009, when Activision were still largely talked of as the darlings of the current generation console owner and COD was still hailed as a fairly innovative franchise, developer Radical Entertainment produced Prototype, a sandbox game with a difference. Instead of moody Eastern Europeans, car theft and an abundance of firearms, we were given super powers and a plot rammed to the brim with conspiracy theories and double-crosses.

Roll the clock forward three years and much has changed in the world of video-games. Activision are now often criticised, and amidst a wealth of AAA titles the likes of which we once could only dream of, even COD, the game of all games, gains critics quicker than a turd gains flies. What hasn’t changed is that Radical Entertainment still falls under the ever-growing umbrella of Activision. They know how to do conspiracy and intrigue too, as Prototype 2 takes everything its predecessor taught it and ramps it up a notch.

Due to the nature of Prototype 2’s twisted plot I won’t go into too much detail here for risk of spoilers, but the game follows on from the plot of the original nicely. The player takes the role of Sergeant James Heller, whose wife and daughter fell victim to the virus, and who is hell-bent on finding the person responsible to gain revenge.

Sergeant Heller gets himself assigned to the Red Zone in order to track down the origins of the virus, in what is likely to be a suicide mission. Rather than be killed, however, Heller becomes infected himself by the protagonist from Prototype, Alex Mercer. Heller is then captured by Gentek, a biological and genetic research company, and used as a test subject. Unfortunately for the scientists doing the probing, Heller evolves into something of a super human and destroys the facility during his escape. This leaves Gentek and Blackwatch, an elite Special Forces detail, desperately trying to find and kill him. 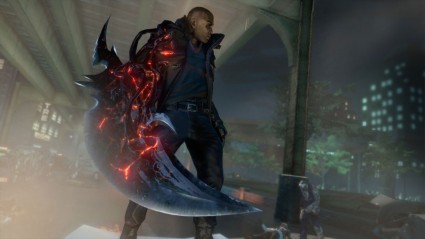 Who asked for a tin opener?

What follows is a story packed to the rafters with conspiracies and double-crosses, as Heller tries to unravel the hierarchy of these two factions in order to find out who is ultimately responsible for the outbreak of the virus and the death of his family.

Final product
Outwardly, Prototype 2 follows the typical sandbox style, with the main story missions supplemented by a selection of side quests which are used to develop Heller’s skills. These side quests are further broken down into Collectibles, Blackwatch and Radnet tasks which all have their own further sub-variations, giving the impression of a vast and varied game which offers the player many different options to satisfy any play style. In reality though, most of these quests follow a fairly similar routine of travel to a location, consume a target, travel to another location and destroy, making it more of a slash-em-up with the odd change in pace.

Heller can be armed with two of his available weapons (which are earned rather than purchased as they were in the original), and these are assigned to the X and Y buttons. Once you have more than two available, you can pick which weapons you want by holding LB to open a wheel which displays each one and rotating to your favourite. You then assign it the appropriate button so you can quickly arm your weapons with a tap of the same button. RB is used as your shield once obtained, while A is used to jump or dodge when in combat. B is used to grab and throw as well as to consume your enemies once they are weak enough.

Consuming is a three-pronged concept. It is an attacking finishing move, a defensive option which restores health and allows Heller to shape shift into his last consumed target allowing him to easily evade his attackers, and is also used as a way of progressing the story. Once a target is consumed Heller can see their memories and take their form to access secure locations. During general play you can consume targets silently by sneaking up behind them and tapping B, which opens an additional group of options that puts consume on the Y button alongside throw, with another tap of B and the new Bio-bomb on X. 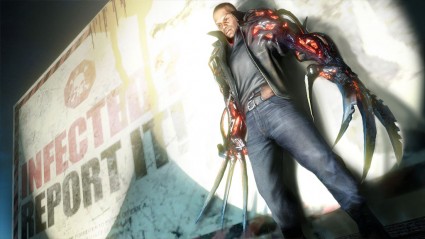 Nothing if not inconspicuous

Bio-Bomb injects your victim with a strand of the virus that basically makes them explode, and is a very effective smart bomb style weapon. Both the Bio-Bomb and consume options can be done in an open, in-your-face fashion or whilst maintaining your cover if the target is not being watched.

Finally, as a superhuman, Heller has the ability to reach incredible speeds by holding down RT letting him run up buildings, which coupled with a jump will allow him to glide around the city. As your skills develop you can air dash with A up to three times, and when you put this and the glide function together you can almost challenge Superman for flight.

All these abilities are much quicker to perform than they sound and switching between different weapons and abilities very quickly becomes second nature. It is in this fluidity of control that Prototype 2 takes its biggest plaudits. It’s a smooth, action packed experience that mixes some strong gameplay with arguably the best superhero experience on consoles.

Concept art
Anyone who played the original will feel very much at home with Prototype 2 visually. Not only does the story continue in New York, but the same graphical style is used throughout. Prototype 2 is a colourful game but particular interest is paid to one colour, red, which is utilised as something of a beacon to highlight the infected and evolved. It’s given an even greater emphasis in the cut scenes that are, by and large, black and white. 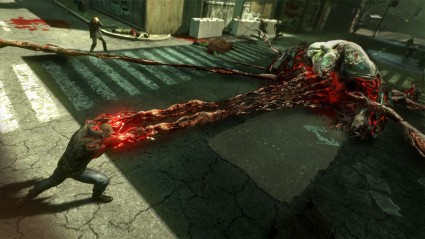 It's not the size that counts

The game world as a whole is very well drawn, and again, small details really stand out. As you progress through the game from the Warning Only Green Zone to the Seriously Avoid Red Zone the buildings are in a proportionate state of disrepair. Vehicles lie abandoned and destroyed at the roadside, victims of the larger infected creatures.

The animations of characters are also very good, with the Army and Blackwatch troopers running through the streets firing off bullets, grenades or rockets, contrasting to the general shuffling of the infected and the sheer brute force of some of the larger enemies. On another tangent, the evolved blend a touch of both with the fluidity and dexterity expected of the super humans they’ve become.

On a negative, there have been occasions during my play through when the camera has got a little lost in battle, leaving me hidden from sight. I have also noticed some minor drops in frame rate on a handful of occasions. In addition to this, I have to be honest and say that visually there is no real step forward from the original which is now three years old.

Sound test
As with the visuals the audio follows on from the original, with the same moody atmosphere being joined by many returning effects. Weapons, useable vehicles and base defences all sound very familiar from Prototype; as do the returning infected. This is as much a positive as a negative, with the familiarity it brings being weighed against the feeling that we haven’t really moved on technically from the original. 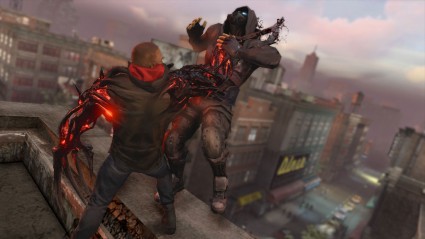 Prototype gives a whole new meaning to "inside information"

Having said that, the voice acting is absolutely spot on, with each character well cast and delivering performances that bring the relevant emotion to the fore. Heller himself is portrayed brilliant as a brooding soldier hell-bent on revenge, but there are certain sections where the caring parent comes out and his turmoil is evident in his voice.

Outside of the almost continuous gunfights of the missions and the more upbeat tunes of the events, free roam gives you and the audio a touch of downtime with a calm air of quiet being punctured only by the flickering fires left from the carnage.

Ready for consumption
Yes, a lot of the side quests and story missions are quite similar and no, the game hasn’t really moved on from the original. That said, Prototype 2 is still a thoroughly enjoyable game that is incredibly difficult to put down once you’ve started. It also immediately welcomes you back for a second playthrough once complete, and thanks to a handy little recap available in the main menu, even if you never played the first one you should: