Rayman is one of those game franchises that anyone over a certain age will have some sort of history with. The original, back on Sony’s Playstation in 1991, was something of a breath of fresh air at the time and looked to take on the giants of Sonic and Mario head on.

Like its contemporaries, the Rayman franchise has given us a loveable lead character, a somewhat inferior yet humorous sidekick and a wealth of colourful, enjoyable games across multiple generations. However, unlike the other big franchises, Rayman’s iterations have been somewhat irregular in release, with the third part coming a full eight years after the original.

With the recent success of Rayman Origins, Ubisoft have seen fit to give Rayman 3 the HD makeover for XBLA and PSN. Priced at 800MP, I have been looking at whether it was worth the effort and if it still stands up in today’s market.

Rayman 3 HD revisits the Hoodlum Havoc game and sees our limbless hero battling an army of black lums, led by Andre. One night Andre transforms a number of Red Lums into Black Lums to join him, and together they gather hair from various creatures that let them dress up as “Hoodlums”. This allows Andre to pursue his goal of effectively painting the world black with more and more hoodlums.

Naturally, Rayman has his own ideas about that and looks to stand against this evil army, with his trusty sidekick Globox in tow. Then Globox accidentally swallows Andre, who looks to poison Rayman’s friend from the inside with plum juice, which Globox is allergic to. 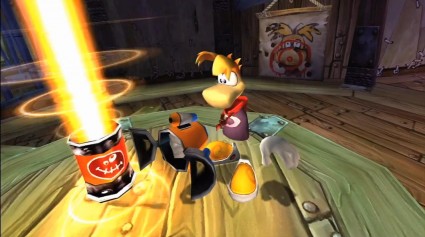 You take control of Rayman in this rather wacky scenario, as you go off in search of a suitable doctor to relieve your dumb blue buddy of his rather unwanted squatter. Along the way Globox is treated by Otto Psi, Romeo Patti and Art Rytus (honestly, who writes this stuff?).

Hoodlum hope
In many ways Rayman 3 is a by-the-numbers, old-school platformer which sees you jump around colourful landscapes collecting gems in a bid to build a good score. Yet to say that’s all it is, is something of a disservice.

The main aim is to score points by killing enemies and collecting gems, which are scattered across the levels both high and low. In order to do this you will move with the left trigger and jump with A. As with all Rayman games you can use the helicopter glide by pressing the A button while in the air. Instead of the traditional bottom-bounce, Rayman has the ability to punch with a press of the X button which sees his armless hands go flying into the target. You can lock onto the target by holding RT; couple this with pressing left or right and you can shoot round objects. This is excellent in theory, but in practice I have found that more often than not the camera can change angle suddenly, leaving you shooting at thin air while you get shot in the back.

With every kill or pick-up your score meter grows and a combo meter also pops up, meaning the next one is worth more to you. Naturally you need to try and keep the combo meter going as long as possible to get the big scores and as Brucey says: “Points make prizes!”. In the main game mode at various point targets a bonus level is unlocked, which takes the form of a rainbow level. This sees you hover skating along luminous pipes collecting gems to a backdrop of a jazzy trance kind of tune. Trust me, you don’t want to do this drunk! 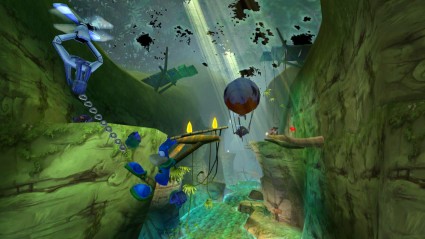 Swing when you're winning!

The other big part of R3HD is, as ever, freeing Teensies from their cages. There are plenty to find across the nine worlds, some of which will be in places almost impossible to miss while others may be at the end of a little puzzle scenario or in places you have to work hard to reach. The puzzle elements mostly require one of Rayman’s power ups and here lies the unique feature of Rayman 3; on clearing an area of enemies or freeing a caged Teensie you will be rewarded with a coloured tin. This gives Rayman a special suit, which brings with it a special power. This might be an extra powerful punch to break through selected areas of scenery, or a grappling hook to access floating rings and reach otherwise unreachable platforms, to name just a couple.

The puzzle side of things adds a spark of variety and an additional challenge to what is, really, a fairly simple game. However, things are made infinitely more challenging by the dodgy camera which will regularly make you miss your target and, as the power ups are only good for a limited time, can leave you retracing a particular area over and over as you play pot luck with it.

As you progress through the game you will also unlock arcade bonus games; all fairly short little games that simply add an additional replay option. Some of these are relatively good fun but can be quite frustrating. The tennis game for example drove me nuts, as the collision detection seems a little hit-and-miss, making winning points almost impossible. 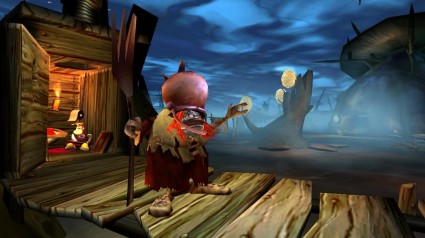 I-lum-inated
Considering Rayman 3 was first released back in 2003, it still looks pretty good. The HD makeover suits our limbless hero, bringing a new depth of colour to the game. Rayman himself is wonderfully animated with some lovely touches (particularly when left idle) that will put a smile on your face. The levels are quite varied and some of the vistas look absolutely stunning, while the game is bright and colourful throughout.

Naturally as a remake of one of the early 3D platformers, there are more than a few moments of camera frustration as I have already alluded to. These can hamper your progress momentarily and cause a touch of rage if you let it get to you. Nonetheless, Rayman 3 HD is a fluid, beautiful game that looks as good as a lot of more modern titles.

Havoc metal
Unlike most games, Rayman 3 does not sport a continuous soundtrack, instead saving it for moments of more significance or intense action. At these times, what I would call a fairly stereotypical platform backdrop is given. This will alter ever so slightly dependent on the level, but it is generally a fairly non-descript tune. This is the complete opposite to the Rainbow bonus levels where a fairly upbeat disco or jazz style tune plays throughout. 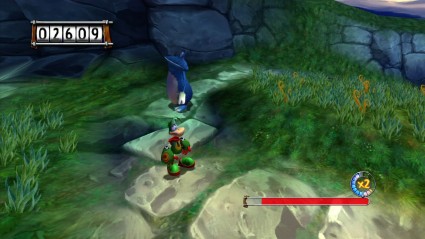 Hey Globox, check out my Kermit the Frog outfit.

Sound effects on the whole are very good for a game of this age and have ported well, with some fairly solid voice acting that follows what is often a humorous script. There is a wealth of sounds in the backdrop, from birds that fly over head to the caged Teensies calling for help. The effects are all very clear and well executed, if a little dated by today’s standards.

A Teensie bit of fun
Rayman 3 is an enjoyable romp down memory lane that mixes puzzling with platforms in a bright colourful package. Unfortunately, while the HD makeover has enhanced the visuals it has done absolutely nothing for the infuriating camera that regularly tarnishes the game, causing deaths and struggles that you have absolutely no control over.

If you can get past this, there is some fun to be had that will keep you going in between deathmatches or gold Ultimate Team packs. At 800MP, you will do well to find a better platformer on XBLA.