Even though it’s one of the classic game types, I must admit I’ve never been a huge fan of shoot ‘em ups. I’ve dipped in and out of the odd classic, going all the way back to Space Invaders, Xenon II,and  R-Type through to much more recent fare such as Super Stardust HD and Sine Mora, but while I’ve gotten a brief buzz from shooting everything in sight, I’ve found that I’ve not been too bothered about going back for more.

So when Resogun was announced for PS4, even though I was confident Housemarque would craft something great I wasn’t sure it was an experience I would greatly enjoy. It turns out that on this occasion though, Housemarque actually have me completely hooked.

Resogun effectively plays out in 2D; however, it’s cleverly designed so that you move round each world in a loop. In this sense it’s perhaps less complicated than Super Stardust; especially considering that you can only shoot left or right, and can’t shoot at any angle you choose here. If that sounds a little restrictive, you also have a boost that will destroy enemies as well as propelling you through the environment, a limited number of bombs that destroy pretty much everything, and an overdrive meter that can be filled by collecting green dots left behind by enemies you’ve already destroyed. When unleashed this acts like a massive beam that quickly decimates enemies, although it only lasts for a brief time so must be timed carefully if you’re to make the most of it.

I say make the most of it, and this boils down to two different things depending on how good you are. If like me, you’re fairly rubbish, you’ll use the likes of overdrive and bombs as a defensive tactic to get you out of a sticky situation; however, as with most games of this ilk, if you’re good enough you’ll want to use them to score as highly as possible which will see you using these attacks to ensure that your multiplier keeps climbing. 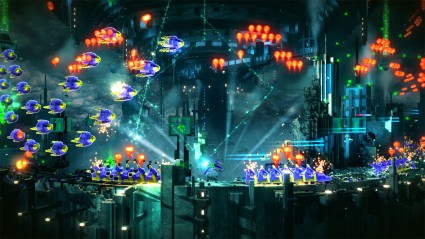 Housemarque have introduced a couple of clever systems in Resogun to force you into certain tactics if you want to get the most out of it; “the most” being an insanely high score into the hundreds of millions. First off is the multiplier system. How high this goes is directly linked to the difficulty level, and you have to keep shooting to increase the multiplier. Leave it too long without blasting anything and you’re back to 1x and have to start building it back up again. Secondly, rather than this just being about shooting everything on sight, at the start of each level (of which there are five), you are told to rescue the last humans. You don’t have to do this to complete the level, but not only does having this in there break up the shooting slightly (although rescuing them of course involves some shooting), rescuing a human is another way to extend that score multiplier.

Beyond these systems, much is as you would expect. You can power up your weapons and ship as you progress in order to dispatch enemies more quickly, and it’s all about destroying everything as quickly as possible whilst dodging enemy fire, and the enemies themselves. 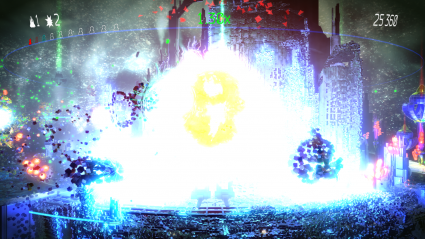 BOOM! Unleashing a bomb is satisfying, and looks awesome

This is no re-invention of the wheel but it does make for an utterly compelling experience, and even though I’m generally not all that driven by online leaderboards, I keep coming back for more. I can’t understate the importance of the humans and the multiplier mechanic; I want to rescue all of the former despite the odd snarky comment from them (“About time?!” Let’s see how sarcastic you are when you’ve been dropped in lava, buddy), and I want to hit those crazy multipliers that allow me to score in the many millions.

Thanks to Resogun playing at 1080p, 60fps (seemingly the expectation for most next-gen games), it’s extremely smooth to play. This is the shoot ‘em up equivalent of a pair of silk boxers; it looks shiny and feels great too. Yes I did just compare it to underwear; I’m very sorry… moving on. It looks incredibly pretty, although I can’t help but wonder if the older consoles could still have played this quite comfortably as well. I don’t want to detract from the visuals here too much though; either way, it plays out as a stunning pyrotechnic light show. The end of each level in particular is quite spectacular, and wouldn’t look out of place in London on New Year’s Eve.

If I was to level any criticism at Resogun, it would be that it’s not huge. You only get five levels, so longevity here is much more about getting the high scores, rescuing all the humans and progressing through the difficulty levels. Fortunately the “one more go” factor here is extremely high, and so despite not being bigger I find myself returning to it time and again. It’s also easy to just pick up for a quick blast, or to spend longer with should you so wish. DLC is apparently on the way as well, so hopefully before long there’ll be more content out there to extend the experience.

Resogun doesn’t do anything particularly radical in the shooter arena. What it does, however, is take that formula and make an utterly solid and compelling experience, with clever twists that separate it from the masses in a positive way.

This is all wrapped up in gorgeous visuals, making the overall package the standout exclusive PS4 title to have in this launch period.