I don’t mind admitting that as a younger man I was a huge Sega fanboy. I am also happy to state that arcade racer Crazy Taxi was one of my favourite games back in the day and I did spend a fair bit at the arcades trying to master it. Suffice to say when I first heard it was coming to XBLA I was more than a touch excited and was very quick to nominate myself for the review.

Crazy Taxi also now happens to be available on PSN and at 800MP or $9.99. The question is does this port of one of Sega’s classic titles warrant a purchase or should it be consigned to the Arcade Graveyard? Read on to find out.

The general idea of the game is to pick up as many fares as possible and earn cash by taking them to their chosen destination within a set time limit. Extra cash can be earned by pulling off stunts and having near misses with other vehicles and when your time runs out you receive a grade depending on your performance. Fares are graded as Red, Amber, Green and Gold with Red being the easiest and Gold the toughest in terms of destination.

RT works as your accelerator and LT brake. Y activates your horn and X brings up the destination for your current fare. Your gears are on the A and B buttons and consist of just reverse and forward respectively. Stunts, drifts and boosts can be performed by rapidly switching between Reverse and Forward gears while in motion and will be needed if you are to get anywhere near a Grade A performance. 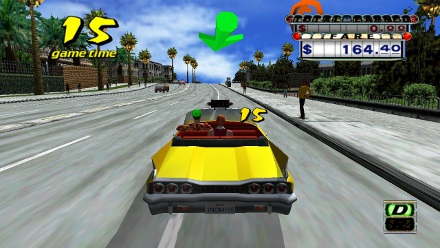 Mind that big arrow doesn't fall on your head

Hackney carriages
You have three options from the main menu; Arcade mode, Original mode and Crazy Box mode. Both Arcade and Original give you an option of setting a specific time limit of three, five or ten minutes or playing by the original arcade rules. This will see you begin with fifty seconds on the clock and your time will be reset with every pickup and drop off. On the face of it the game plays out in the same fashion regardless which of these two modes you choose. The rules, the map, even the fares appear to be exactly the same. In fact, I have to be honest here and say it took me a while to notice the subtle differences in the two cities as in truth there is very little between them and the fares play out much the same regardless.

At the start of both Arcade and Original mode you have a choice of four characters each with their own unique vehicle. Again I have to be honest here and say that it will take you a while to notice the very minor differences between them meaning your choice is more aesthetic than anything else.

Crazy Box gives you a completely different gaming option with a selection of mini-games to complete; these consist of jumps, stunts and tasks that range from a simple fare drop off to a game of bowling and a mad balloon bursting game that has you tearing around a field. There is also a great level where you have a track of jumps to complete in order to get your fare to his drop off point in time. It’s a nice change of pace to the other modes but is the only one which doesn’t allow you to choose your character. 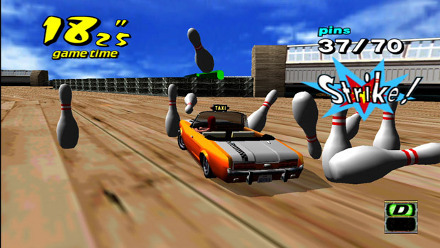 Crazy Taxi does not have any multiplayer modes to speak of, but you can post your times to Live leaderboards and compare your times to those of your friends if you are of a competitive nature. 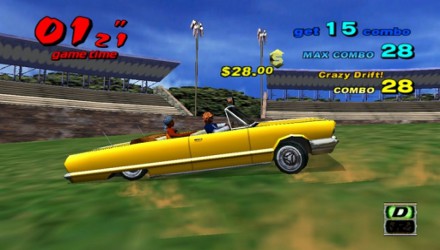 Now that's what I call "losing your back end"

Yellow cab
The XBLA version of Crazy Taxi is basically a direct port of the Dreamcast and arcade versions. On the plus side this means lots of bright, vibrant colours. On the downside though the screen tear is atrocious; your car will literally go through the scenery at times often dropping into the concrete when landing a jump. You will find, having dropped off a fare you can then drive through them without doing any damage and there have been more than a few occasions where I have been stuck in a wall. It’s a shame because it wouldn’t have taken a great deal of work to update the graphics a touch and the gameplay would have benefitted massively from a bit of TLC in this department.

Jo Le Taxi
There is a fairly standard, high adrenaline soundtrack to Crazy Taxi, by which I mean guitar rock. As with the graphics, the quality of the sound is far from great, with the background music often sounding a little bit muffled. The voice-overs are the same as ever with a rather annoying commentator repeatedly telling you that “You’re Crazy” or telling you to hurry up. Strangely I think I used to find it quite funny in the original version but now I just turn the sound off. 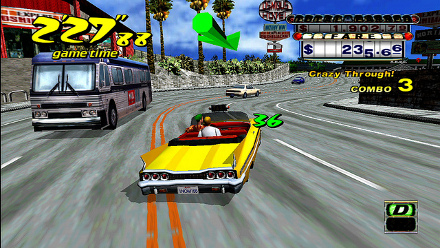 Taxi for Sega
I would be lying if I said I wasn’t hugely disappointed with this port of Crazy Taxi. Graphically it’s nothing short of ugly and though I have never been one to rely on the appearance of a title, on this occasion it makes a massive difference as it affects the collision detection and often a simple clip to your side can send you into a wall you can’t get out of. The two main modes have next to nothing between them which just highlights the lack of a multiplayer option and the four cars handle almost identically.

Either I’m so old my memory has gone funny or this is just a very bad port of a classic game because I found it difficult to keep playing enough to even finish this review. As good a game as Crazy Taxi once was, on this evidence it should have been left in the Sega back-catalogue and I am sorry to have to dish out my first ever…