Review: Dizzy: Prince of the Yolkfolk

Gamers have a ton of respect for their history. No matter which format they started out on, or whether they’re a fanboy of a particular brand or not, everyone has their heritage, and thinks very favourably of it.

Mine harkens back to the days of the Commodore 64, and to a little white egg with boxing gloves called Dizzy. I spent many hours solving puzzles with my peculiar oval buddy, as we traipsed the land of Yolkfolk in search of riches and princesses.

It’s been years since then, and while many games have come and gone, Dizzy has remained a constant, beloved memory of mine. I’d almost given up hope that I’d ever see him again. That is until three weeks ago, when Codemasters scrambled my brains by rebooting the hard-boiled hero. For a moment, I was on top of the world.

However, now that it’s had a chance to sink in, and our adventures together can finally continue, I face a daunting question. Were they actually worth the wait?

Prince of the Yolkfolk was a surprising first choice to reboot the Dizzy franchise. It’s by no means my favourite, nor is it the first game in the series (that belongs to Dizzy: The Ultimate Cartoon Adventure). That’s not to say it’s a bad game; it’s not, but when you consider classics like Treasure Island, Fantasy Land, Fantastic and Magic Land Dizzy are more fondly thought of, it does make you wonder what prompted Codemasters’ decision.

Regardless, Dizzy’s sixth adventure sees him and Daisy making a cherry pie for old Grand Dizzy who is a bit down in the dumps. Daisy thought she had a stash of cherries in her cupboard (which is generally where cherries are found, of course), but it seems they’ve been stolen by Pogie the Fluffle (don’t ask…). What was it about using food as a major plot point in older games?

Enraged, Daisy chases Pogie into an Enchanted Forest. Unfortunately, it’s not long before she loses his trail, and so Dizzy and Daisy decide to just look for cherries to finish their pie. However, as they start searching, they find an enchanted castle hidden deep within the thickets. Wondering whether Pogie got lost inside, the eggs decide to enter. The castle seems long-deserted, save for a magic spindle conveniently stashed in a corner. Intrigued (and clearly not a reader of fables) Daisy touches it, pricking her finger.

This, unsurprisingly, sends her into a deep sleep (where have I heard this one before?). Dizzy tries to wake her, but she won’t respond. Scared, he tries to leave the castle to look for help, but, instead, finds a club upside the head from Rockwart the Troll. The troll imprisons Dizzy underground, leaving Daisy alone in the Enchanted Castle, sleeping peacefully. 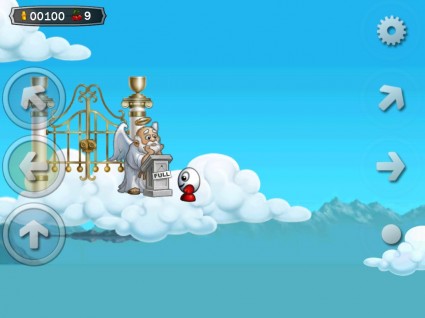 Ironically, my issues with this version of Yolkfolk stem from how Codemasters have simplified the experience, as opposed to remaining true to the Oliver Twin’s original vision. When playing the game, you receive hints throughout, telling you where to go and what to do. Sure, when you communicate with people in the game, they do hint at their desires, but they never fully spell it out for you.

The game also has save points, meaning you can now save your progress in the game, and pick up where you left off every time you play. Now, while you may think this is a strange criticism to make, Dizzy always prided itself as a game which forced you to do it all in one-take. If you couldn’t handle it, you’d better be good at remembering what you did, because you’ll be starting from the beginning again when you pick it up next time.

To further add to my frustrations, Dizzy has now been blessed with infinite lives. No matter how many times you kill Dizzy, he’ll just spring back up as if nothing happened. In the original games, Dizzy had three lives (with the opportunity to earn more). Not so, this time.

The final nail in the coffin is that Dizzy can now speed-walk through the level. Again, for most of you, this will seem a strange criticism (and you’re probably thinking it is coming from a toothless old biddy who still fantasises about the good old days) but this just seems like an unnecessary addition, and just makes the games length zoom by even faster.

My theory? Codemasters have simplified the Dizzy experience because they’re scared today’s gamer won’t be able to handle it in its original state. Even if that wasn’t the intention, that’s exactly how it feels. As a result, this makes an already short game (you can whizz through this in about 30 minutes from start to finish) even shorter. Dizzy was never designed to be this accessible, but because it has been simplified so much, things are much easier than they should be.

The good things to say about this remake are that the touch screen controls actually work quite well (except when you want to pick something up or interact with a character). It’s very easy to navigate Dizzy throughout the world with arrows on either side of the screen, and it never feels like a chore. It’s also a great mix of platforming and adventuring, which is what has made the series such a firm favourite of mine. 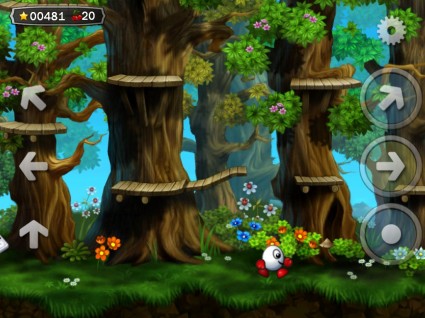 It's not eggsactly as you'll remember it...

Eggsceedingly good
The good news is Dizzy has never looked better. Even though the game is still a 2D Side Scroller, the graphics have really benefitted from a brand new lick of paint. The world of Yolkfolk is beautiful with wonderous forests and enchanted castles, and there’s a real ensemble of characters on hand with varying problems. A lion with a thorn in his paw, a bard who needs his harp, even Death makes an appearance.

Stereggscopic sound
The music is a very fitting homage to the original game, but makes use of modern sounds. The symphonies are very relaxing and calming, but also very upbeat. Yolkfolk is never sickeningly cute, but it’s definitely guilty of helping you slip into a pleasant mood. 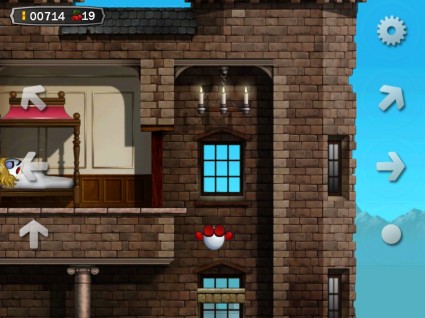 I think Dizzy might be about to get scrambled...

Eggstraordinary?
At £1.49, this is hard not to recommend. Despite my earlier misgivings, the source material is intact, and is still very enjoyable to play through. It’s just a shame Codemasters have ‘dumbed-down’ the experience. Fortunately, due to the surge in popularity, I doubt this is the last time we will see Dizzy, but, unfortunately, I expect Codemasters will continue to use this formula. For iOS, a game this size is acceptable, but if Codemasters ever have machinations of bringing this to Xbox or other consoles, I’m not sure if this would present enough value for money, even at 400 MS Points.

It’s great to have Dizzy back, it really is. I just wish Codemasters hadn’t tampered with the formula so much. He’s still the same hard-boiled egg, but sadly with a few cracks in his shell.