It is fair to say I am football mad. In fact I would go as far to say it borders on an obsession. So when the review code came into TIMJ HQ for Football Genius: The Ultimate Quiz I was quickly nominated as the man for the job and was more than happy to oblige.

With the World Cup in full swing and following a recent price drop (originally priced at 800MP last year), we felt it was a good time to give you a run down on the game while it is currently available on XBLA for just 400MP.

So, baring in mind that this is a bit of a topical review, you probably won’t be surprised to hear that this is a quiz game about football. Now we have stated the obvious is it actually any good?

The Single player mode, it has to be said, is fairly limited. Your Xbox will set your Question pool dependent on your region but this can be changed in the options menu to one of: Germany, Spain, France, Italy or England. Alongside the regional questions there is a selection of International questions that include such things as World Cup golden boot winners and Champions League or UEFA Cup historical results. You have a choice of a Half Time or Full Time match, which, as I’m sure you can guess is a half or full length quiz.

Your XBLA Avatar will represent you on screen and you get the option of your buzzer sound (more on these a little later) and then away you go answering questions. The quicker you buzz in the more points you win (or lose if you’re wrong).

4-4-2 or 4-3-3
There are six rounds in all to a single player quiz (Full time) and these each take on a specific style or category. The sequence of rounds is not always the same but they are all included each time, here’s a brief run down. 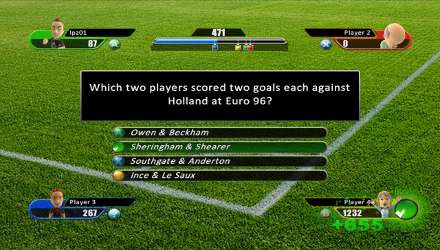 You always start with the “Kick Off” this is your General Knowledge round. You are presented with a question and a choice of four answers; one assigned to each of the face buttons, you buzz in when you know the answer.

“Get the Picture” gives you a photo on screen and a series of questions on the photo.

“Match It” displays a famous footballing name on screen and an old fashioned patch football with some photo’s on. The ball then twirls around stopping randomly on the photo’s, you buzz in when the picture matches the name.

“On Side” is your quick fire round, you have two options on screen and a brief clue pops up, you buzz A or B, simple.

“Phased Out” is another picture round where an image is phased into focus, buzz in when you know who it is.

Finally “Throw In”, you get three clues in a “Who am I?” style. When you buzz you get four options and a short time to select the correct one.

Pitch-er Perfect?
Graphically there isn’t a great deal that can be said for Football Genius, after all it’s a quiz game. Your Avatar does a celebratory cheer when you are correct and slumps over when you are wrong. There is also a short animation prior to every round which involves nothing more elaborate than a bouncing ball. The pictures, when used, are clear and the grass that is used as the background throughout looks quite nice but that really is it. 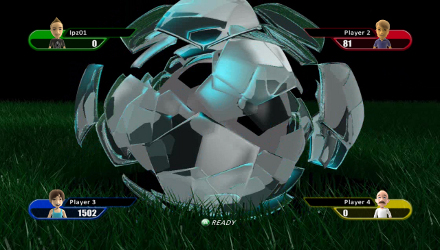 The crowd goes wild
There is a background tune that plays during the round introduction that will almost definitely drive you nuts within two or three plays. This becomes your standard tense quiz show background when the questions are displayed. You get a nice cheer if your answer is correct and a deep buzz if you are not. You have a fair few options for your buzzer noise that includes the usual Horn, Dog, Clang and Cow that you have no doubt seen on other quiz games such as 1 v 100 or Buzz. The ones to note are the Cat, (which sounds as though it’s being strangled) Glass, (which is more like someone hitting the symbols) and your new favourite football sound effect the Vuvuzela.

Us v Them
Multiplayer allows you to have a quiz with up to four players. You can again select a half time or full time match and in addition to the standard rounds listed above, you get the more entertaining multiplayer specific rounds of:

“Foul Play” which is similar to kick off but the person getting the answer quickest can issue a card to an opponent of his choice. Bizarrely, the cards are all red and you need to receive three of these before you are eliminated from participating in the remainder of the round.

“Dribble” sees the person quickest to the correct answer taking possession of the ball, if you get a correct answer while in possession you get double points and this is a real opportunity to steal a march on your opponents. 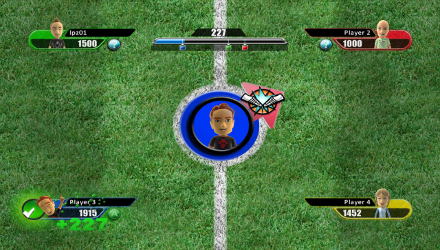 Now listen to him moan

“Tackle” is the best round. A correct answer allows you to take the same amount of points you earned from an opponent of your choice and is a great opportunity for everyone to gang up on the cocky bloke who’s in front.

I have to add at this point than in my many attempts to get some online play going with “randoms”, I have managed just two games against the same opponent in a simple head to head match. Also, on the online mode there is a menu option for DLC.  At present this is empty but it opens the door for new question packs based around specific clubs or leagues.

They think it’s all over…
I have toyed several times on how to conclude this review and have to say it has not been easy. Football Genius Ultimate Quiz is a very specific title for a very specific gamer. I am going to assume that if you have read this far into a review for a football quiz game that you are at least a football fan. With that in mind there is certainly some entertainment to be garnered from this title albeit a fairly limited amount.

The other major factor to note here is that this is not a single player game. Sure it has a single player mode but you lose the most entertaining rounds and let’s be honest; a quiz without an opponent isn’t really a quiz at all.

Multiplayer is definitely where this game hits the back of the net, ideally if you can get three more footy mad mates round for a few beers and play this the old fashioned “on the sofa” way, much fun and a great deal of ribbing can be had as part of your evening entertainment, and it is for this reason that I am ultimately saying “Try It”.