Hot Wheels, for those who don’t know, are small-scale model cars produced by Mattel. They are often used as toys in conjunction with Hot Wheels tracks that usually contain a loop (and judging by my nephew’s collection, a Shark). Cars are colourful accurate replica’s that are also often collected by enthusiasts.

Hot Wheels: Track Attack is therefore, unsurprisingly a racing game, featuring said cars and tracks and is now available on Wii and DS courtesy of THQ. So, can the game bring the colour, excitement and passion of the Hot Wheels universe to life? Read on to find out.

As a racing game, there is no story to Hot Wheels: Track Attack. The idea is to compete in various events to unlock cars, tracks and more events. Along the way you pick up Tokens that can be used to upgrade your cars in the four main categories of Top Speed, Handling, Boost and Acceleration. You can also earn Trophies by winning events that you can then enter into the online Hot Wheels Racing Circuit to show off to your friends (or provide them with ammunition as to your total geekiness).

Utilising the Wii Wheel, steering is controlled by turning the wheel, accelerate is the 2 button, brake is 1 and boost is B. The A button is used to select in the menu’s but has no feature in the race. Unfortunately the handling isn’t particularly great and the collision detection is quite poor making navigating the tracks quite tough. Fortunately the AI opponents are average at best so in that respect it balances out okay. 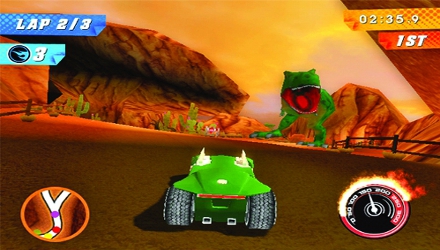 One of several bizarre obstacles

Corkscrews and loop-the-loops
Events come in five categories; you have standard Races which consist of three laps, first past the post takes the prize. Then there is the Elimination Race where the contestant in last place at the end of each lap is eliminated from the event, Hot lap is essentially a time trial, Checkpoint as you’d expect has you passing through various gates on route to the finish and Token Grab which puts you in an arena and gives you the task of collecting as many tokens as you can in a set time limit.

There are four main arenas that consist of a variety of the above events for you to unlock and partake in, which offer slightly different arenas. Big Air Beach, Road Rally Rainforest, Mad Dash Desert and Stunt City all follow the theme suggested by the name and include a mixture of flats, jumps, loops, corkscrews and the aforementioned Shark for you to navigate.

Hot Wheels: Track Attack also gives you a Track builder where you can create to your heart’s content. You start by creating a basic circuit and then adding all your speciality pieces such as corkscrews, s-bends and loop-the-loops. You can then drive your created masterpiece or race it against AI opponents before you save it. You are then able to challenge your friends on your created tracks in the multiplayer. 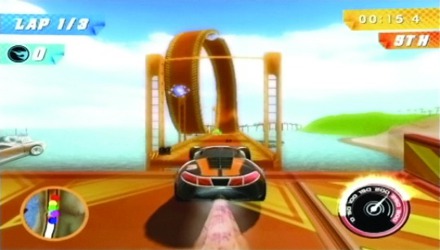 Erm... there's something sticking out my car.

Wheely colourful
The visuals in Track Attack are, in all honesty, pretty poor. Cars look quite blocky in the main; nothing like the smooth, curvy sports cars largely found in the Hot Wheels collection. In addition the backgrounds are blotchy, though colourful, and the animations are just laughable. Hit the boost button and you will see an orange rectangle seemingly attacking your vehicle. The flip looks ridiculous and when you spin your car will do a 720 without leaving the line you are on, always ending up facing the right way and rarely costing you any time; there doesn’t seem to be much point. There are also no small amount of graphical glitches that will see your chosen vehicle the wrong side of a loop or dropping into the ground after a jump.

The menu’s also look pretty average with the car collection screen summing it up. All cars are displayed from the outset with a simple padlock next to those yet to be unlocked. Unlike most racing games there is no garage for you to peruse the cars you have managed to acquire or even as much as a collection cabinet style display screen, which surely would have been easy to implement and would of added a touch of polish and understanding to the subject matter.

Attack of the airwaves
Menu music is a fairly bog standard, mellow emotionless tune that is largely unforgettable and this seems to be the theme into the races; it’s not that it’s particularly bad, it just doesn’t really register with you as there is no intensity or feeling to it. The sound effects do a job but again they hardly set the world alight; engine noises seem quite low-key considering the vehicles are essentially muscle cars and the crash sound effect is very tinny. 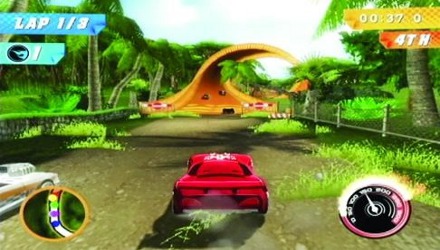 Corkscrew? I'd rather have a pint.

Multi-car pile up
Hot Wheels Track Attack allows up to four players to compete locally but unfortunately there is no online mode. As mentioned above you can race on your created tracks and also compete in any of the five categories available in single player. I have to say I’ve struggled a bit working out if this is a plus or a minus but the graphical quality remains generally the same in the split-screen mode as it is in single player.

Hot or not?
Unfortunately Hot Wheels: Track Attack is largely forgettable. I will accept that at nearly 33 years of age I’m not exactly the target audience here but the problem is it fails on almost every level. Graphically it’s poor, as a racing game it’s simply awful and in terms of just being fun it genuinely struggles.

When you consider the fact that Mario Kart Wii has been around since 2008 and not only looks better but also plays a better game, is more fun, and has easily as much, if not more, to offer, I simply cannot recommend this to anyone.