Way back in October last year, I was fortunate enough to go to Earls Court for This Is My Joystick and take in the Eurogamer Expo for the first time. Whilst there I managed to get some hands-on experience with a few promising titles that we have subsequently seen hit the shelves with varying degrees of acclaim. Titles such as FIFA, PES, F1, Gran Turismo, Killzone 3 and Medal of Honour were all on show and at various stages of development, but as I left the Exhibition Centre there was only really one game that I was thinking about; Hunted: The Demon’s Forge.

The game, created by inXile and published by Bethesda, is a third-person Dungeon Crawler that is very much geared towards co-op play. The early demo was covered in some detail by Jacob, who also had some hands-on time at last year’s E3 and we have been tracking the game ever since. The Xbox 360 version finally hit the shelves on June 3rd and I was quick to get my hands on a copy to find out if the final product lived up to the early promise.

Forged in history
Hunted: The Demon’s Forge presents the story in a slightly different way to most games I have played, giving you a basic outline at the start and tasking you with unravelling the story as you play through the game. I wont go into massive detail here to avoid spoilers but essentially it is a story where creatures from the underworld are taking humans as slaves. You will take the role of either the human, Caddock, or the elf, Elara; a couple of mercenaries who are led on a quest to unravel what is going on and why. 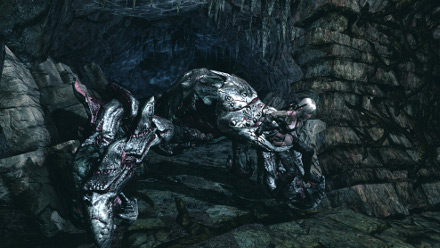 The game leads you through the story chapter-by-chapter as you follow the spirit of Seraphin, the daughter of the mayor of Dyfed, who is one of those taken by these creatures. Aside from the mysterious Seraphin, you can interact with the dead via Deathstones and their stories, along with those of rescued prisoners, will fill in the details.

Hunted by demons
Character control is standard fare and the same for either Elara or Caddock, with movement on the left stick and camera on the right. You have two buttons X and Y for light and heavy melee attacks. B is used for interaction like opening doors, picking up dropped goodies or focusing on key targets, and A is used to dive and held to sprint. In addition to the melee weapon, each character also has a ranged weapon that is fired with RT and, as with most other games these days, you can aim by holding LT. You can carry two primary weapons but only after you have unlocked the second slot, which comes after six secret areas have been explored (around half way through the campaign).

In addition to these standard attack options, each character can assign up to four skills to the D-Pad that can then be used by pressing the RB button. These skills take the form of either Weapon Magic, which are weapon based power-ups or Battle Magic; your common or garden wizardry style magic. In order to use either you must have Mana ,which is collected from crates or fallen victims throughout the game. There are three of each type of magic to unlock by purchasing with Crystals, which looted in the same way as the Mana. 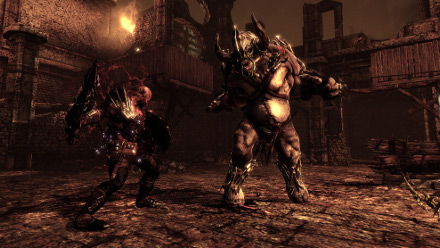 The levels, by and large, are very well structured with a balance of open space and closed arenas, but the game is essentially a linear experience. This is underlined by the fact that at various points you will be blocked from dropping off a ledge by an invisible wall or an unbreakable crate. Frustrating when you consider the fact that there are secret areas to explore that unlock coins, crystals, weapons and character level ups and are reached by breaking through obstacles identical to a hundred others that you can’t break. It leaves you swinging aimlessly at practically everything on the off-chance it might lead somewhere.

This is just one of a few niggles I have with the game which, although they don’t have too much of a detrimental effect on the overall experience they do just take away a bit of shine. It’s simple things too, like the fact that when you sprint, changing direction is akin to trying a three-point turn in a double-decker bus. You’ll have moments when you go into a room to get a crate or a weapon and spend a good few seconds trying to bump your partner out the way so you can get out again. Another thing I found a bit odd, and I still can’t decide if it’s a plus or a minus, is that any skills and items collected in any game carry into every game you play, even if you start from the beginning.

Aside from the standard campaign, there is also the Crucible mode. This allows you to build your own worlds using items unlocked in the game. It is essentially a co-op based battle arena game, where you set up a collection of closed arenas and the enemies you’ll face in them and take part in a battle of survival. All-in-all, it’s not much more than a distraction but does serve as a nice change of pace to the adventure.

Tunnel vision
The visuals are something of a mixed bag if truth be told. For example, some of the scenery looks truly majestic and you get a wonderful sense of proportion as you stand looking out across some beautifully drawn valleys and mountains. However, if you look at the bushes and trees right beside you, the detail and the textures can be a bit ropey, as if they were tacked on as an afterthought. Likewise, the character models are generally very good but some of the human characters have a bit of an unnatural shine to them. 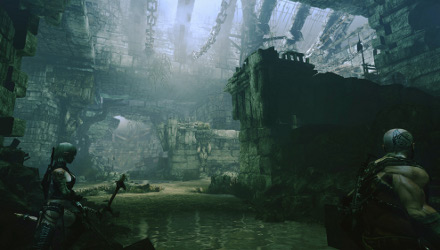 Is there a light at the end of that tunnel?

Animations are also a bit mixed with some parts of the game appearing lovingly created, with a strength and boldness that is right up there with the best titles around, but then there are other sections that seem a bit rushed, where characters disappear into walls and battles appear scripted in the most rigid fashion.

Sound of the underground
Much like the visuals, the vocals to the game can be a touch mixed to say the least. The background music at times is incredibly atmospheric with the volume and tempo directly linked to the action on-screen. As you walk through dungeons, you can hear distant sounds that let you know the path ahead will not be a pleasant one. The battle sounds are one of my personal highlights, with some of the best sounding close quarter combat I can remember. Metal Swords and Shields clank, arrows whoosh through the air with great authenticity, while some of the enemies you face squeal rather satisfactorily when you finish them off.

On the other hand it has to be said that some of the voice acting is truly awful. The main characters aren’t too bad, although they do get a bit repetitive but when you get to the cut-scenes or have any interaction with the local townsfolk. You will, however, genuinely cringe at some of the accents. It seems as if inXile wanted to cover every recognisable British accent as not to alienate anyone and have produced some ridiculously OTT sound-bites in the process. We have the Mockney East Ender, the “Farmer Giles” West Country types, the almost-drunk Dubliner, and everything in between. It is incredibly painful to listen to. 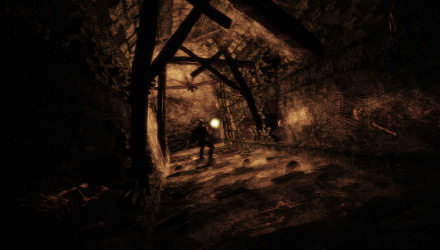 Anyone got a light?

Forge a friendship
Both the Crucible mode and the main Adventure mode can be played in Multiplayer, following the same pattern as in the single-player games, but you’ll be teamed up with a friend rather than the AI. The options are to play via Split-Screen, System Link or Xbox Live. The Split-Screen works okay, but I have not been able to test System Link. Realistically, it’s over Xbox Live that most people will enjoy the game and, if truth be told, I genuinely believe that the main campaign on Co-Op over Live is the best way to enjoy Hunted.

Not only do you lose those infuriating moments when your partner just stands in front of you, blocking the route, but when the trickier puzzles and riddles come around, you can discuss the options and work through the solution together. This makes solving the puzzles that little bit easier. In addition, awards and achievements picked up in co-op carry into your single-player game and if you open a level in co-op that you haven’t got to yet on your own, you can then go and play it yourself. 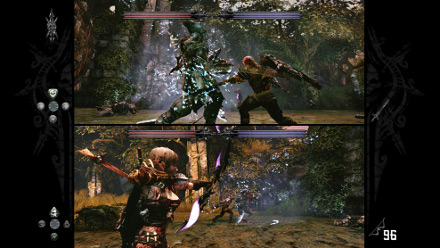 I have not experienced any slowdown in any of the games I have played online, though I have noticed that on a couple of occasions the game has glitched slightly, leaving me shooting random arrows when playing as Elara, without me touching my control pad. I was also unable to swing my melee weapon, however hard I try. These are few and far between and seem short-lived on the occasions they crop up, so certainly nothing to worry about. Though, along with the odd graphical glitch mentioned above, it just seems to show a disappointing lack of care in the finished product.

Hunter or hunted?
In my mind, I had built Hunted: The Demon’s Forge up to be one of my most anticipated titles of the year, and from this I have been left a touch disappointed. However, once I put that initial feeling aside and looked at the game through objective eyes, there is plenty here to be happy about despite the odd graphical glitch or dodgy accent.

Although there are not a huge number of chapters, the adventure mode is big, while the story unravels into an enjoyable yarn. It’s also a challenging affair, featuring puzzles that test your mind as much as your ability to retrace your steps. Just keep in mind that it’s when playing through the adventure in co-op where it is most enjoyable.