Rocket Knight is effectively the fourth title in the Sparkster series that dates all the way back to the 16-bit era, having featured on both Sega’s Megadrive and Nintendo’s SNES. This new title is now available on both XBLA and PSN at 1200MP (£10.20) and £9.99 respectively.

For those of you who don’t remember back that far, in its original form Rocket Knight was a side scrolling platform game very much in the mould of its more illustrious rivals in the form of Sonic the Hedgehog and Mario.  It even had its own take on the regular platform Genre story: Your kingdom (Zephyrus) was invaded (by a Pig Army) who proceeded to ransack villages, kill villagers and kidnap the princess Sherry. You, Sparkster, came to the rescue, defeating the Pig Army and saving the princess, hooray!

How does the new arcade version measure up, read on to find out.
Rocket Man
So here we are fifteen years on and our Sparkster is a humble farmer living with wife and child having been pushed away by the very people he saved. After he defeated the Pig Army they were left somewhat rudderless and the man left in charge, General Sweinhart, reached out to the people of Zephyrus and struck up an allegiance. Our Sparkster was not best pleased, understandably so, and voiced his concern more than once. Eventually this led to him being discarded by his people and banished from Zephyrus.

While out farming, our would be hero looks up as he turns his potatoes to notice Wolf Ships passing by heading to Zephyrus and so once again Sparkster dons his back pack and shoots off to the rescue.

Take me to the moon
You take the role of our newly un-retired Rocket Knight. The game plays in true old fashioned scrolling platform style, you can jump with A, have a short range attack; X, a long range attack; Y, and a boost; B, the only thing missing is a bottom bounce. There are fourteen levels spanning four worlds which take the form of a stereotypical platform level or a shoot-em-up level, and at the end of each world is a boss battle. The level design is fairly straight forward with the platform levels having you navigating the world, collecting Gems and beating up the bad guys, while the shooting levels also follow the 16-bit blueprint of keeping the screen moving, The Gems are still there to be collected but as you can’t travel back collecting them all for the 1up’s is slightly more of a challenge. 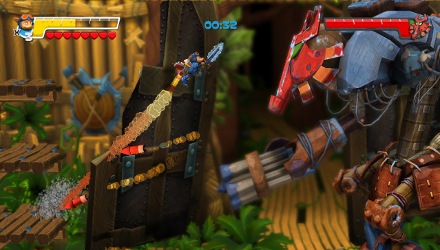 At the end of each level you will get a breakdown of what you have missed and if you ace the level an extra life, a continue, or both will be your reward. You will also find hearts (for energy) and extra lives dotted around the landscapes. Each level has a par time and there is an achievement (XBLA) for beating the par on every level; this is no mean feat!

Do not be fooled into thinking that this is going to be an easy game. Oh, it starts off easy enough, with the opening level resembling nothing more than a Sunday afternoon jaunt in the countryside but by the time I reached world 3 and the Cyberswine Labs I was swearing and cursing while trying desperately not to put the control pad through the TV.

Jet fuel
As you would expect from a game of this ilk the graphics are sharp, clear and full of colour, there is nothing to offend but likewise there is not a lot to really dazzle. The 3D backgrounds look pleasant enough and it certainly compares well with both arcade and full titles of this particular genre. Sparkster himself has a few nice animations but I’d be lying if I said there was anything here to get truly excited about. 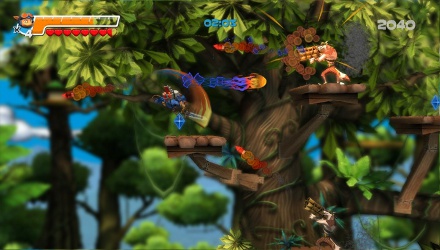 Whoosh!
In the same way as with the visuals, the sound is standard old school platform fare, there is a nice soft background melody that increases tempo and intensity when the action gets going and this becomes more dramatic for the boss battles. The sound effects are solid too but again this is standard for old school platformers, it’s certainly not going to get you going like Halo or Final Fantasy.

Out of this World
It is fair to say that at 1200MP (Xbox360) or £9.99 (PS3) this is not the cheapest arcade game around. It is also fair to say that Rocket Knight will not be nominated for game of the year. Having said all that though, this is classic platform gold. It is hugely enjoyable, yet utterly frustrating in equal measure. The level design is good, and with par times and collectables there is enough to warrant repeated playthroughs. After you have completed the level in arcade mode you open it up in free-roam which allows you to go in and locate all those missing collectibles and work on your par times. Rocket Knight has become my guilty pleasure. There is enough in it for me to suggest that its decent value for money and ultimately I defy anyone to play this and not want to go back for more.