Review: Roll in the Hole

Blizzard aren’t the only ones with Panda fever at the moment, Eccentricity Games have somewhat of a flair themselves with their latest game, Roll in the Hole. Quite where the idea of rolling a big, fat ball of a Panda around while collecting ice cream came from is anyone’s guess, and certainly doesn’t run parallel with Blizzard’s warrior monk stance. What we do have is a charming little romp that is actually quite entertaining and worth getting your paws on…

Bamboo? That’s so last century…
PoPo’s bored of bamboo. His dad used to eat it, his mum used to force him to eat it, his brother is addicted to it, but unlike other Pandas, PoPo just never quite got it. He always found that he was left hungrier after eating it, even more so than before he’d taken his first bite. As such, his palette has always been a little different from the average, and the only thing that seems to satiate him is ice-cream. Naturally.

So, feeling a bit rumbly in his tummy, PoPo rolls around various types of terrain, be it hilly valleys, snow-capped mountains or the nether-regions of space, desperately trying to fill his rather rotund frame with lots of floating ice-cream that has conveniently been left by an equally well-rounded chimp. An ice-cream trail that seems to be luring PoPo toward hole-like rifts. How have these been created, and where do they ultimately lead?

Roll, Roll, Roll in the Hole.
The control scheme for RITH couldn’t be easier. Simply, touch the left side of the screen to make PoPo roll to the left, and touch the right to move him to the right. Of course, you will need to distribute your presses evenly, otherwise our black-eyed friend is going to find himself sailing out of the screen and plummeting to his doom. PoPo will need evade obstacles and traverse a variety of surfaces like slippery ice or bouncy platforms in order to reach his goal, but he is encouraged to collect three ice creams along the way, both to improve his score and star rating on each particular level. There’s also a time bonus awarded for how quickly you blaze through a level.

Initially, the controls seem very straightforward, and initially, you’ll feel comfortable with them, but pretty soon, as you reach later levels, you’ll find it doesn’t quite offer the stability that you had originally been led to believe.

It goes without saying that a tilt function for this game would have worked marvellously. Unfortunately, Eccentricity didn’t feel the same way, and sadly, Roll in the Hole doesn’t support it. A huge missed opportunity, in my opinion, as the touch screen controls start to feel very cumbersome and awkward when you get past the easier initial stages. As such, you’ll find it absolutely necessary to take every level very slowly, unless the game requires you to create some momentum in order to reach a platform further over. If you’re in that position, you just need to roll, and pray the game is in a good mood with you. Fortunately, the game offers unlimited tries, and even allows you to skip a level if you so desire.

Despite the frustrating control set, there’s a lot of content offered here. 72 levels across three Worlds and some bonus stages added on top of that make sure that you’ll have a lot to keep you occupied. 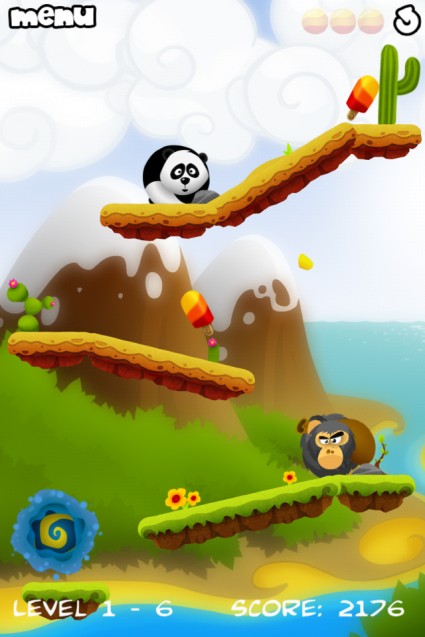 It's Panda fever at the moment...

Sleeping Panda, Hidden Chimpanzee
There are some small cut-scenes in Roll in the Hole which are beautifully drawn, and go some very small way to explaining the slightly out-there premise. These are entirely skippable, and aren’t integral to game, but they’re pleasant to watch all the same.

The game’s graphics are also quite beautiful. PoPo is an endearing lead character and the cute, vibrant xworld he is living in is rich with elegant colours and designs which can definitely go a long way to helping you look past some of the games other limitations and frustrations.

Jack Black he is not…
As you would probably expect, Roll in the Hole has a very harmonising soundtrack, which is always very happy and upbeat. There’s no referencing to Kung Fu Fighting or deep spiritual worship here. RITH strives to be as utterly pleasant and approachable as possible, and, just like with the graphics, the sound goes a long way to soothing your anger when you’re on the verge of stamping on your iPhone when the controls aren’t going your way.

My Fat Panda
While there is no multiplayer mode as such, RITH allows you to connect to Crystal, Facebook and Twitter to share your score with others. RITH also supports Game Centre Achievements and has 12 in total.

Roll with the punches?
It’s not the best game Chillingo have ever published, but Roll in the Hole is utterly endearing, and will continue to draw you back no matter how many times you put it down. RITH manages to achieve balance with heart-warming graphics, a soul-cleansing soundtrack and addictive gameplay, in face of clunky, cumbersome controls that continuously threaten to thwart your enjoyment.

Ultimately though, with the promise of more levels and enough content packed in here to begin with, Roll in the Hole is definitely worth taking for a spin.