It’s taken a long time to bring Tintin to cinema screens. Steven Spielberg first acquired the rights to the series back in 1983, shortly after Herge (the artist behind the original comic books) died. Since then, it’s been a case of scheduling conflicts and long-standing battles, but finally, this year, The Secret of the Unicorn has made the cut.

It’s been a true labor of love for all involved and, in addition to the rave reviews the film has received from critics across the board, Ubisoft have also managed to successfully convert the series into an engaging and entertaining console gaming release.

So, surely the mobile release from Gameloft is also destined to be a hit, right?

Blistering barnacles!
Tintin first appeared in 1929 and has gone on to sell over 350 million copies of his books worldwide. So, it’s little surprise that big names like Steven Spielberg, Peter Jackson, Daniel Craig and Andy Serkis are involved in the movie release. The story of the film follows three Tintin stories all sewn together, and the mobile version of the game is loosely based on the events in the film.

Throughout the campaign, you will be controlling intrepid reporter Tintin, but there are also several sections featuring his dog, Snowy, and Captain Haddock. Each character offers different gameplay techniques, with Snowy clambering through ventilation shafts and underground tunnels, and Tintin scaling across windows.

The game begins with Tintin buying a small ship from an antique dealer, thinking it would make a nice ornament to put on his mantelpiece. However, just as he is getting the change for his bargain purchase, an interested buyer appears at the stall, demanding the dealer sells the boat onto him. After being told that Tintin has bought the boat, the dealer turns his attention to our intrepid reporter, giving him the opportunity to ‘name his price’ for the ship. When Tintin tells him it’s not for sale, the dealer storms off, telling Tintin that they will meet again.

Conveniently, only minutes later, Tintin is ambushed by a thug and rendered unconscious, his ship stolen from him. Instantly assuming it was the churlish dealer (c’mon, why wouldn’t he?), Tintin tracks down his address and attempts to infiltrate his mansion to claim back what was stolen from him.

The mysteries continue…
The majority of the game is controlled via a virtual joystick in the bottom left hand corner of the screen. You’ll need to hold your finger on it and then move in the direction you want your character to move.

Surprisingly, this handles well, although, naturally, you’ll find yourself taking your finger off the screen more than a few times to avoid strain and to obtain better accuracy. Equally surprising is that the game responds very well to multi-touch. There was one occasion where I had three fingers on the screen at the same time, and the game recognized all of my intended actions accurately without complaint.

On the bottom right hand corner, are stamps which will provide you with different types of movement. There’s a blue stamp which indicates stealthy movements, walking about on tip-toe. Then there is a brown stamp indicative of sprinting, which is useful in situations that require you to be prompt.

However, there are other events in-game that you’ll need to control, such as QTE’s. These require a fast button press, and sometimes for you to swipe your finger across the screen, whether that means you’re vaulting over a log, or moving between platforms to avoid deadly mechanisms. There’s also a small section reminiscent of Cut the Rope, which works quite well.

Unfortunately, while the gameplay generally works and seems responsive, the story is very dry, with the dialogue being quite poor on occasion. It’s certainly not of the witty and charming standard you’ll find in the film, and in fact, feels as if someone is doing a rather poor imitation. 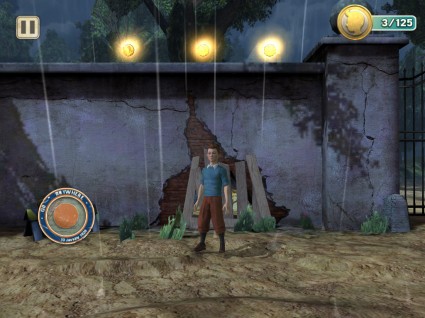 This does, ultimately, lead to some regular repetition in gaming sections, whether it’s sneaking past sleeping guards to get a key or hiding in boxes waiting for people to move out of your way. While the range in gameplay styles is quite diverse for a mobile title, the writing doesn’t do enough to keep things feeling as fresh as they should.

That said, the game mostly follows the film’s plot trail, and so it still manages to be relatively compelling, it’s just not as polished.
Another problem is that the movements are extremely transfixed on one particular area at a time. There’s no way to look around your surroundings by tilting the iPhone when controlling your character. Frankly, this was an even more baffling oversight when I watched the cut-scenes, and was allowed to use the iPhone to tilt and look at the comic strips at different angles. Whereas that is a bit of a subtle (if not pointless) touch, it would have been quite effective and useful in the game.

I also found the game to be overly helpful. I’d only just finished watching a cut-scene, and was well aware of what I needed to do, but without even asking, or having a chance to move, Snowy was showing me exactly where I needed to go. There’s a time for a game to give you clues, especially if you’ve been wandering around for a while looking lost, but don’t completely spell it out for us, please?

Nothing like a bit of animation
Tintin looks absolutely wonderful on iPhone 4S. It’s a testament to the quality of today’s mobile games, and how detailed the graphics are becoming. While it’s not of an Xbox 360 or Playstation standard, the game is fluid and attractive. In fact, it’s hard to skip the cut-scenes because you’re so entranced in how they look and appear.

The facial expressions of the characters are still a bit stone-faced and could definitely benefit from further animation, but on the whole it’s a game that really looks the part, and feels authentic to the license.

It’s also a nice touch being able to collect coins and collectibles during the cut-scenes. This always keeps the scenes interactive, making it a nice feature for eagle-eyed completionists, but also encourages you to watch them through to the end so you’re in with the story, and don’t miss a single coin. Don’t worry though; you don’t need to watch all the cut-scenes to get every coin on every level. It just helps.

A big heist of a small ship
The music is very adventure-like, allowing the game to feel quite grandiose and vast, which is quite ironic considering its linearity. This game feels as if it is running on a big budget, continuing to push way past the stigma that mobiles are only capable of games like Snake and Block Breaker. A quality soundtrack, indeed.

The voice-overs all seem very well acted, and suited to the characters. Captain Haddock is as over the top as you’d expect, and Tintin is as eloquently curious as ever. Generally, the game is spot-on!

Great snakes?
It’s hard to believe that you’re playing The Adventures of Tintin on your phone, sometimes. Gameloft have done a magnificent job with the license, and really given us something entertaining and vibrant. It’s over quite quickly and won’t cause you to break a sweat, but for a week’s pocket-money, it’s an endearing excursion, and one that will keep you pleasantly surprised throughout.