Tom Clancy’s HAWX was a flight sim set in the now infamous Clancy universe that has been used in many a good book, video and game and was released last year. This year’s sequel follows on from the original and is available now on all platforms courtesy of UbiSoft.

I was lucky enough to get my hands on a review copy for Xbox360, so I donned my bomber jacket, picked up my shades and stuck on the Top Gun soundtrack before taking to the skies to see just what this baby could do.

Fight the power
You may not be overly surprised to hear that the story mode of HAWX sees you initially carted off to the Middle East to face a group of Insurgents following the “disappearance” (*cough*-theft-*cough*) of Nuclear weapons. You take control of American, British and Russian Fighter pilots at various stages of a campaign that takes you from South Africa to Moscow in a bid to stop whatever nasty plot the bad men are planning.

Sorry that this is a little vague but frankly it is the same story that we have seen in any one of a number of war based games over the past five years, and is fairly irrelevant as the missions all play out in much the same manner regardless of which nationality you are representing or the stage of the “story” you are at. The pattern of which is generally take off, take out ground or air based enemies, possibly refuel and reload, take out ground or air based enemies, return to base and land.

The timescale of the story is also a little difficult to follow as there is no date or time stamp. Each mission begins with “A week later”, “Two days before”, “This time next week”, or something equally vague.

We are at war
The story mode of the game is played out over some twenty missions, although, as stated above they are very similar in style and execution. The opening few missions work as you’re training before you take to the skies proper and thereafter it is dogfights and ground strikes all the way. You do get the occasional change of scenery where you ditch the joystick and take control of the cannon, are charged with marking targets or following cars via Infra Red but these are the exception rather than the rule. 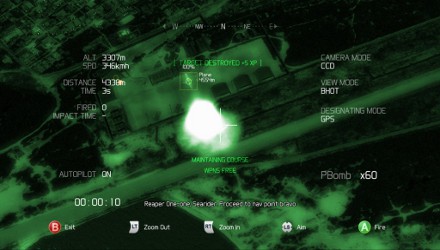 A change is as good as a rest

Plane movement is controlled with the left analogue stick while the right stick controls the camera. Your A button fires your primary weapon and B works as your cannon fire, Y selects a target while X is used mainly to initiate a sequence such as landing or refuelling. Accelerate and brake are on the Right and Left Triggers respectively and the bumper buttons are used for left and right Yaw.

Controlling your plane is at times a little disorienting and can prove tricky and frustrating as well. Having said that though it is hugely rewarding when you pull off a swift spin to avoid a missile or take out a few enemies and landing the thing unassisted, though fairly difficult at first, it gave me a kick every time.

The default view is third person and is comfortably the best option to play the game in. You also have a cockpit view which, unsurprisingly, puts you in the cockpit and a first person view which for some reason sits you on the front of the nose. I would recommend this view only to masochists and warn anyone who suffers from motion sickness to avoid it at all costs.

Aside from the main story mode there are an additional four single player options. You can replay any mission already completed or tackle it in Arcade Mode which is similar but sets some extra challenges. Free Flight is basically your free roam mode which just allows you to take to the skies and investigate the scenery without the threat of enemy fighters and last but not least there is a survival mode where you are faced with wave after wave of enemies and simply have to stay alive.

Plane Jane
Visually it has to be said that HAWX 2 is not the prettiest game you’ll see this year. Don’t get me wrong, the planes all look nice enough as do the cut-scenes (although there is a general stereotype applied to all the characters). Also, effects such as the satellite tracking equipment and Infra Red appear very authentic and detailed but none of it makes you sit up and take notice. 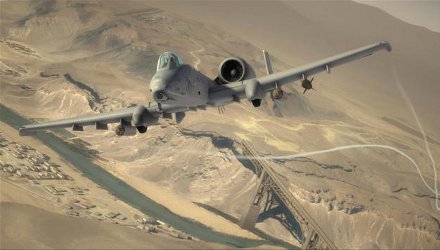 The missions themselves are often played out under the cover of darkness with night vision but even when in daylight it’s generally over water or desert so the backgrounds are quite sparse. Later in the game the levels are mixed up slightly more with mountains and one epic level over the centre of Moscow but it is fair to say that HAWX 2 wouldn’t look out of place on an original XBOX or PS2.

Jet engines
Audio is also a bit up and down. The voice acting is solid, you can hear when you break the sound barrier (nice touch) and the Jets themselves all sound pretty good, but the background music reminds me of being in an elevator or in a department store and the explosions are hugely underwhelming.

Bogies at 6 o’clock
There are a selection of multiplayer options in HAWX 2, firstly you can choose between Ranked or Unranked matches and then have a choice of Regular Match, Gun Battle and Hardcore all of which are played in a Team Battle style.

Regular is exactly that, Gun Battle takes away your lock on weapons leaving you with the free aiming cannons only and Hardcore, well I haven’t managed to get a Hardcore game yet. In fact it took me six or seven attempts and a great deal of patience to get a full quota of eight in any multiplay game mode.

There is also a co-op option again if you can find anyone online to play through it with you, and if you can’t there is always a system link option to hook up another XBOX. 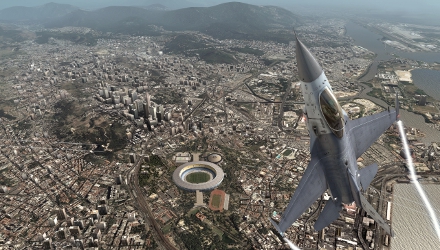 Top Gun
HAWX 2 is not perfect, not by a long chalk. Missions can be quite repetitive, controls frustrating and the multiplayer is empty already. On top of which both visually and audibly it’s basically average. Having said all that though I cannot sit here and say I haven’t thoroughly enjoyed playing it from start to finish, or that I don’t wish there were more people online to allow me to take to the skies in more structured team battles.

In fact I would say that HAWX is very much like a good woman. Stick with it, forgive its imperfections and suffer its occasional frustrating habits and ultimately it will show you a good time.