Worms. Often located in the garden, either chopped in half  by an errant shovel as you dig the flower bed, or being picked up by a hungry blackbird looking for a snack after a downpour. They can also be found in the bottom of a Tequila bottle if you look hard enough (hic) but best of all they are the stars of one of the most successful video game franchises our shores have ever produced.

Team 17’s turn-based strategy war game has been a raging success since it first landed on the Amiga back in 1995. The latest episode, Battle Islands is now available on Nintendo Wii and after I rounded up the troops, I took to battle to see if this one is a winner.

As the game opens you are welcomed by the Master Chief who will act as your guide throughout. After a brief introduction where he asks you your name and gives you the option of naming your squad members you are asked to choose your base. This will be on one of the six islands in the game and wherever you decide to base yourself will consist of the same five opening abilities. These is a Listening station that gives you the ability to obtain blueprints, the Stockpile which allows you to add weapons to your arsenal, the Chemical Plant gives you the smoke screen ability, Satellite dish to enable pre-battle map Recon and a Runway that gives you the ability to parachute your Worms into the arena. From here the Master Chief takes you away for the tutorial levels. This is just a small sign of the level of polish that Worms Battle Islands has throughout. 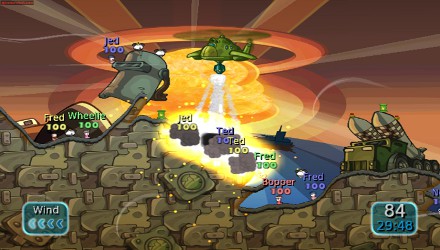 Control is performed with the Wii remote on its side as default. The Worms are moved left to right with the appropriate action on the D-Pad, with up and down rotating your aim cross-hair. Press B to zoom in or out and hold it down in association with the D-Pad to view the map in more detail. The 2 button is your action button, used to make selections in the menu’s and fire your chosen weapon. 1 makes your worm jump and a double tap performs a back flip which gives you extra elevation to reach those higher platforms. A opens the weapons menu where you can view and select from all your available abilities.

Generally the controls work pretty well and with different weapons behaving in different ways, there is plenty here to sink your teeth into to become a Worms master. I do feel I need to mention a couple of points here though that have caused me some real frustration. On numerous occasions I have been double tapping my 1 button to do a back flip in order to reach a higher platform only to see my Worm take on the role of Lemming and jump straight back off again. This is because at times it doesn’t seem to register the second button press and so you end up pressing a third time or a fourth. In addition to this I have been caught out firing a weapon into what I thought was clear air only to have it blow up in my face because a tiny piece of scenery almost invisible to the naked eye has been left behind. The fact that this particular action is usually immediately followed by a scream of “stupid” just makes it that bit worse. 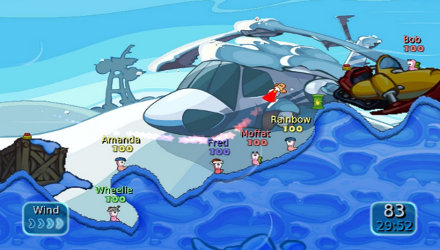 War, Huh, what is it good for!
The single player campaign sees you tackle the six battle islands, each of which consists of four battles and a boss. The Islands in question are Nuclear Test Site, Jungle Outpost, Desert Installation, Arctic Station, Underwater Lab and Chemical Plant and each has its own graphical feel and style. On top of this thirty level campaign there is also a puzzle mode to be attacked in single player that sees you take on a selection of various puzzles across the same six Battle Islands. These vary from simple “navigate from a to b” challenges to complex scenarios where you need to find a way to kill multiple enemies with a single weapon and a worm that can’t move, all usually within a pretty strict time limit. The Puzzle levels are well thought out with a good balance of different challenges and a steady learning curve that keeps you on your toes without ever reaching the level of total frustration.

At the end of every mission you receive a trophy; gold, silver or bronze, depending on how quickly you completed your task. You will also unlock various new character customisation tools that include masks, hats, backpacks and shades of pink for your little war heroes. Visit the customisation area to equip these, add different speech sets, change your victory dance or alter your chosen gravestone for when it all goes a bit Pete Tong. Unfortunately you can only have one of the accessories equipped at one time so it’s hat or mask rather than both.

The customisation area also has a weapon creator that allows you to create any of the major weapon types; Projectile, Strike, Explosive and Melee, which you can then take into later single player and versus missions. There’s even a Landscape Creator that allows you to design your very own battle ground. The weapon creator is pretty good, giving you quite a variety of different tweaks to build the perfect weapon of mass destruction. Likewise the Landscape Generator has masses of options available and with a bit of patience you can produce some really engaging battlefields which can also be played in the versus mode against your friends. 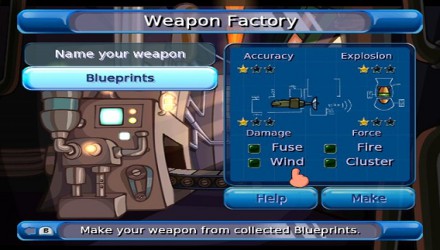 Build your own A-Bomb

The Worm has turned
Worms Battle Islands is a good-looking game; everything is clean, sharp and extremely well presented. The maps are nicely designed and beautifully drawn with fantastic colour and style. Levels have a wonderful cartoon feel to them, from the backgrounds, the actual environments all the way to the Worms  themselves.

Speaking of the Worms; they are as cute and as funny as ever with some truly brilliant animations that will have you grinning from ear to ear. The weapon actions are smooth and the explosions, however crazy they may get, always look good. You simply cannot fault it.

Sound of the underground
The main musical score to Worms Battle Islands is a fairly sultry, tense affair. This begins in the menus and is maintained throughout the missions, setting the scene for battle nicely. The sound effects are nice and meaty as explosions echo through the air and rockets whoosh across the screen. The coupé de grace though is the sound effects and speech attributed to your little heroes. As you move around the map you can hear the squeak of your Worms body across the terrain and they will scream with pain or joy at the appropriate moment. On top of that you’ll get a few little one liners which will almost definitely make you chuckle once or twice before annoying the crap out of you thereafter. 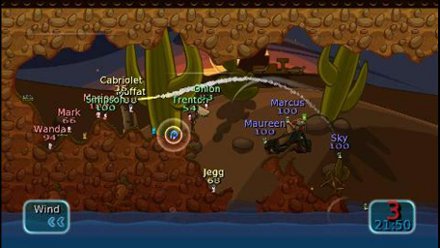 Ring worm
As big as the single player mode on Worms Battle Islands is, there is no escaping that its primary purpose is to prepare you for versus battle. This can be done locally or over the Nintendo WiFi network with up to four players in a battle. There are five different versus options available which includes the standard Deathmatch. This sees competitors face each other in a straightforward head to head, with the last-man-standing takes the glory. Racing is as it suggests; a race, Forts is for two players only and has the two squads on their own little fort divided by a pool of water, as with deathmatch the last-man-standing wins the fight. Triathlon is a best of three matchup that switches arenas for each of the rounds. Finally we have the all new Tactic games which allow you to take full advantage of your war room and any abilities you have picked up along the way. These games can also be played for an item from your opponents island and in my opinion are where the real fun is at.

The early bird catches the worm
Anyone who has ever played any of the previous Worms games will immediately feel right at home with Battle Islands, as the game looks and feels the same as ever. Having said that, you certainly don’t need to be a veteran to get the most from this game as it is extremely simple to get into and with some sixty single player missions to get you up to speed there is no shortage of training available.

Versus mode is definitely where Worms Battle Islands comes to life though, be it locally in your living room or over Nintendo’s WiFi network, and I honestly can’t remember the last time I had this much fun. In an era where games and gamers seem more concerned with achievements and trophies, Worms rekindles the old school love for pure entertainment.