WWE Smackdown Vs Raw 2011 is the latest game in arguably the gaming world’s biggest Wrestling franchise. Released by THQ and developed by Yukes, the game is available now on all home consoles. Now, I have to hold my hands up right from the off and admit I am far from a Wrestling fan. In fact I would say that prior to receiving the review copy of WWE: SvR I have watched no more than sixty minutes of the popular sports entertainment show ever. This has led to a fair few google and youtube searches of over muscled men in lycra hot pants, much to the amusement of friends, family and colleagues alike.

So the question is, does the game do the WWE proud and has it converted me? Read on to find out.

For those of you who don’t know already, Smackdown and Raw are the two main WWE television shows and brands, the main story based single-player game mode is the “Road to WrestleMania”, there are five characters to choose from each of which have their own story. You can pick the Undertaker, Chris Jericho, John Cena, Rey Mysterio or Christian. You are then subject to a thirteen week story culminating in the WWE’s flagship event.

Each week takes in a new venue and usually a ring fight. You also have “open world” access to the back stage area where you can meet, chat and fight any one of a number of other characters. Fights in the backstage area can be reasonably entertaining with interactive environment areas such as weight benches or soda dispensers that you can slam your opponent into. Each fight you win, be it in the ring or the backstage area, earns you SP which are used to develop your chosen character’s abilities in one of four key areas; Damage Resistance, Grapple Damage, Strike Damage and Momentum Gain. Any key characters you need to interact with are marked on your mini-map with a red exclamation mark and the place to proceed the game (usually your next fight) is marked with a green exclamation mark. You have a mobile phone that works as your hub, which you can bring up by pressing the Y button at any time, here you can view messages, game settings and any items you’ve unlocked so far. 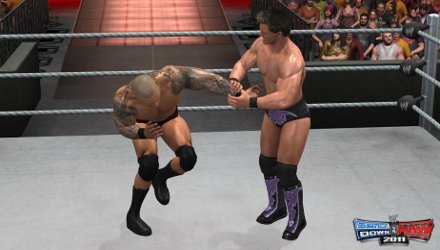 The stories themselves are exceptionally linear and the backstage environment has little to offer in the way of real interaction. Most of the characters tell you to get lost in one way or another and unfortunately every single venue is exactly the same, right down to the food in the green room and clothes hanging in the locker room. Whichever Locker room you pick a fight in, the interactive environment parts are the same and likewise, even if you start a fight in a part of corridor with nothing else in it the same soda dispenser, chair and boxes are lined up as with any other corridor fight. Also you upgrade your character by spending your SP in the Training Room but it involves nothing more than moving a slider across to the right and I can’t help but think that a few simple mini-games could have been added to break up the gameplay a little.

Hulk Hogan
Fights do vary ever so slightly from back stage to in the ring but only very slightly. You move your character around with the left analogue stick, Strike with X, Pin with B and Y is used to activate a signature or finishing move. Each character has their own signatures which you can view when selecting your character from the main menu and generally involve standing in the right place and pressing Y when you have gained enough momentum. You can also run with LB and the right analogue stick controls your grapples. One nice touch in the game is having a practice arena as the front screen much like the arena in FIFA where you can spend as much time as you want mastering your grapple moves and working out potential tactics.

Fights can be a great deal of fun, especially when you get into the non-standard bouts like no disqualification or table matches but at the same time the standard fights can become a bit repetitive. Often the best way to win is by punching and kicking rather than grappling your opponent and even though I am not a fan of the sport I am pretty sure that it’s the grappling that sets WWE aside from other fighting sports such as MMA or Boxing. 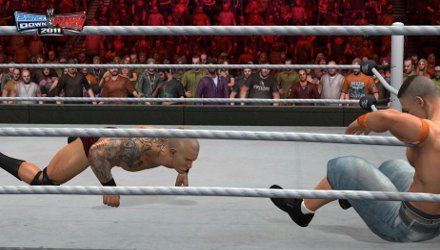 Dare we ask what's going on in this image?

In addition there is a huge customization mode within WWE: SvR 2011 that allows you to create not only a new Superstar or Diva but also ring entrances that incorporate your own highlights on the big screen and story sequences that you can upload to the community where others can view and download it.

The other major single-player feature is the WWE Universe where-by the game reacts to what you do. An entire WWE calendar is set-up with various matchups laid out. You sim or play each of the matches and depending on results and methods used the calendar changes future matchups. You can change things yourself by creating custom matchups, changing allies and enemies and can also enter your own created superstar into the mix too. Depending on the allies and enemies you make and the progression of your chosen favourites you will also see various cut-scenes before during and after match-ups.

I have to say that this is an excellent game mode that really does give you a real feeling of complete immersion in the game universe. You know that if you take a bit of extra time to hand out a proper beat down you will create an enemy which will then add a new dynamic to the game. Also if you beat the guys in the top ten you’ll get a title shot. It is genuinely well thought out and cleverly put together.

Lycra clad
Visually WWE: Smackdown Vs Raw 2011 is nice. That is to say un-offensive, steady, reasonably good. The character models are all recognisable and entry sequences follow the real thing. Each character has a video of their highlights playing on the jumbo screen behind them as they enter. Although male characters definitely look better, graphically, than their female counterparts, bodies are suitably oiled and lycra outfits are very much intact. The animations in bout are smooth and some of the signature moves genuinely look pretty good. 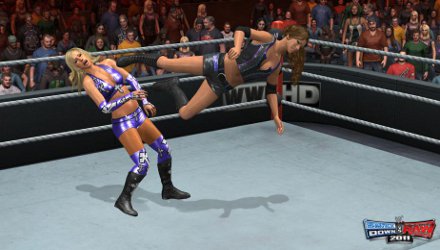 On the downside you do get the odd occurrence of an arm through the head, a foot disappearing into the canvas or the appearance of sinking into your opponents back when sitting on them. Hair appears to be pretty static even when you’re being thrown across the ring and the lip synch is truly awful. It makes an old, dubbed Bruce Lee movie look good!

Diva fever
The menu music is a good rock soundtrack which fits the game and, as mentioned above, characters ring walks are authentic which includes the music. You have Michael Cole and Jerry Lawler ringside and the commentary sounds decent but as is always the case gets a bit repetitive after a while. The crowds are a bit lame giving something of a timed rhythmic cheer that rarely seems to follow the action and most disappointing of all for me is the voice acting.

As I mentioned at the top of this review I do not follow the WWE and maybe this is how it plays out but at no point of an entire Road to WrestleMania storyline have I heard a raised voice. I mean I literally stole Triple H’s championship belt while he was fighting and even then there was barely any change in pitch to his post fight comments.

Group hugs
WWE Smackdown Vs Raw 2011 has two major online modes, the standard match-up and Royal Rumble. Standard match-ups can support up to six players while Royal Rumble allows up to twelve. Both options give you a choice of Ranked or Player Match modes and the player matches can be created in any one of the multiple styles that are available offline and use any of the ring or backstage settings. 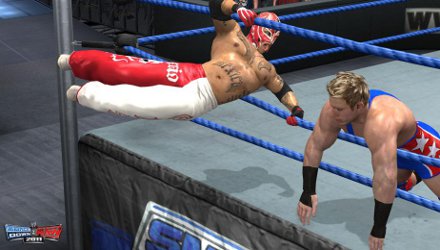 There have been reports of lag and disconnections with online matches, but I have to say I haven’t experienced anything overly disruptive in the games I have played online including a six player Elimination Chamber match. I have, however struggled to get into any Royal Rumble matches, let alone one with twelve participants, so cannot testify to the performance in this situation. When entering into the Xbox Live setup you are presented with a notice that the developers are aware of the problems and that they are working on a patch to be released shortly to rectify the issues.

Whupass!
There are some graphical glitches within the game that I find difficult to understand with current generation hardware and a game that doesn’t really push the boundaries in terms of graphical prowess, but they do not have an adverse effect on the game. Likewise the “Road to WrestleMania” mode is generally a little dull and often quite repetitive. Having said that, the WWE Universe is a genuinely enjoyable game mode and there is definitely some fun to be had online.

Overall I was pleasantly surprised by WWE: Smackdown Vs Raw 2011, it isn’t going to convert me to the sport but as a light-hearted, entertaining member of the beat-em-up genre it does have something to offer.