There are plenty of puzzle video-games in the market so it’s always interesting to see what a new entry can offer. Rising Star Games is braving this already competitive genre with its latest offering, Shifting World. Will this prove popular with puzzle admirers, or will it go unnoticed among the sea of puzzle video-games already out?

Think before walking into a stranger’s mansion
The story for Shifting World is quite simple. The main character is suddenly pulled into a parallel dimension, after going through an abandoned mansion door. Turns out the invitation he received was part of a mad man’s elaborate trap to see who can escape his parallel world of deadly puzzles.

As with most puzzle video-games, there isn’t a lot of story to go on with. Some story elements are given at certain points, like when a supporting character starts helping out. This adds interest, as it makes you want to find out more about the story and the reason behind the existence of the parallel world.

Shifting in black and white
As the name suggests, playing Shifting World consists of shifting between platforms. These platforms are easily spotted due to their distinctive colours. It’s certainly an interesting idea, since it’s possible to literally get a new perspective of a level by swapping between black and white platforms. It’s rather confusing to get the hang of it at first, especially since the platforms are essentially the same, but viewed from different angles.

Perhaps that is why the developers feel it’s necessary to guide players with arrows throughout levels. It’s not like these arrows spoil the fun that comes with solving each puzzle, though. New levels bring tougher challenges, and you’ll take longer to find the exit door as a result. 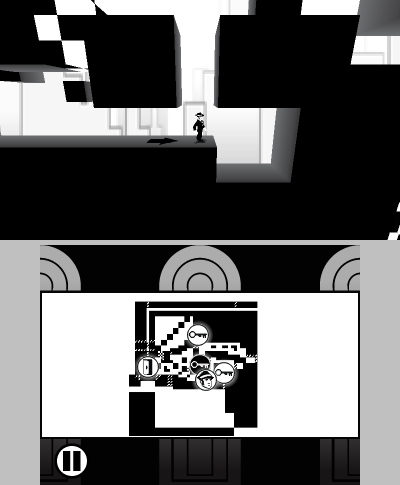 Time to get shifting.

New obstacles appear in later levels, but these never feel like they make much of an impact overall. Blocks that move when the player shifts under a number, for example, don’t feel properly implemented. It would have been better if such ideas felt like part of the level, rather than obstacles introduced to slow down progression.

This is easily spotted in the level design when playing for a prolonged amount of time. Obviously it’s a hand-held title, but that doesn’t mean that everyone is going to play it in short bursts. It’s not really clear what later levels need; at times players will literally just navigate a level hoping they somehow luck out in finding the way to the exit.

Perhaps it doesn’t help that the character dies instantly when falling into spikes. What’s worse is that most of the time, this happens because the character isn’t so proficient at jumping. Perhaps he should have taken some jumping lessons from a certain famous plumber. Dying will mean having to restart a level from the beginning, which is a tough pill to swallow in certain levels where it literally takes ten minutes just to go through the various steps required to get through a section. 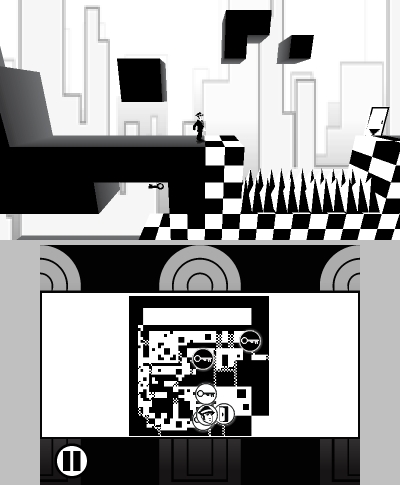 Watch out for those evil spikes.

Fortunately, Shifting World has the Time Attack mode where players can see how quickly they can finish various levels. The main Adventure Mode is also not short of levels, with seven worlds filled with many devious puzzles. Essentially, it feels rewarding to get through some of the tougher levels; however, it would have been better if it didn’t feel so repetitive after playing for a while.

Get that retro feeling
Shifting World favours a minimalist approach when it comes to the visuals. The whole world is black and white, a bold decision considering that it’s not often that a video-game only makes use of monotone. However, this is a double-edged sword since it also makes for a bland experience over time. There are only so many black and white platforms that someone can see before it all starts to look the same.

Not even the 3D effects can make it easier to differentiate between levels. Only menu options and some boxes really stand out when playing with 3D effects enabled. It’s not that the visuals in Shifting World are terrible; they look very stylish and are unique when compared to other puzzle video-games. Yet not much changes in terms of background images and other props. Some different patterns for the platforms and backgrounds would have improved this. 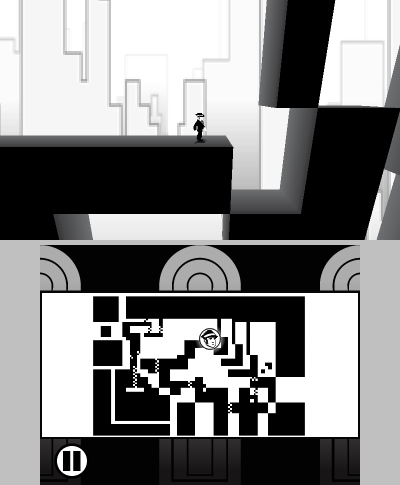 Doesn't matter if it's black or white.

It might not make much use of the Nintendo 3DS’ 3D effects, but it’s still possible to change between 3D and 2D platforms in later levels. It’s a quirky idea that makes it more enjoyable to play these levels.

Music fit for shifting
There really isn’t much to discuss about the music in Shifting World. There is a jazzy rendition in the main menu and an upbeat music track heard in the levels. It’s not enough to warrant putting people off playing it, but it’s nothing memorable either.

Minimal world
Shifting World is actually quite fun when played in short amounts of time. However, it all starts to fall apart once progressing to later levels and realising that it doesn’t really change much. It does get tougher and there’s a few new ideas introduced, but it’s not enough to make everyone play it to the end.

It’s definitely worth playing for those that enjoy quick bursts of gaming on the move, though. Shifting World is a video-game with some good ideas that sadly never quite manages to make the most of the potential it has.