The shooter genre is pretty new territory for Nintendo; the online shooter even more so. The likes of Call of Duty and Halo have dominated the area for years, leading many to abandon all hope of ever being competitive – yes, I include myself on that list.

Luckily, these new upstarts have crafted the online shooter you should play if you don’t really like online shooters. Splatoon is a game where killing all opponents all the time isn’t the aim, though it certainly helps, and allows you to feel competitive even if you never get a kill.

The idea is simple: two teams of four compete to cover as much of the map as possible with ink from various weapons. The setup for this is that you are teenage squids who can turn into humanoids. This doesn’t matter in the slightest; it is just a function to get everything to give the action at least a bit of context.

To cover said map with ink, you use a variety of weapons, such as the Splattershot – a basic machine gun, but then you have the Splat Roller which is slightly overpowered in my eyes and lets you run around painting everything in your path. There is a sniper rifle equivalent and a powerful .52 cannon, but matches are fairly fast-paced so I found these to be not so hot. More weapons unlock as you level up and find them during the single-player mode.

You have the ability to revert to squid form and swim through the ink already laid down. This allows you to move quickly through your own team’s colour, but hit the opposite sides and it slows you down and hurts you. Matches where one side dominates part of the map quickly can be won easily, though I have seen it where it is possible to come back from behind. 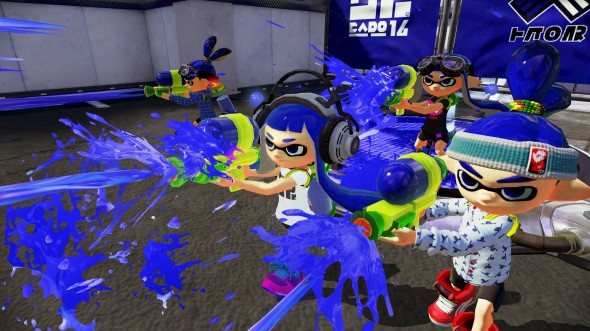 Shoot everything, whether it moves or not!

There is a single-player component, as well as co-op. The single player is a series of missions that use the game mechanics in interesting ways, with a light story revolving around getting the ‘Great Zap Fish’ back. It’s hokum at best, but this mode does play around with basic shooting a bit and is fun, though the final boss fight outstays its welcome by a fair margin.

Most boss fights in the mode work on a three-stage basis; the final boss doubles that and introduces more things to deal with at each stage. It gets annoying quickly and fairly repetitious, and I was more thankful rather than satisfied when I finally beat it. Aside from that, the single-player mode is pretty cool and I enjoyed my time with it.

As with most shooters, the meat of the game is the online mode, however; and it is here you will have the most fun. Splatoon feels different yet completely familiar, with weapon and equipment unlocks and various maps to play on. The downside, dependent on your point of view, is that this content isn’t exactly massive.

As a Call of Duty player who finds unlocking everything just kind of annoying, and once I find one gun and loadout I stick with it, a lack of a huge list of stuff to get isn’t a problem for me. However, if you are one of the people who like always getting new things and trying them out, you might find that the content is worn out quickly. 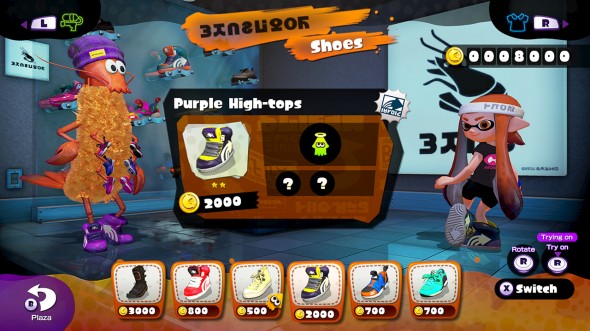 The correct loadout is still important

The biggest issue with the content comes not from weapons or equipment though, but from the maps. Each day you get two maps to play on, and they rotate each day. You might however get one of the same maps again due to there being only five total as of this writing. While this makes for a package that feels a little light at times, it does allow you to learn the best routes around each one, finding all the nooks and crannies to really figure out how best to play.

This is also what makes it such a great online shooter to play if you don’t like them. There aren’t a ton of maps to learn, or a ton of weapons to master. You get the content presented, leaving you to simply enjoy the act of playing, which, being a Nintendo game, is joyous. You can feel competitive from the outset, the game giving you the ability to contribute rather than continuing the spawn and die loop that so many other games lock you into.

Having said that, it can fall into the same trap as those other games. I have spent my last few matches being steamrolled by the other team who were a much higher level that I was. I am not sure if the matchmaking has become a problem or if there aren’t enough low level players to create a match with people around my skill, but I was finding I was getting splattered a lot by players ranking way above me, and my team was unable to carve out any kind of lead because half its number where relatively low level.

It’s an easy pit to fall into, and can spoil enjoyment if it becomes so bad players feel like they can’t win at all. Yes, there will always be people who have more time to play than others so will naturally be better, but the matchmaking should sort that problem easily enough. If it doesn’t, the game has problems; but for now, I am still having fun. 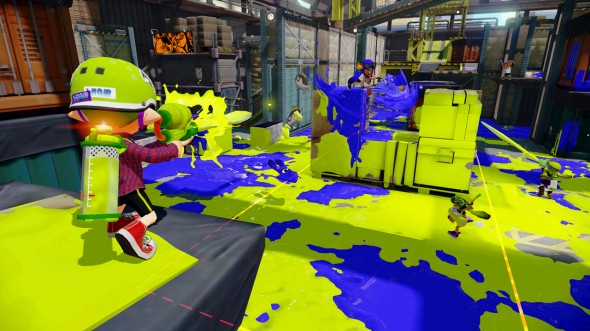 It can be easy to get splattered.

Matches only last a few minutes, so half an hour with the game will get you a decent amount of games in and a fair bit of XP depending on your skill level. The great thing is that because there is little to no communication allowed, the toxic microphone banter other games possess is non-existent here, and you can just play, as much as you want.

Graphically Splatoon is probably the brightest shooter I have ever played. Even before maps get covered in ink from both teams, everything is nice and colourful – harsh realistic battlefields this ain’t. Once the ink starts flying various colours are splashed anywhere they stick, and it is cool to look at the mini map and see both sides slowly cover the map.

Sound-wise, nothing really stands out, if I am being honest. It works and frames the action, but NPC characters talk in nonsense which is then displayed in text, and weapons fire ink so have little need to sound gutsy and powerful. It is perfectly workable, I just don’t feel myself humming the music during the day. One thing that does stand out is the launch of the Ink Strike special attack, which comes with a sound effect that rightly makes you run for cover.

A little, yes. Especially if you don’t turn off the motion controls that are enabled by default, which make you move the gamepad to aim and I personally found annoying. Spraying and praying is actually core to any match though, so hitting opponents isn’t the main aim, hitting everything else is – and that is what makes it fun.

Ultimately, Splatoon is a great online shooter from a surprising source. It doesn’t provide hours upon hours of killing, taking a different track to arrive at the same place. Matches are only a few minutes long so you rarely hit that wall of feeling like cannon fodder for better players and feel like you can always make a difference to any given match.

Will it change your mind on all online shooters? To be honest, no, but fun is all but assured and without fears of distasteful community interaction, Splatoon is a must for anyone exhausted with the bigger names of the genre. An absolute delight, especially if you are looking for an excuse to pick up your Wii U again.